I started looking for vegan places during the drive up to Vermont for the wedding weekend.  I wanted a place not too far of a detour and between the car's navigation, my TomTom and two iPhones came up with The Alternative Bakery in Rosendale, NY.  I had never heard of Rosendale but it was near New Palz and Kingston, (their former home actually), and after twisting my brothers arm nearly halfway off we left the comforting boredom of the NY Thurway and followed a slow truck down country roads for half an hour, driving right by the bakery and slide into the empty parking lot of a place with a big "vegetarian" on their sign.  We found the Rosendale Cafe, which was closed and thinking it was some tear in the space time continuum, thought it was the bakery in a new location with a new name.  Being the determined explorer I ventured down the, (it's really the only word for it), quaint main street and came upon the prize.


This is what a perfect bakery should look like.  No commercial operations, not humm of machinery, but two guys working at making good things.  There were non vegan options and heavy egg centric breakfast items also but there were vegan cupcakes, muffins, breads, foccacias, and cakes.
I was starving so went with the vegan chocolate cupcake.  It was also gluten free and I'm not a great big fan of the grainier consistency of non wheat flours but this had a rich chocolate flavor.  The center was still frozen but that really didn't detract from it.  They took it back and put it in the oven and heated it up. It was good warm, it was good frozen.  Tastewise it was a hit with me.

We took several other cupcakes including a blueberry and other chocolate.  We took 3 foccacias for the road.  The eggplant and onion was cut up.  (It never made it to the car).  The other two which did make it all the way to Vermont were the artichoke with olive, and the tomato and basil with rosemary.
This was some of the best bread I have ever had.  It was light, tasty and had a perfect crust and crumb. 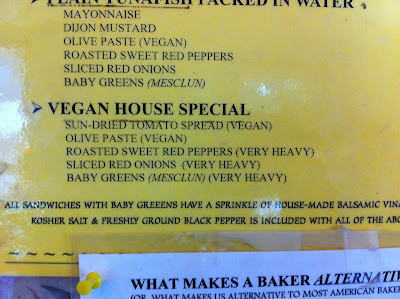 My breakfast was the Vegan House Special.  I had the choice of slicing a foccacia in half and using the top and bottom as a sandwich or using a mini baguette.  I opted for the second since we had already grabbed 3 foccacias for the road.  The baguette was crusty and perfect with the filling.  The olive paste was deliciously salty and the sun dried tomatoes paired perfectly with sweetness fro the onions and roasted peppers.  The balsamic added another note of deep flavor and a touch of different sweet.  It was a great sandwich and I wished I had a container of the filling to eat with a fork over a salad.  These next pictures need no further words. 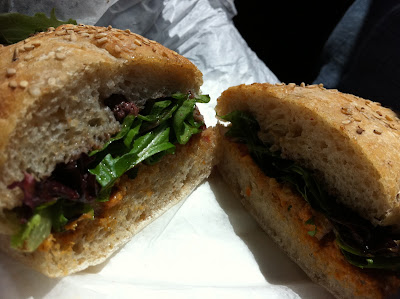 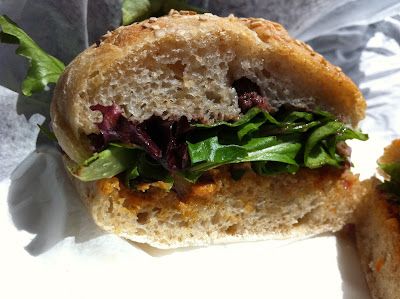 If you're anywhere in the Hudson Valley you should definitely make this a destination for some vegan treats.  It's the kind of place you want to make a stop at on the way home too.

Ooh that sounds so delicious! I absolutely love foccacia and of course chocolate cupcakes. Mmm.