First of all two of my favorite words are taco and bar.  Not really but it wasn't called chimichanga bar.

There is a rule somewhere that says, basically,  all good things shall start with, a pet peeve.  Why did I have to ask for the vegan menu?  Why was there nothing in the menu even saying "Hey, look what we did!!!!"  I came because I knew there was one but this just isn't right.  I think both menus should be given to every single customer.  Let them know about it.  Let them have the choice.  Let them think, "Hey, I know a vegan," or even, "Didn't Oprah do a vegan thing?  So this is vegan?"  Whatever.  Don't keep it a secret.

Now for the meal.  Yesssss!!  Was it the greatest mexican food I ever ate?  No.  The whole experience was great.  Fun.  Delicious.  Cool.  Part of a happenin'.


The Black Bean Soup was an ok rendition of the soup.  Although it had a decent flavor I didn't think it had any high points of flavor. 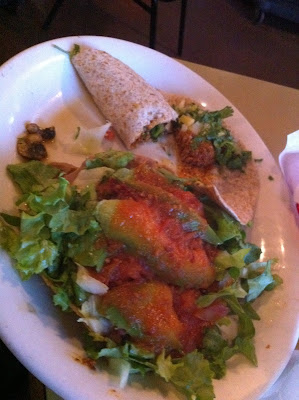 and on the same plate ...
Soy Tacos al Pastor 1.59.
I thought at first I had a plate of a Soy Taco with a salad. It was funny in a way.  I wasn't even sure what I had because to me a taco is a hard crispy shell.  This was wrapped in a soft whole wheat, (my choice), tortilla and filled with cilantro, onions and pineapple.  It was pretty good.  I like soy chorizo but I know people who don't and that's the primary flavor of this dish.


This was a solid but standard dish.  I thought it was salad so of course was surprised when I found my dinner under there.  Had I really read the description I wouldn't have been so surprised.  But I chowed down waiting for my entree.  A red chipotle sauce was an interesting salad dressing and I wasn't sure how well it went with the richness of the avocado.  Then the crisp fresh greens and finally down into the meat of the dish.  The refried beans, soy chorizo and grilled veggies made for a nicely combined meaty filling. 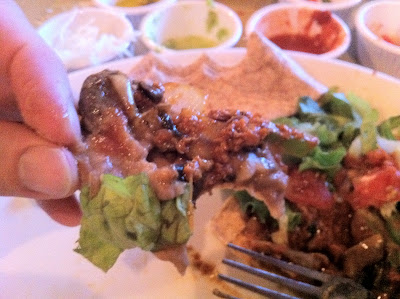 Overall my vegan diner at a non vegan restaurant in Austin was a really fun and nice experience.  There are many vegan places in Austin, including the Vegan Yacht, that I'd like to give a go to should I have the pleasure of another overnight there with a less, "animal insistent" pilot.

I'm glad you enjoyed it! I've had the same thought about the lettuce. It's a bit much.

The coffee shop is part of the Great Outdoors, which is a garden store.

Next time you come, definitely go to the Vegan Yacht. It's in a food cart lot like the one across from Guero's, so whoever you're with can have lots of choices if they're not willing to eat vegan.

Thanks mollyjade. I really hope to spend more time in Austin. It's a very vegan friendly city and I look forward to trying a few more exclusively vegan spots.

I agree wholeheartedly that Guero's ought to just give out the vegan menus with the regular menus to everyone who comes in. I've only been there the one time, but it was so good! I was thrilled that they had a locally-made vegan queso (Food For Lovers, I think), along with the very expansive vegan menu.

I second Mollyjade's suggestion about the Vegan Yacht, and will add Bouldin Creek Coffee House (which, while not 100% vegan, is all veg and has a ton of amazing vegan options, like a tofu "Renedict".)