Juicy Ladies, I stumble into a vegan/raw/organic birthday in Woodland Hills , CA

For some reason, on this trip, my culinary discoveries were made while the girls were out buying things. I found The Pizza Cookery whilst California was being lightened of their excess shoe inventory and found this oasis while the shopping sharks circled the overstock of bathing suits.  All I wanted was a nice green smoothie, Happy Cowed the area and Juicy Ladies was 2 blocks away from the bathing suit shop.  I pull into the parking lot and there was nary a spot to be found.  Could it be because the Starbucks shared the lot?
Possibly but many of the spaces were taken up by tents and tables.
Apparently having fun at a "HAPPY 2 YEAR BIRTHDAY" party trumped finding a place to park while attending said party.  I sort of left the 4 ways on and shimmied next to a truck and a vacant handicapped spot.  The band was playing and sample tables were set out, (well, tables containing samples were set out), vendors were vending and the place was a-hoppin'.  I smile at the thought of California drivers and lack of road capacity and parking lot spaces.  I also think cars and driving are too high up on the list of things people in California put on their list and smile that the Juicy Ladies prioritized correctly!!
Inside is a counter and refrigerator cases.  There are many juicy ladies working behind the counter, juicing and prepping.  There was a certain buzz going on and a constant flux of people.  This was exactly the kind of place I dread.  I could significantly lighten my pockets if I wasn't careful!  And I wasn't.  My juice was kale, beet, apple, ginger, and carrot.  I don't know if it was on the menu, just a few things I felt like having.  I also ordered a mock tuna wrap, wrapped in Romaine and picked up a couple of containers of Kale Salad from the cases.

I found it amazing, although it was Southern California, and such things should be expected in Souther California if anywhere, that a raw organic place was so busy.  I was happy that it was, just sort of not expecting it.  It was also nice to see the cross-section of people there.  Not filled with grungy hippy types, although I did know a few hippies who weren't grungy in my day, but a cross section of people who found themselves there for whatever reasons.  It's nice to see the vegan/raw/organic movement growing first hand.

I sampled the three items below.  I thought the Kelp Noodle was very sea-weedy (duh, kelp!) and enjoyed the Pesto but my favorite was the Kale.  Perhaps I'm just getting more attuned to when my body needs coffee and when it needs greens.  I can think back a few years when I would no more think of eating raw kale than I would think of chewing on a chair leg, but now the thought of a lightly dressed pile of kale with some seasoning, garlic, fruit, a sweetener and a spice or two is something I actually crave.  I guess you can teach an old dog new tricks, or at least an old dogs palate. 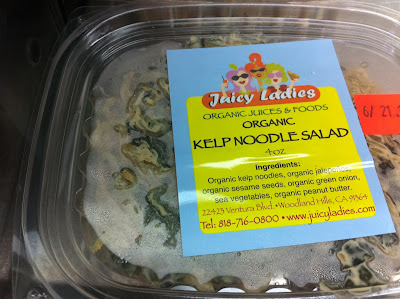 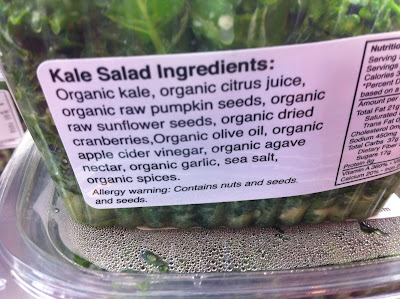 I thought the concept of wrapping a wrap in lettuce intriguing.  Not that I couldn't imagine the crunch on the raw filling but was just wondering how it would hold together.  The other question I always ponder is why we vegans have an unceasing habit of naming things after foods we no longer eat. This was a mock tuna salad.  It was delicious.  It had a crunch from the grated ingredients and a nice creaminess (nut  or seed puree binder I'm guessing), and had a perfect essence of the sea from (?) kelp.  But, it tasted nothing like tuna.  So I wonder why we don't call things "Sea salad" instead of "mock tuna", or light patty instead of "chik'nish".  You get the idea.  We know it's not chicken and chicken eaters aren't going to be fooled by leaving out a vowel. Not criticizing, just pondering. 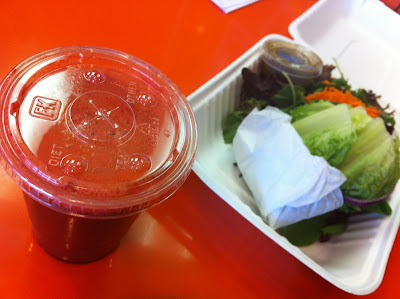 Oh, and the wrap held together much better than I thought it would! 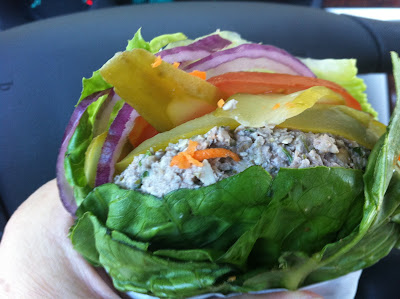 If you're looking for some raw options with really happy and friendly service, delicious fresh options that you don't find in too many places, definitely stop by the Juicy Ladies for lunch a few times a week!  I'm looking forward to my next Van Nuys trip and my next quick stop at JL.