Happy Cow to the rescue.  The girls were going nuts at the Off Broadway Shoe store.  I just don't get it. I have a pair of work shoes and a pair of sneakers.  When I wear out one I'll head down to Moo Shoes and get another.  But it was a feeding frenzy and that made me hungry so I Happy Cowed and found a veg-friendly place a block away.  Yes, one block.  Life ... ya gotta love it.
The Pizza Cookery is an interesting venue with white Christmas lights aglow and new antique signs posted on the walls opposite a picture of Nathan's in Coney Island with it's own in-picture lights.  All this is tempered by down to earth sawdust on the floor.  Which is reminiscent of old time steak houses.  Hmmm.  I love a little bit of juxtaposition. 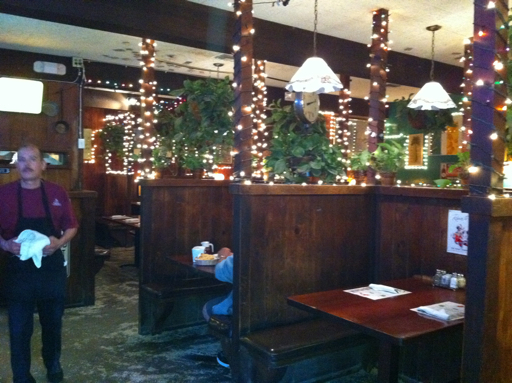 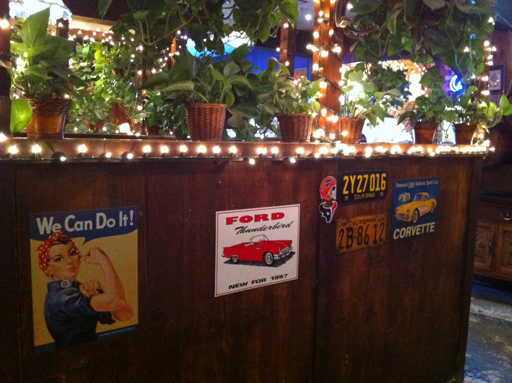 This isn't a pizza shop trying to slide into the "veg-friendly" category with a few vegetables thrown on a pizza.  (Arrrrgh!  I so friggin hate that attempt to fool me into driving to your establishment only to disappoint me.  It won't work. Although I hate to because it spoils the "adventure now I make a call or look up your menu online and all it does is WASTE TIME because most of those who try and come up under the "vegetarian" banner don't even have a non dairy cheese!!!  End rant).  But The Pizza Cookery is a pizza shop with TWO VEGAN CHEESES.  This is a place where I can get vegan eggplant parmigiana.  That means no egg wash to hold the bread crumbs seasoned with cheese!  That means gardein in sandwiches and "chikn" parm and "chikn" Philly Cheese Steak sandwiches.  That means vegan salad dressing.  In a way I hate a menu like this because when you go to a place for a light snack and end up wanting to order everything and that's not fair either!  (Waaaaaa!)


Of course a light bite starts with ... garlic knots.  Hot right out of the oven with a side of earth balance.  How.  Do.  I.  Not.  Eat.  Six.  Garlic.  Knots?  I did find the insides a bit on the undercooked side and still a tad doughy but I'm not going to let that stop me.  The next day for a party they were cooked all the way through so perhaps they come out of the oven that way and are supposed to finish cooking at the table where normal people don't put scalding hot bread in their mouths or exhibit a total lack of self control.  Perhaps they were just undercooked.

Then it was put before me.  I swear I thought the ceiling was going to open up and a heavenly sunbeam come shining down on my food.


The next day I ordered a tray of their Chickn Philly Sausage and Peppers. The choice was that or the Chickn Parm, both made with gardein.  It took a while to explain that I wanted just the contents of the sandwiches and not a bunch of sandwiches.  It was served in one of those big tins that could have been popped into one of those holders with the sterno cans underneath. Daiya cheese covered the peppers and onions.  My only critique of the dish was the gardein was cut into chunks and probably would have been closer to the original if it had been shaved and sauteed up with a bit of crisp ... then again crisp is hard to do in a tray.  The flavor was nicely sweet from the onions and I thought it was delicious although didn't garner much of anything at the party except silly vegan comments.  I find it interesting/puzzling/frustrating when someone wont taste something because it's vegan.  (The day before when we were talking about food amongst the family my stepdad pronounced, "I"m not eating a vegan meal!"  As my daughter says, "Take a chill-ax pill."  Anyway, I forgot the picture of this dish. (sigh).

I did want to thank the staff for sharpening the pencil and working out a price that reflected that it didn't come with pasta like the other trays.  Definitely a place that understands vegan and customer service.  I will not leave the valley without a stop at The Pizza Cookery and hope you put this place on your list.

This is a place where you can go and get your vegan food and the others can eat what they normally get in an italian place.  Although the owner Jason is vegan and we talked a bit about the care he puts into making sure vegans get what they want, (and not what they don't to the point of making sure his sugar is vegan after he discovered they use bone char in regular sugar), I still find it interesting when I'm asked if I want meat sauce or marinara sauce with my vegan dish.  I guess it shouldn't be a surprise because I've been asked that by so many who don't understand veganism.  In this case it was clearly asked because of people asking for vegan food with some non vegan choices.  This was asked for clarity to make sure I got what I wanted and not because of confusion or guessing.  With a vegan at the helm I was pretty sure the staff was well trained ... and rightfully should be a magnet for vegans in the valley.

It tasted better than it looked Ali.