Hunan Cottage is your basic Chinese restaurant with a selection of mock meats on a separate menu.  It's a bright, cheery place, (unless you take exception with the fish tank), that calls out suburbia.  There is acre after acre of floor space between the tables, and this much real estate would never be allowed in NYC.  It's almost lonely but nice to know your conversation isn't being shared with 6 other people.   There was only 1 other table occupied when we went.  Our waiter was indeed attentive but not intrusive.  Hard to say what a friday night might be like as I've seen the line out the door.

One bone to pick is that we were given standard menus.  I had to ask for the vegan ones.  Once again, I ask, "Why?" 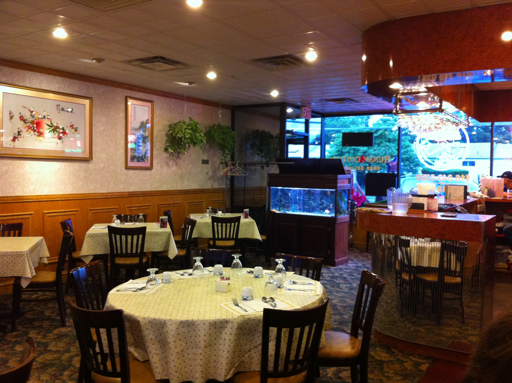 For our appetizer we ordered the veggie dumplings and mock calamari.  They were out of the calamari and the dumplings were the usual doughy,  (my speed), wrapping with a mixed greens, bok choy, and mushroom filling.  Not overly bursting with flavor but a nice holder for whatever sauce you might fancy.
We ordered 3 entrees: Sesame mock chicken, Orange flavored mock beef and the Buddah's Delight.
Both of the mock meats were pretty standard.  The chicken was a chunky style and some pieces were a bit chewier than the others.  The beef was a sliced style and had a nice chew to it, just a bit softer than jerky.  Both sauces were the thick gloppy-ish (I also like a little bit of glop), syrupy sauces.  Both were a bit on the sweet side with the Sesame chicken being a bit less so.
The Orange Beef had a thick sauce which was more like a glaze.  It had a nice hint of orange but I found the dish had none of the usual heat.  I mean not one chili pepper.
The Buddah's Delight was also served in a thicker sauce.  I have had it a few times previously and it was in an almost light broth.  This was the third sweet sauce and was a bit of an overload for me but whose fault is that?  The veggies were fresh and cooked perfectly, just to the point of soft yet crisp.  Broccoli, mushrooms, water chestnuts, zucchini, peppers and corn.
I think the Hunan Cottage is a restaurant where you'll find what I sort of call run of the mill suburban Asian food.  It's middle of the road spice profile designed to not offend more than to stimulate.  It's good solid food though and there's nothing wrong, in my book, with dipping your food in chili oil or mustard. It's certainly not going to blow my socks off but neither is it going to be less than good food.  It's a solid place to go with mixed diners who aren't looking for a vegan meal.  I did ask and was told that there is no egg or dairy in the mock meats so for my money this place is definitely on the list with an eye towards ordering some of the less sweet dishes.