I tweeted (@veganpilotmarty) about where to eat in Tarrytown, NY and got a great bunch of suggestions from http://www.tarrytownthirdfriday.com/ (@Tarrytown3rdFri).  So first off, thanks! 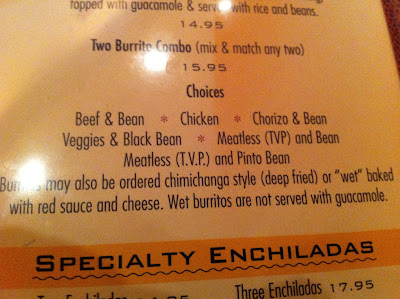 We decided on The Santa Fe Diner, a Mexican place offering TVP choices on the menu. Whenever I see that I figure they know about vegan stuff.  Our waiter David certainly took care of making my vegan choices show up on my plate. Thanks to you too.

It's right off the main drag downtown and if you have trouble finding it just ask Pancho, or Mario, (or Bob) sitting out front.  I'm pretty sure he's got a six shooter under his poncho. 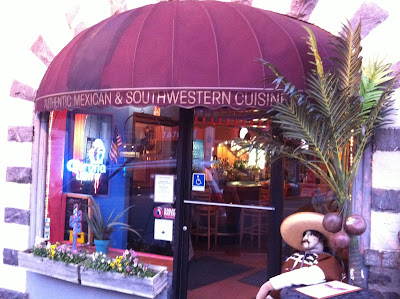 Tables along one wall and and a bar on the other.  I loved the primary color motif.  Happy place.  Well of course it is, they have TEQUILA!

The first dish was of course the requisite chips and salsa.  The chips were crispy and the salsa was primarily chopped tomatoes with very subdued other flavors.  It was a great salsa for the milder palates. 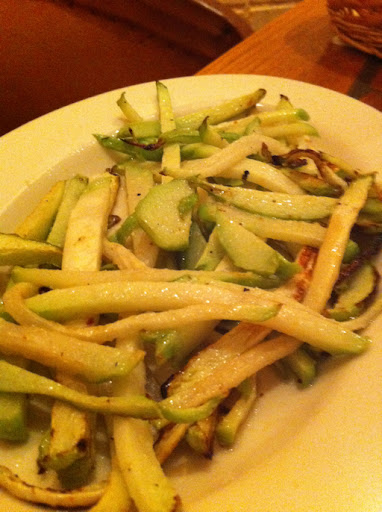 I noticed grilled cactus leaves on the menu.  "You have chayote?" I asked.  Yup.  I had a jar on my shelf for years and never actually ate any of it.  I was too scared and had no idea how to cook it.  I ordered a side, David accommodated of course, and they were amazing. Crispy, coated with oil, seasoned, and broiled for a few minutes, a cross between apples and squash.  Some were caramelized adding a sweet bite every so often.
There were two dishes I wanted to try.  First I wanted a TVP based dish and when I saw mole sauce on the menu I asked David to see if it was vegan.  He had to check but it was.  Conundrum.  He solved it by suggesting I get both.  Why cant life always be this easy? 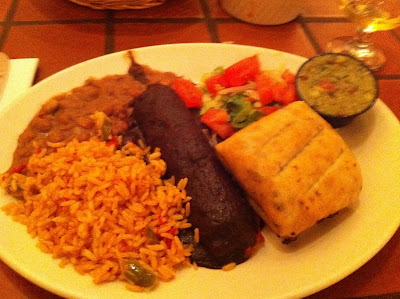 The only part of the plate that wasn't excellent was the beans.  I thought at best they tasted like canned with no flavor or seasoning to speak of.  Everything else on the plate was stellar.  From the guacamole, a creamy not too smooth, not too chunky, to the salad, crisp and vibrant, to the rice, perfectly cooked with peppers adding a nice touch of sweetness, all the sides were perfect.  The mole enchilada and the chimichanga beckoned.


The reason to get a mole enchilada isn't the enchilada but the mole.  This was a wonderful mix of chocolate and heat.  I could have ordered a pitcher of the stuff and poured it all over everything.  The chili inside was made with veggies and tvp.

The chimichanga was smaller than I expected but I have big eyes.  In our society where big food is better food and the chimichanga is the size of my forearm and falling off a plate this was like a baby chimi.  Trust me, for a big eater there was enough food.  (Plus half a basket of chips of course).  The chimi was deep fried but had a slight doughy texture under the crunchy outer layer.  This didn't detract from the taste at all.  The inside was stuffed with roasted vegetables, perfectly seasoned.  Onions, peppers, mushrooms and what I thought was collards but might have been spinach.  David said much depends on what is fresh and in the kitchen at the time.

I wasn't thrilled that I was so close to NYC but due to job requirements couldn't drive home.  Then again I'd go back to this place in a heartbeat if I ever have to overnight in White Plains again.  Nice atmosphere, great food, friendly and knowledgable staff.  What else could you ask for in a restaurant. And they have tequila!
Posted by Marty at 4:36 PM

Small world! I used to work in Sleepy Hollow so T-Town was my stomping grounds. Love Santa Fe! In addition to great vegan food, great margaritas! Next time you're in WP, text! I'm about five miles from there!

I will definitely do that JL!