Lawton, Oklahoma.  Not a place that comes to mind when you say "vegan."  I certainly had fears of only being able to find potatoes baked in bacon fat or fried in duck grease.  And not in a haute-cuisine sort of way.
I packed a bunch of food stuff.  We were staying at Homewood Suites, a place with a stovetop, microwave, and full fridge/freezer.  I'm in heaven.

I go down to the little food store in the lobby just out of curiosity and lo and behold, there are 4 Simply Asian

options.  Just for sport I check the ingredients and 3 are VEGAN!!

The next day there was a "Grand Opening" ceremony officially commemorating the, well, grand opening even though the hotel has been open since March.  I point out to the General Manager that this excellent choice allowed not only those who ate meat to dine in their rooms but also vegetarians and vegans and commend him on his choices  This was Lawton surprise number one.  Oh, the Pad Thai was the only option which wasn't vegan.  I must say that the freeze dried noodles, seasoning packet and vegetables didn't look all that impressive when I put them in the included bowl and added water but they looked and tasted great after coming out of the microwave.  (I know I know, who wants microwaved food but if that's all there is ...)

There was a nice heat to the dishes.  (I didn't get to taste the Kung Pao as it made its way home and my daughter scarfed it down yesterday.  She loved it).

Meanwhile at the opening there was not one vegetable offered.  Not a dish with fiber.  Just meat and meat and more meat.  Oh, wait, there were a few onions and peppers on the shrimp skewers.  I tore af few pieces of fruit off of the Edible Arrangements ... uh ... arrangement.  Later I scored a crudite plate right from the supermarket, with some carrots, peppers, celery and tomatoes.  Of course some ranch dressing got splashed on some of the veggies but hey, you can't eat a vegetable without some fat on it, right?  I sorted through and ate the ranchless ones.

Come on people, seriously, do you all want to have brittle arteries by the time you're 45?  And eating like that?  What do you actually go to the crapper once a week?  I've seen some unhealthy things but this really gets first prize for having no regard for your body let alone the animals! 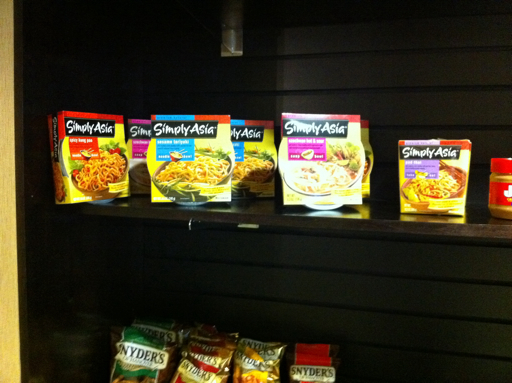 Lawton surprise number two was what I found when I arrived at the "health food store" that came up on Happy Cow.  Holy Happy (literally) Cow batman, look at this store.  It's 3 or 5 times as big as my local store here in NYC.  I was impressed just driving up to the place. 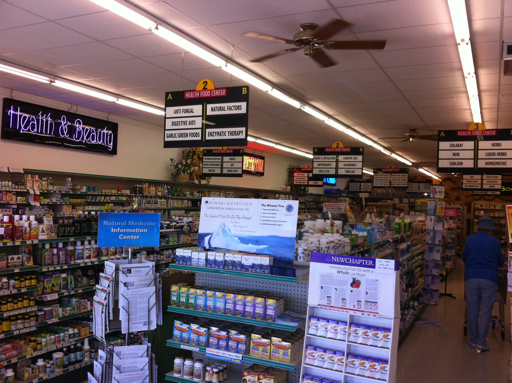 Inside is a vast array of vitamins, supplements, dry and canned goods.  This is an awesome, (and you know I don't use that word often), and pretty all encompassing store.
Now I really hope that I remember your name right but this is Sally.  She was the only vegan working in the store and extremely knowledgable about what she sold.  She's pretty friendly too and offered me the 10% Thursday discount.  Or was it the Senior discount.  Hey, I'm only 55!! 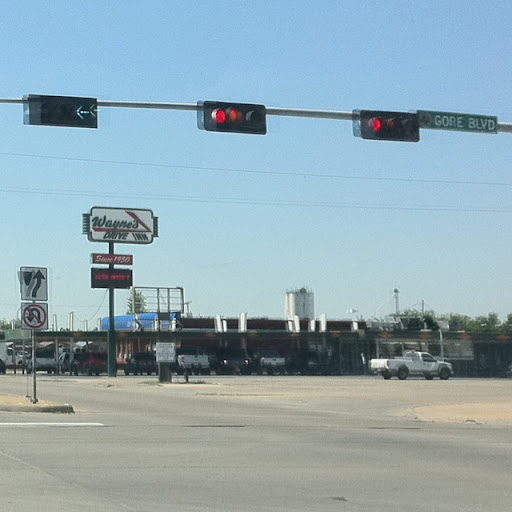 Now the sad part of my trip was that out back of the hotel was a sort of light industrial complex.   When I google mapped it this came up.  There is nothing humane going on behind these walls. 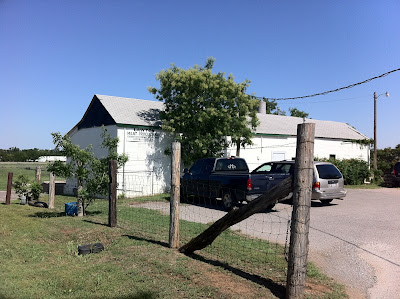 I looked out of my window and could see the place clearly.  Each day I looked out back for any signs of animals but never saw any.  I took a walk by the place and found only 55 gallon barrels filled with decaying, rotting, and putrifying animal parts.  I never went on the property but the smell was nauseating and wafted across the field.
This place really saddened me. 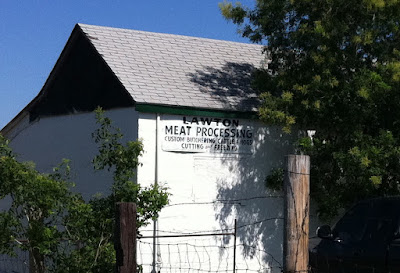 But on the other hand, apparently some of the residents of Lawton have a sense of humor.  This is the best billboard I have ever seen and had to do a triple take. 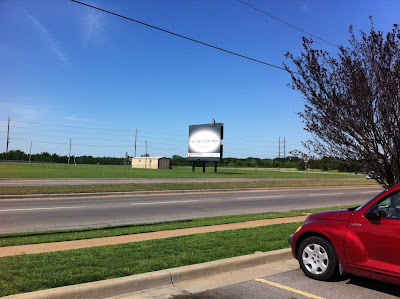 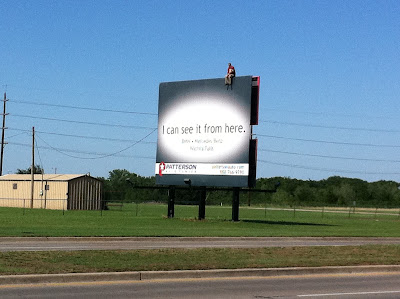 And on the way to the airport there are sculptures of beautiful animals of the plains.  Another animal that we've almost decimated.  But if you click on the picture and enlarge it and take a look at the babies you have to smile. 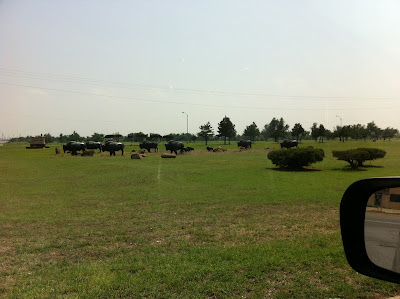 Unless it's 90 plus degrees outside and you're sweating like a ... hot pilot.  Then you're not smiling so much.  So I didn't go out to eat in Lawton.  Did I do a disservice to the vegan community?  No, there's a great healthfood store.  I relaxed.  Ate well although in my room mostly.  Discovered a new product.    And had a great trip home.
Posted by Marty at 9:10 AM