One of the vegan restaurants in Pensacola is closed on Sunday and the other, a cafe called By the End of Trail was closing in 20 minutes.  No way I could make it down there.  I called and a very helpful Trailender suggested Tu Do.  It wasn't vegan but they would prepare anything vegan and were very helpful he said. 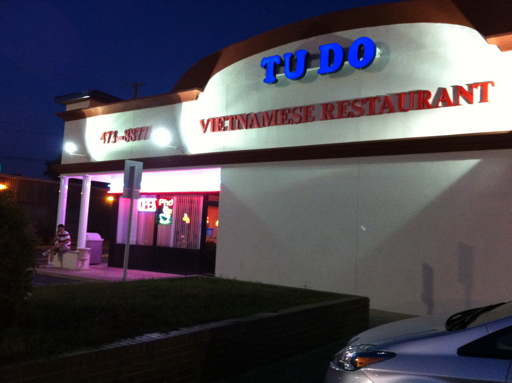 It's a very obvious building all lit up with a white facade. The driveway comes up quickly so be careful not to miss it.  It's not a big parking lot but a driveway TO a parking lot.
After I sat a young waiter asked if I'd like something to drink.  I asked about the beers and got the usual, Bud, Coors light, etc and then he laughed as he mispronounced Tsing Tsao beer and said, "Or something like that."  Hmmm, I don't expect seriousness but the vegan diner in a non vegan restaurant is already a bit wary of not being taken seriously where the food was concerned.  There are 3 beers on the menu and you didn't know how to pronounce one of them correctly?  Ah, lemme think on that a bit pal. 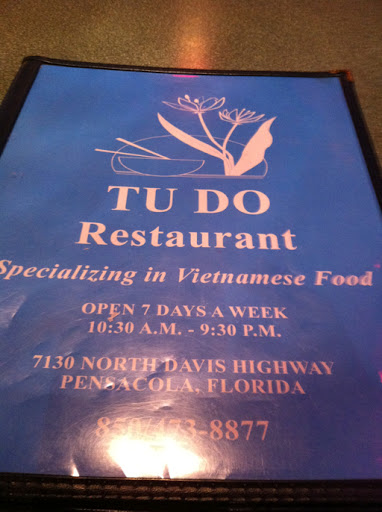 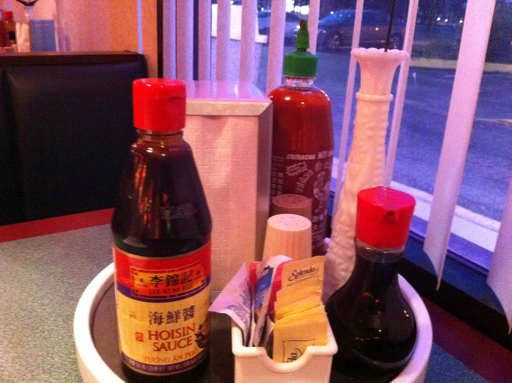 One of the things I look at is the assortment of condiments left on a table.  I love when I see Sriracha.  It's my ketchup.  But I recall hearing chef Ming Tsai say once that Hoisin sauce should always be heated.  Oh well, as another chef, Joseph Ciminera from "Taste This" says, "There are no rules in cooking."
Then a waitress came over and asked if I was ready.  I said I'm a vegan and she totally didn't understand what I was saying.  Now I'm worried and grab my iPhone, open it to Passport and load up the Vietnamese phrases.  I show here, she reads, smile, says, "Oh!" and flips the menu to the Vegetarian section. 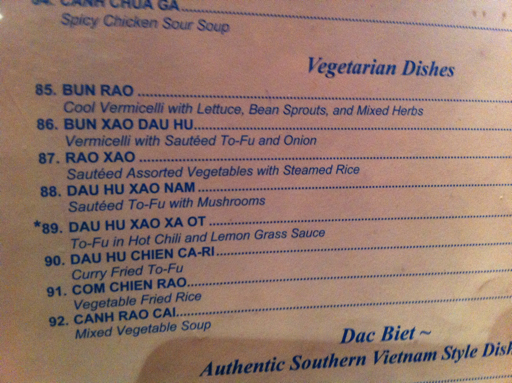 I don't eat in many Vietnamese restaurants as it's a totally foreign environment to me.  I am not all that familiar with that cuisine except for a bad experience when I was based in Dulles several years ago.  I ordered the Vegetarian Pho, a soup based dish and after eating the whole bowl found out it was ... wait for it ... chicken stock.  You can only ask if something is vegetable based so many times and hear a yes so many times before you say, "OK," and order it.
Anyway, here was a section (almost) just for me.  I asked about fish sauce and stock and got the same reassuring answers.  (After my meal I asked another server if it was made with no fish or other stock in my food and he said, "Yes!"  I said, "Yes, what!?"  "Yes, made with no fish or chicken stock, just soy sauce and spices."   Ahhhhh.) 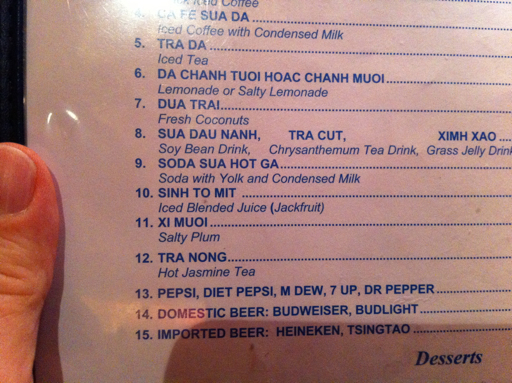 There were no appetizers without animals and I didn't feel like, (or feel like risking), soup.  I ordered 89, the only dish with a spicy "*" the Tofu in Hot Chili and Lemon Grass Sauce and since my only starch option was rice or vermicelli I ordered 86, the Vermicelli with Sauteed Tofu and Onion.  The entrees ranged from $4.95 60 $7.25 so I didn't think I could lose either way.  Dinner total with tax and tip was about $21 and I had half of what I ordered to take home.  Or take hotel. 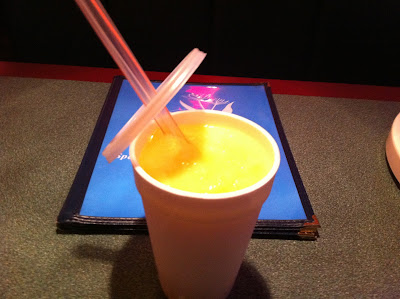 I was thinking of a bubble tea tapioca beverage but none of the flavors struck my fancy with bubbles.  The fruit
beverages were all made with milk.   When I asked my waitress said she'd have them make it without. When I asked.  So it's still a difficult connection for people to make when we say vegan, explain it, question it and then ask about another item, that our conditions still apply.  So if you ask for a fruit drink that is made with milk you'll get dairy.  I got the 10, Iced Blended Juice made with Jackfruit.  I wouldn't have any idea what a Jackfruit is if one fell on my head but it was a creamy delicious, sweet with a tinge of tart, frozen beverage.  I asked again about the milk and was reassured it had none.  Great.


This dish had a subtle mint and lemmony (from the lemongrass) flavor.  I think mint easily overpowers a dish but it could have had more.  It had a heat with a touch of sweetness.
The vermicelli dish was a flavorful tofu with a predominant red pepper heat in a peanut sauce. Salad pickled carrots and parsnips or yucca.

This entree came on a bed of lettuce and bean sprouts. 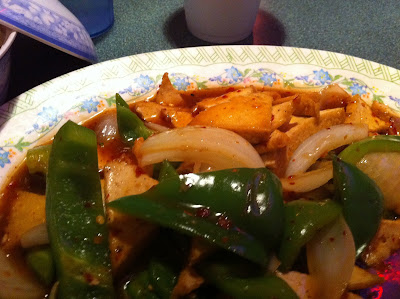 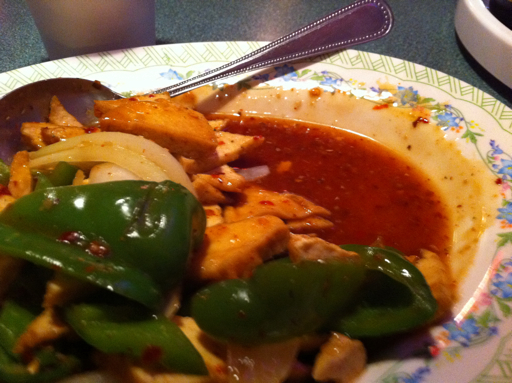 Very simple dish as well. Peppers onions and tofu. Really nice spice with a hint of bean base. Almost a sambal flavor. And the Essenes of lemongrass in the background

The steamed rice came with a peanut sauce which I was assured was just peanut paste and water.

All in all this was a pretty good meal.  I didn't ask for extra spice but for most I think it would have been a touch over the top where heat is concerned.  I think most people who are not capsaicin addicts should ask for it to be toned down a tad.  I took half of both entrees back to the hotel and they made a nice dinner the second night in New York.  If I couldn't make it to one of the vegan places, To Du offers a pretty good backup but I wouldn't attempt it without my iPhone's Veggie Passport.