Ah, you think the life of a pilot is all glamor and fun, laying on the beaches of exotic locations and of course, let's not forget the frolic!  So.  Much.  Frolic.
My schedule as a charter pilot is a bit more mundane.  If I'm not scheduled to fly and I'm not "OFF" I'm on standby.  I have to be ready to respond to a call from dispatch for an "ASAP" flight and report to the airport in 2 hours.  Most days I sit trembling in my living room with phone in hand.  Some days I venture a block or two.  On rare days I actually will venture forth to another neighborhood, (which in Manhattan means more than 5 blocks in any one direction).
This beautiful Sunday found me slinking underground on a subway ride to Moo Shoes, (Vegan Shoes and accessories), at 78 Orchard Street.  I wanted to partake in the Vegan Bake Sale to benefit for the Animals Sanctuary.  Surprisingly, this was only one of the three I had heard of, there being two on Saturday in Brooklyn and Morristown, NJ.  Not a very good showing for the progressive New York area I must say.  The Midwest put us to shame!  But here I am just happy to be a part of a vegan activity.
There were tables to the left of me, tables to the right and tables in front and in the back.  Here is Terri who volunteers at the sanctuary selling some of the amazing jewelry hand made by Debbie, the founder.
Now I have two "vegan" pieces hanging around my neck.  Thanks for the polish, Debbie. 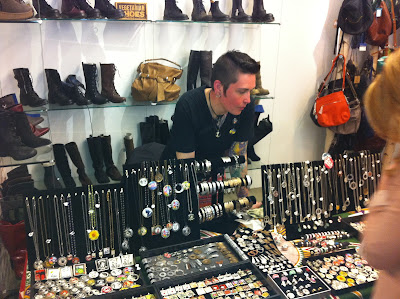 (OK fellow internet gurus.  Why is it when I save a picture to iPhoto and then modify it I can see the modified picture on iPhoto but when I go to add a picture on blogger it loads the unmodified picture.  I tried shutting down the blogger webpage on safari and restarted iPhoto.  Only a whole reboot seems to work.  Help.)
The people who organize vegan bake sales should rent space out a table to Diabetics Anonymous and Weight Watchers.  I swear I could have gone through 2000 calories of sugar in 10 minutes or less ... but I didn't.  I'm working on my resolve.  I did have a 5 Spice Cookie.  I love the thought of using a spice I used to use in my Shrimp Toast in a sweet vegan cookie.  I loved the mix of flavors and of course I found out later that Hanna, (see below), was the one who made it.  I also packed a box of stuff to take home and share with the family.  (See way below).
I have to admit that ever since my Vietnam War protest days I have been a closet button freak.  I used to wear them on my knapsacks and shirts all through high school.  So when I found baskets of buttons I short circuited. Bringing the self control aspect back I only bought TEN buttons.  OK, small buttons but still, that should send out a few messages whilst sitting on the subway. 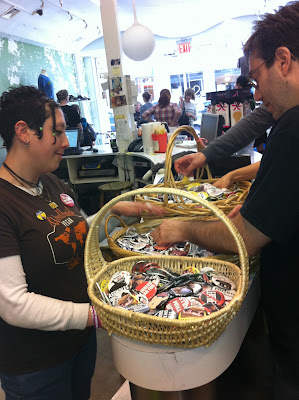 It was great to meet someone who I follow and Hanna is delightful.  I spend a good amount of time with her and her mom talking about baking, inspiration, life in general and they are 2 incredibly easy to talk to people.  I couldn't resist buying one of her books and although I try try try and stay away from sweets I have a feeling I'll be telling you about more than a few of her recipes.  Her website is mysweetvegan.com.
Here's my review of the treats that made it home unscathed.  The asparagus muffin was ... interesting.  I couldn't flip or flop on the savory or sweet.  As I cut the pear cupcake open with my daughter by my side she watched the filling ooze out and said, "Ewwww, pear glop."  Then we tasted it and she said, "Mmmmm, pear glop!"  I enjoyed this one as well both for it's flavor, (I like pears), and it's uniqueness.  The chocolate cupcakes were by far the bestest we tasted and had chocolate written all over them.  Perfect flavor and not too sweet.  The brownies unfortunately had a great moist consistency but I didn't care for the taste at all.  I think there might have been an omission of sugar in the recipe.

Strolling over to the J train I see the sign "BAKERY," and think, "Hey, that's Babycakes!!!"  I had heard some nice things about their second cookbook and figured I'd stop in to take a look.  Well, there's something seriously wrong with my shopping gene and I ended up buying that one too.  And while I was there I figured, "What the hell?" (which is a remark that has gotten me in more trouble in my life than we have time to recount), and decided that since I had a cookie earlier and a box of cupcakes and muffins in a bag by my side that that justified eating a doughnut!  Well, I haven't had a doughnut in so so long.  Of course the Coffee Cake was sold out as someone ordered the last one from before my very eyes but the "second best" was suggested as the Starburst.  I don't know if I could own a bakery.  Too hard to come up with so many names. 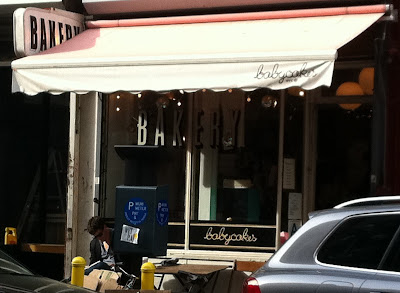 Babycakes had a constant stream of folks flowing onto the end of the line.  When you have a good product I guess the phrase is "... they will come."  And they do. 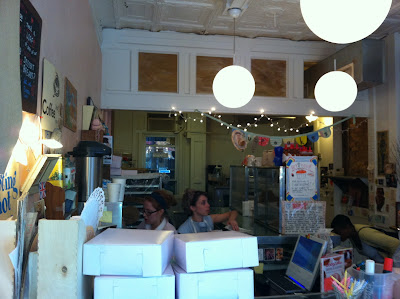 The doughnut was sweet and rich and the consistency was what I remember from the more dense "Old Fashioned."  I savored 2 bites and then the dopamine rush kicked in and I shoved the rest in my mouth with reckless abandon, enjoying a mouthful of memories.  A cupcake we can seem to find in many more places but a vegan doughnut, that is my new fav at Babycakes.

Aww, you got such a great photo of us- Not an easy thing to do! It was really nice talking with you too. Hopefully we can work out a meet up with other vegan bloggers some time soon. :)

I wish I had been in town! I'm a big Moo Shoes fan and I'm always up for a bake sale (and of course I love animal sanctuary's -- I sponsor a goat named Clover at the Woodstock Farm Animal Sanctuary).

Isn't Babycakes divine? I've had their cookies and donuts and loved them both. YUM.