One of the truly GREAT things about living in New York is that you have the best of the best at your doorstep.  OK, 5 blocks in any direction is what we New Yorkers call a different neighborhood and I do miss the convenience of getting in my car and driving from strip mall to strip mall and back to my suburban driveway but for now I live in the Big Apple and not an outlying orchard.  New York City is also home to some of the icons of the vegan fine dining world.  Blossom is a major player.
I want to say something about the physical space.  I think that before the tastes and smells and sights of the food hit your brain you get a "feel" for the place.  Cozy, warm, inviting are just not words I'd use to describe this spartan white walled space.  The high ceilings and exposed ductwork might be hip and trendy but to my non hip (anymore) and never trendy mind it creates a cavernous feeling.  I do absolutely love the Blossom on 9th Avenue because I do find that space, well, warm, cozy and inviting.  I'll tell you right now that this is the only negative thing I have to say about Cafe Blossom.
OK, one more thing.  Take a look at those barstools.  More than once I did the lean-back "WHOA! Holy ShnikeesImgoingoverbackwards" thing as I leaned back.  OK, really, the very last thing about the space.  Take a look at the bar in the middle.  You sort of face a wall.  I think that's just sort of weird. Anyway, we sat at the front bar where the people working were very warm, cozy, friendly and inviting.
OK, OK, but this is the very last thing I didn't like about the place and had we sat in the back it probably wouldn't have mattered but the juicer was incredibly loud.  I was watching juices being made, (kudos), and wondering what kind of plastic enclosure would deaden the noise and still allow a carrot or beet to be pushed down.  Couldn't imagine it.  Thank goodness it doesn't take that long to make a juice and that's not the thing that everyone seemed to order.  The "pfffft" of a beer cap flipping off is more music to my ears.

It is so nice just ordering a beer and not worrying about how fast barnivore.com is going to load on your phone.  Everything is organic and vegan.  Since leaning into more raw food I first ordered the Root Vegetable Phyllo pastry but they were out. 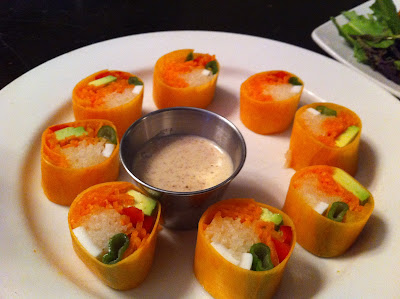 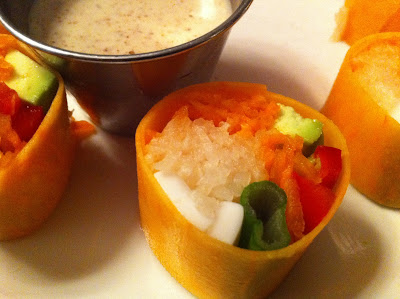 These were precision sliced by a laser device only found in NASA repair station Zeta12.  I was impressed with the exactness of the plate.  There were no folded over ends.  These looked like they were machined.  The texture of a raw roll is basically crunch and this was a softly crunchy bite.  I was also impressed that the whole thing didn't come tumbling apart when you ate it.  The ginger sauce was a nice addition although I didn't feel the need to dunk every piece as the flavor of the veggies held their own very nicely.

As we sipped and tried to maintain our balance on the semi-backed barstools the seitan came before us.  I firmly believe that seitan will save the world and part of why I was put on earth is to sample every individual recipe.  This is definitely near the top of the list.  It wasn't so much seitan chunks but strips of seitan folded over.  It had a nice toothy mouthfeel almost like the meat in my souvlakis (pre-veg of course).  It was tender and flavorful and this is proof positive that there is no need to put lamb in a pita.  Although this wasn't on a pita.  The slaw was crisp and bright and melded very nicely with the skewer.  I wish there was one more piece of seitan on each skewer. 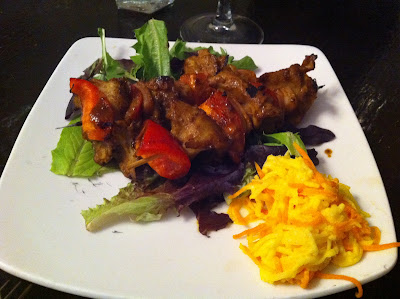 house-made bbq sauce, onions and peppers, jicama carrot coleslaw
And of course sitting and sipping and drinking some more and not knowing what the plans for dinner with our daughter and her friends were going to be we elected to continue down culinary lane with another dish.  We ordered the Southern Seitan Sandwich.  This seitan felt chunkier more akin to a deep fried softshell crab sandwich of old.  And once again, this proves that from a consistency standpoint there need never be another crab take from the ocean.  There was a wonderful crisp crunch and a meaty softness underneath.  The smaller pieces and narrower ends were more fried and crispier than the thick middle and offered a variety of fried textures.  The sandwich itself had a nice balanced flavor, neither the spice of the batter nor the rosemary of the bread nor the chipotle overpowering the meld.  The focaccia turned this into a hearty, "grab the whole thing so nothing falls out," kind of sandwich.  I needed my greens fix so substituted a side of kale for the fries.  The greens were perfectly wilted and seasoned. 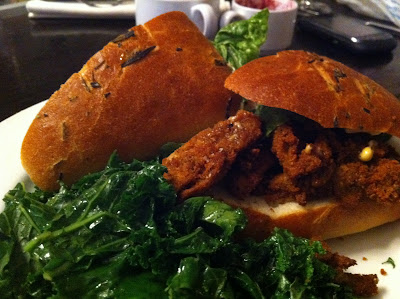 Now with the adult beverages finished and no place else to go and no particular time to be there by and not quite ready to leave, (being an on call charter pilot has really re-defined what a day off means), we opted to continue consuming and went for the chocolate cake.
We've had vegan chocolate cake that was good and some that was pretty good.  A lot of cakes have caused the, "wow, this is vegan?" question to be blurted out but this cake was made in house and was outstanding.  I haven't had a cream filling that came this close in flavor and consistency to the buttercream of yore.  It had a true softness of butter yet firmness of cold butter.  The cake was moist and chocolatey and the frosting was, you know it's coming, chocolatey too.  This alone is worth stopping by Blossom. 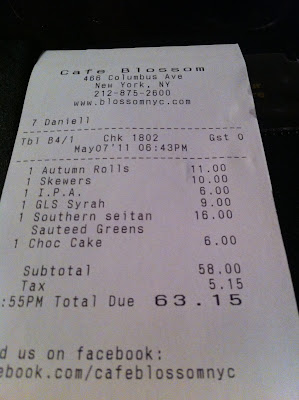 It's Manhattan and the bill didn't come as any shock.  It was almost funny that we stopped in to grab a quick day off drink and ended up with almost a meal each.

Blossom also has outside seating for those of you who prefer al fresco.  Count Blossom as a place to stop by if you find yourself on the Upper West Side and start jonesing for some outstanding vegan comfort food.
Posted by Marty at 11:08 AM

I love this place. I fact, I was there twice this week, once for lunch and once for dessert.

Great review, Marty. I can't believe I haven't eaten at Cafe Blossom, yet!

JL, thanks. All good things to those who wait. Perhaps friday lunch?

Jason, tell me that dessert isn't worth the trip.

I am so glad I stumbled upon your blog (while looking for reviews of Gobble Green). I live in Seattle now (since 2004), but I'm a New York City girl who goes back to visit family/friends periodically in NYC/Long Island/northern NJ. My upcoming trip is my first since embracing veganism, and I've been wondering where on earth to eat - so thanks for all the help!