I really get excited when I think about eating at Millennium.  It is hands down one of the best restaurants I have ever eaten at.  Period.  I don't really go to review the food but to enjoy a DINING experience.

Hey, New York.  Get with the program.  You stick your credit card in the meter and take care of business.  You don't have to wait for a machine to issue you a piece of paper after waiting on a line and then stick it on your dashboard.  In West Palm Beach, FL you can bill a parking meter charge to your cellphone! 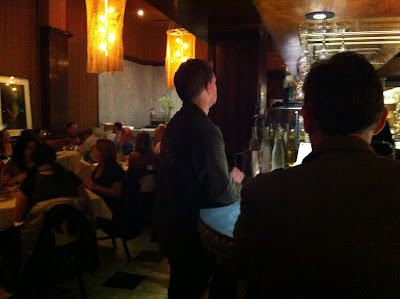 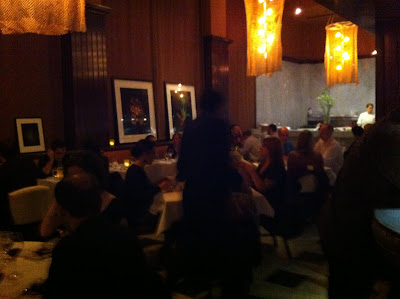 I got myself a beer and went into the lobby of the California Hotel to relax, enjoy the beer and peruse the cookbook.


The Bison IPA was a nicely bitter beer.  I did find that without any food my palate craved something a bit milder.


After about 20 minutes I was called and sat at the bar, in a seat I had occupied several times before.  Alice took good care of me. 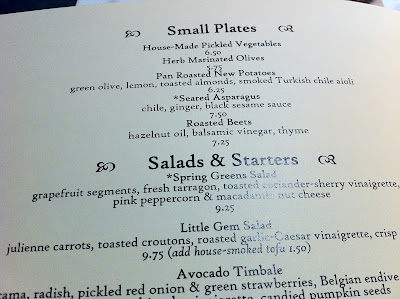 The website said there was going to be a dish made with a stuffed phyllo dough purse.  "The Artful Vegan," was the first real cookbook I ever bought.  The first recipe I chose to make was simply called, "White Bean-Filled Phyllo Purse over Soft Garlic Polenta with Porcini-Zinfandel Sauce, Broccoli Rabe and Grilled Pear."  I can't even say it without taking a breath.  I didn't know it at the time but it's the sort of recipe you shouldn't really attempt if you don't even know how to properly hold a kitchen knife.  (I didn't).  It's the sort of recipe that includes ingredients that have their own recipes 100 pages later in the "Basics" section.  (Did I really need to make my own roasted vegetable stock?  Make my own Spicy Fennel Seitan Sausage?)  The recipe took me 8 hours.  (The second time I made it it only took 4!)  Ever since I have wanted to try the Millennium version.  I was excited that this was on the menu tonight.  But it wasn't when I got there.

The other thing that wasn't available was the bread and spread.  They ran out.  (sigh). 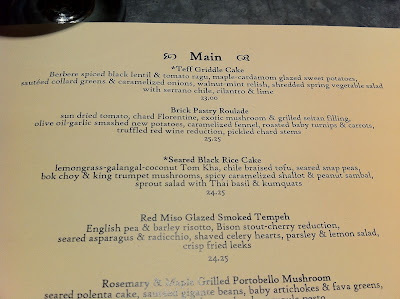 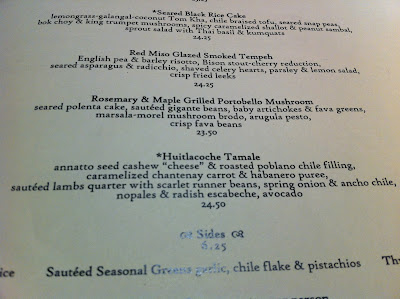 The mushrooms aren't a rendition of fried calamari, (go to Sublime in Ft. Lauderdale for those), but a delicious offering of what can be done with a mushroom.  The first taste is a sweet crunchiness followed by the meaty chew of the mushroom.  I didn't get a big hit of thyme.
The jam has a distinct sour/bitter note to it.  I thought it was fighting the sweetness and winning.  Grapefruit was an interesting choice, certainly one I'd never come up with and made an interesting dip.  I'm not sure I'd pick it given a choice but glad to have the experience of tasting it.  There was no heat in the jam from the habanero that I could tell but the mushrooms really need nothing else to put them on their own pedestal.

The radish salad with ginger aioli was a sweet pickled side that to me was the perfect compliment to the mushrooms.

It's sort of funny the way we remember things.  When the server put the entree down, (dishes are brought to the seating side of the bar and placed on the bar from behind you by a server, not the bartender), one of the rolls, well, rolled across the plate.  So now I remember the exact same thing happened the last time I was here and ordered the dish.  Now I think of that lone mushroom sitting in my grapefruit jam and it occurs to me that the expression, "First we eat with our eyes," is so true.  When you put something down in front of someone and pieces are jumbled up or things roll from where the chefs put them it changes what they strive to create.  It's a small thing but it's an important thing.  Especially when you're paying $25 for your entree.

This dish was amazing despite a few shortcomings.  Plating doesn't influence taste so lets put that aside.  The only real "fault" with the dish was the dough wrapping was inconsistent.  Some of it was flakey, some soggy and some overcooked, on the bottom, just tough.

Now lets move to the tastes.  First, I want to say that as good a home cook as I am, (and I'm not bad),  I am truly indebted to the likes of Eric Tucker for their ability as artists, to imagine and execute the flavor profiles they offer.  I can't imagine like they can.  I can't make it happen like they can.  And they can.

This dish is truly a carnival of flavors and textures in your mouth.  There is density of a wrapped food, individual tastes of rich earthy mushrooms, sun dried tomatoes, the chewy feel of meaty savory seitan, lightness of chard and ease of bite of mushrooms.  That's what you get in bite one of the roulade.

The pickled chard stems were about a tablespoon of interesting flavored tough stems.  I think this was sort of an experiment.  Interesting but not something I'd list as a side dish on the menu.

The vegetable side was perfectly cooked with just enough crunch left and the potatoes were pretty standard, mashed with a hint of garlic. 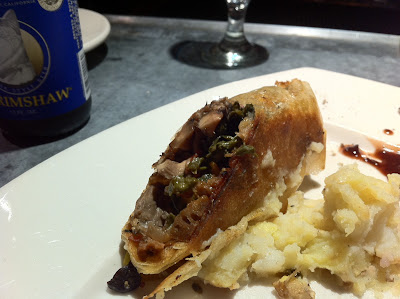 To me there are two things that comprise an end of the meal.  Well, three if you count eating all of your food.  The other two things are chocolate and a cup of coffee.  (How nice to know I get Silk Soy Creamer and don't even have to ask!)  The coffee was strong and smooth and when the Chocolate Almond
The devil must have a hand in making something so decadent.  This is not decadent for a vegan dessert, this is just decadent culinary heaven.
I didn't get much of the cashew in the crust, it's a chocolatey chocolate although texturally they are there. I ate this in layers, savoring each flavor and in forkfuls of everything all mixed together.  This dish could be served as it's individual components, a chocolaty cookie crust, either the rich mocha filling or white chocolate mousse should have their own line of "puddin' pops" but all together with a dip of the sweet/tart raspberry sauce was the perfect explosion of decadent sweetness, richness of chocolaty-ness to end a meal.

So the meal as a whole was pretty good.  Not excellently outstanding although there were pockets of that but better than most you can get anywhere else.  The sheer thoughtfulness of the flavor profiles amazes me every time.  Some taste combinations rocked my palate and the three dishes of my meal each had their highlights.

Now all that being said I had lunch with a Jenn from LGWB, a SF Blogger the next day and found out that Jason, the sous chef at Millennium had passed away less than a week ago.  I was shocked and so sorry to hear that.  I received this today via email:

I can't imagine working like the Millennium staff did, with a vacuum where Jason stood.  In light of this my meal was a great meal.  There is no sense to focusing on the few trifling imperfections.  It was outstanding.  RIP Jason.