Turks and Caicos is a beautiful island in the Caribbean.  (Actually more than one but if you're interested there's always Google Maps.) 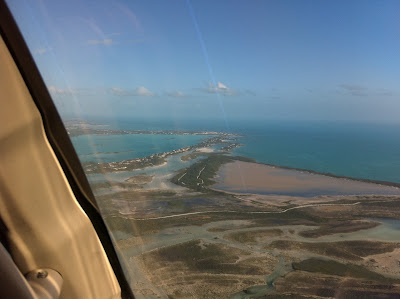 There are NO vegan restaurants on Turks and Caicos.  Nothing on Happy Cow.  Nothing on Google.
There is a place that comes up on a search called Gecko Grill which advertises vegetarian fare in addition to their regular menu but no one seems to know of it.

The hotel I'm staying at is the Caribbean Paradise Inn.  It's not on the water and although I am working I must say that if you're coming all this way, (my last visit was a family get together almost 3 years ago and we stayed in Beaches), you might as well buck up the few extra dollars and enjoy the waterside lodging.

I know, I know, you're all surrounded by the cold and I'm complaining about being in the Caribbean.  The hotel facade is under construction and with the storm shutters pulled down this is what it looks like at night.  The restaurant is just to the right.
I finally gave up my search.  Not finding anything remotely vegan and with the front desk saying the restaurant closed in an hour plus the fact I had no car compelled me to just walk next door. 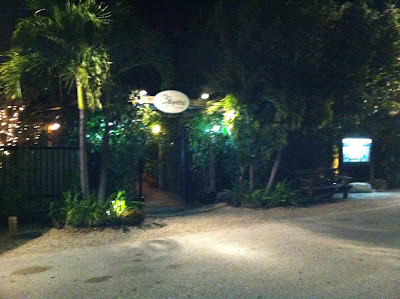 I asked about a table.  It was 8 pm and was told the best I could hope for was 915.  So I went to the bar and had a beer, listened to some podcasts and at 910 was shown to a table.

My order was taken by a very knowledgable hostess.  I'm not sure what you call her but she seemed to be the greeter, question answerer and order taker.  She also was the checker of how things were going.
When I said I was a vegan it wasn't the most enthusiastic response but she powered through it and dove in.  There was a mushroom stuffed ravioli in a tomato sauce with tossed arugala that I thought might have had my name on it but no, that wasn't vegan.  She initially suggested a few sides but I asked her to see what the chefs might be able to whip up.  I was given the all too familiar, "People with special dietary needs usually give us a little notice."  (Hmm, up for a challenge?  I don't get much notice in my job regarding where I'm going or when, btw, and we still found the island.)

A plate of carrots, celery, and pita was placed before me.  I queried the waitress and she told me the dip in the middle was coconut milk mixed with cream cheese.  So close but yet so far.

I did start with 2 sides as my appetizer, the sauteed spinach and the truffle fries with mango ketchup.

The sides weren't the highlight of the meal although they did have some high points.  The spinach was more steamed than sauteed and was pretty much just a mold of bland over-cooked spinach.  The onion rings on top added a nice flavor and texture contrast but I asked for salt and pepper to season the spinach after the ORs were gone.  They had a smokey component which was almost a pleasant burnt flavor.  Not a charred flavor but more a very smokey one.

The fries did have a nice truffle hint but I found they were inconsistent.  Some had a waft, others were intoxicatingly intense.  The ketchup might have had a hint of mango but just might.  The fries were actually mostly cooked with about half having a nice crunch.  (I used to pick the really really crispy ones out for my mom and to this day think fries in the US are basically undercooked mush.  To me a french fry has to be ... well ... fried.  To a crunch.)


Of course the intermezzo had a creamy coconut flavor and when I asked one of the bus boys if it had milk he said yes.  I was later told it didn't and was just coconut milk for the lactose intolerant guests.
So far the meal was just ok and anything but stellar.
The entree blew me away.  It was three perfectly cooked artichoke hearts sitting in a pesto.  When I asked yet another question of one of the passing waitresses, (Is there parmigiana cheese in the pesto?), the next thing I see when I look up is Chef Martin who with an English accent told me all the ingredients in the dish.  That's how I know there's not parmigiana cheese in the pesto).
First bite is of a corn, beet, (I don't think they were pumpkin but some kind of roasted seed), arugula salad with cilantro and a surprise hit of Sriracha.  The fried plantain had a nice crunch and then the deep tomato, onion and carrot ratatouille which filled the heart.  The pesto on the bottom just rounded out an amazing burst of flavor.  This was one of the best cooked vegetable dishes I've ever had in a mainstream restaurant.
I knew the prices were sky high when I perused the menu.  This was way over the top expensive but sometimes, when you're on the road you just don't have a choice, especially in resort locations.  But hey, I can only be a working stiff for so many meals in a row.

Email ThisBlogThis!Share to TwitterShare to FacebookShare to Pinterest
Labels: vegan meal in turks and caicos

Love this post! Don't you love those surprises of excellence? Not sure if you had a chance to read my Barbados experience but it was wonderful because I sat down with the chef on the first day and he was super-clear what I could eat. He later told me he enjoyed "the challenge." :)

Oh yeah, those are the things I love to tell other people about. I convey the trials and tribulations but really, this isn't about whining, it's about celebrating. I have to put that Barbados post on the top of the list. Between working almost every day and a few hundred blog entries I have to read and a few more I still have to write, (Jackson, MS and here I am back on Turks with another good meal), I just am falling more and more behind.

haha they must've been racking their heads when you walked in the door!

I'm a vegetarian and I doubt I'll ever go to most the restaurants you write about, but really, your post was so funny and interesting--I just found your blog so I'm bookmarking it and I hope you continue posting!

Thanks for stopping by Gloria. I have about 5 reviews to write so I do hope you stop by often. Remember, this is a comedy so I do have a strict 2 drink minimum.

Just wondering, what did you search to get here? Keywords?

Alawya a pleasure to cook for vegans chef martin coyaba!