Jackson, Mississippi.  Not exactly the mecca for vegan fare but I had eaten at the coop years ago, (I never forgot that I didn't get the recipe for the beet burger as promised),  so when Cool Al's popped up with a few variations of a vegan burger I was all for it.
It's a couple of blocks from the highway on a not too well lit street.  There were lots of empty tables so I really wasn't sure if it was open or not but the people inside sort of clarified that. 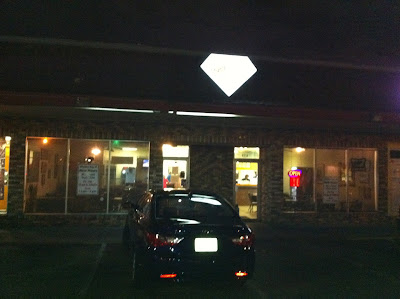 Inside it looks like your typical burger joint.  The area to the left looks like it was used for something in a past life and there's sort of a little bar area and to the right is the counter where you order.  Walking up to the counter I noticed my sneakers sort of sticking to the floor.  I mean, they came up with each step but there was a definite, "thuuuuuuwp," each time I picked a foot up.  Must have been a heck of a beer spilling lunch party. 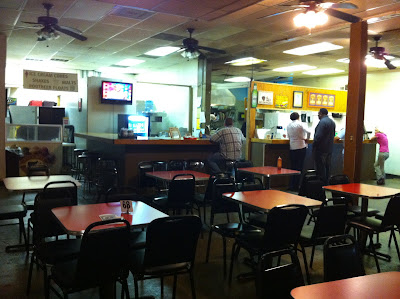 I ordered 2 burgers, not because I was so hungry but I wanted to sample as much as I could and the prices were pretty reasonable.   About $5 per sandwich, $2.75 for a beer and $5.00 for the onion rings.
The chicken sandwich looked like it was a Boca Chicken Patty although it might have been another brand.  It came with lettuce and tomato and vegan mayo.  The roll was soft and sweet, (I asked, they said it was vegan), and the whole combination just reminded me of those days of old when I ate fast food.  This isn't health food or even healthy food, although it might be healthIER food but it was so so satisfying in some bizarre way. 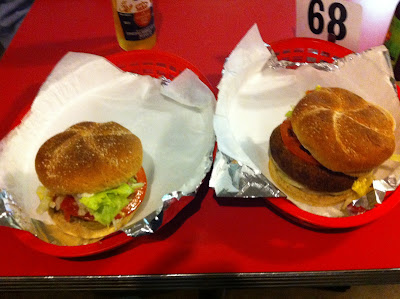 As I've said before, I don't think everything in a restaurant needs to be made inhouse from scratch and I appreciated the texture and taste of the chickn sandwich.

The burger to the right is a West African burger.  I thought the flavors were on the subtle side but there was a nice sear on the outside.  When I eat a veggie burger one of the things I look for is an undefined ratio of bread, (bun), to texture.  I know this isn't making much sense but when you bite into the bun it shouldn't squeeze the burger out the opposite side.  This burger met with about a 50% shmoosh ratio.  It was a black eyed pea based burger.  I'd only eaten those in a vegan Hoppin' John I made once and really didn't find any distinctive taste in the burger.  The texture was excellent on the outside, nice crunch, and a tad soft on the inside but the bun was soft so it sort of worked.  (If the bun is too hard or too crusty it's just going to squeeze the burger out like it was a piping bag).  What I really wanted to try was the Jamaican Jerk burger but they were out.
The onion rings were beer battered using a vegan batter.  They had a slightly burnt flavor.  They weren't burnt and I'm not saying burnt in a bad way but like a strong hickory smokey flavor. 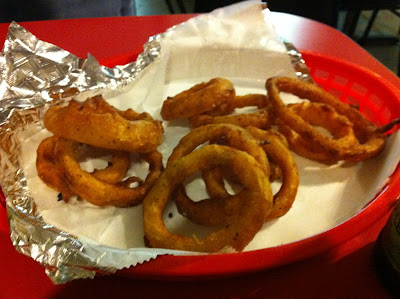 My buddy had a standard burger with the yam fries.  I think any kind of potato that is deep fried is great once it passes a pretty low barre.  (Can't be mushy, oil laden or flavorless).  These sweet potato fries, according to him were great.  I thought they were pretty good, but fries hold a subordinate position in any meal if there are onion rings to be had. 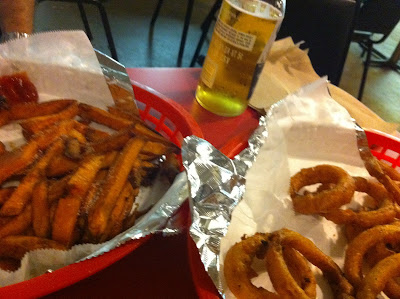 The place doesn't get many points in esthetics but the food was decent enough and the people there were helpful and indulged my questions.  There are all kinds of online comments about the wait but we were there when it was less than busy and waited about 5 minutes for the first order to hit the table.
I especially want to try the burger I missed.  With few vegan options available I'd give Cool Al's a second go around.  I give credit to any burger joint for putting up vegan options but and I know there were awards all over the walls for Jackson's best veggie burger but I thought what I ate was not really, "knock your socks off," fare.
Posted by Marty at 8:50 PM

haha, I know exactly what you mean about the bun ratio... there's just a slightly undefinable perfect "burger-ness" to a really good burger, where all the elements fit together just right and make you say "now THAT is what a burger is supposed to be!". and it's more than just the taste (because even the best-tasting burgers can get that ratio wrong, etc!)

I was excited when I saw this post! We went to Cool Al's on our trip up from Texas. I had their jerk burger and it was definitely one of the most unique veggie burgers Ive had.

Oh no Eric. Now I am actually hoping for an overnight in Jackson, Mississippi just so I can try that jerk vegan burger. I just hope they're not out of it again!

Haha, the burger itself was served a bit colder than room temp, which threw me really off. Id never had anything like it but remember really liking it. the texture was quite different as well. I couldn’t find your email but shoot me a line at hellopablog@gmail.com about when your heading this way.