Vegan Soups in Manhattan, Zabars and Hale and Hearty

One recent frigid day I was leaving school with my daughter and her friend and they wanted a snack.  We ended up at Zabar's Cafe on the corner of 80th and Broadway.  They ordered their stuff and just for giggles I asked the counterperson if any of the soups were vegan.  She said the vegetable and clam chowder.
Sometimes I don't know how I restrain myself but I looked around and sure enough, there was absolutely no soapbox to stand on.  I asked her if she knew what I meant and in about 2 seconds I could see the frustration, (or was it fear), on her face.  She spun around and spun back and she handed me the INGREDIENT list for all of the soups listed.  I think there were 8 but only the Vegetable was vegan.  Every other soup had a chicken or beef stock.
So just because this exercise had been so amusing I thought, "What the hell?  In for a penny, in for a pound," and ordered it.  It comes with a piece of bread and I asked which ones were not made with milk or eggs and I was given a small whole grain baguette. 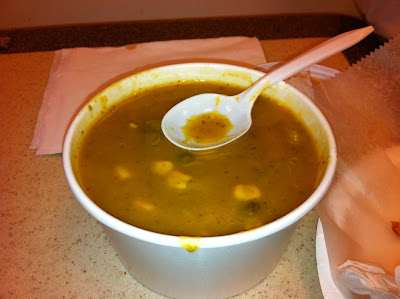 The soup was absolutely amazing.  It was creamy to the point that I had to go back and ask to see the ingredient list again.  And took a picture of it because who'd believe me?
Nice way to warm up on a cold day.  My hat is off to Zabar's for providing an ingredient list like this.  I wish every place would be so informative and forthcoming.  What?  We're out to steal their recipes?
I had a few hours to kill the other day, also on the UWS, and thought I'd pick up some more stuff at Zabars and head over for some more soup.  I bought 2 small multigrain pieces of bread that were vegan according to the counterperson in the bread section of the store.  I also picked up some Macrobiotic Vegan dumplings and vegan turkey-ish stuff.  (This is the same stuff that 7-11 is selling and you can get at almost every health food store in NYC.)
I walk over to the corner and look at Zabars menu.  I saw one or two hopefuls, but no, every soup had an animal or animal stock in it.  Shame on you Zabar's.  And my hopes were so high.  Off I went, across the street to see what Hale and Hearty had to offer.  And they blew me away!
Hale and Hearty has 3 designations on their menu board and has about 15 options to choose from.  I didn't look at the sandwiches so don't know if there is a vegan option there but each item has 3 circles.  Either they are blank or have an individual letter, (V, D, orL), or two or three of them.  The V means the item is vegetarian, the D means Dairy Free, and the L means Low Fat.  I saw some D items with meat and some L items with meat and some V items with dairy but there were FIVE items with VD and L all filled in.  I wasn't married to finding a vegan L but hey, while I was there, why not save a few calories.
I ordered a Mushroom Fagioli.  (Fazool).  Like Pasta Fagioli but no meat chicken, etc.  I didn't find the taste as good as the vegetable soup from Zabar's but it was still very flavorful.  Not to mention there is a familiar calm that comes over me when knowing beyond a shadow of a doubt that there was no sneaky animal products in my food.  I asked if the bread was vegan and got an unequivocal, "No."  How about the soup crackers?  They were vegan so I tossed a few into the soup but realized I like the idea of my multigrain Zabar's bread better and dunked with that.  New York is a dunking kind of town.  (Some day you can read about our practice of dunking bagels in coffee if you'd like.)
Then because I am always reading, (my nook and a book were also out on the table), I look at the receipt.  I see the price is different, (duh, I do usually check!) and remind myself to go to the register on my way out and see if I can rectify the discrepancy, (I did, they were gracious, apologized and gave me my $1.08 back).  After I notice the price difference I look and see the item is TURKEY soup.  My heart stopped for a giga-second but I watched the soup ladled out of the kettle labeled Mushroom Fagioli.  I could see all of the mushrooms and there was no evidence of turkey bits or flavor.  It was just that the cashier pushed the wrong button.  Still, it will be nice to not have a hiccup at every other meal.
My hat is off to Hale and Hearty for making it so easy for us to order.  I will definitely be stopping by both Zabars and Hale and Hearty much more often now that I know there are (sometimes) and (always) vegan options.
Posted by Marty at 10:25 AM

Great reviews, Marty. Soup is a nice and easy option on the run so I appreciate you giving me a head's up on two locations I can grab a vegan bowl!

It's not just that they existed and were tasty that I liked but that they were so easy to identify as vegan.

I'll have to check Fairway. I know Zabar's has a few more locations but don't thing any other Zabar's Cafes. Their soups in the stores are very well marked. I know. I went through a bunch that had the first ingredient listed as chicken stock. Argh. [sigh]