Lemon Cafe, Vegan creativity on Turks and Caicos with a Mediterranean Flair.

With many of the restaurants offering only a gratuitous pasta in marinara sauce, pasta primavera or pasta putanesca, and the other pilot not having an preference at all, the Lemon Cafe was a no brainer.

I didn't take any pics of the restaurant, probably because I was so hyped up from having just cheated death whilst driving on the wrong side of the road.  There are two sections, one outside and the other indoors, although indoors in the caribbean is not exactly accurate as all the windows are, well, non existent and it's really al fresco but not under the stars.  I actually went back the next day and took a few pictures.


I spoke briefly to the hostess about my vegan desires and at one point she asked if I could have chicken so there was a slight disconnect there although she was gracious and very nice.

John, the manager/chef, was next in line and very helpful.  He slipped once and mentioned, (well, he mentioned that he mentally slipped and was going to mention, but then told me the thought so actually ended up in reality mentioning), some filet.  I'm not the squeamish kind of vegan who flips out at the mention of something 97% of the world eats without thinking but probably could have done without the reminder.  We're reminded of it anytime the person we're with isn't vegan and orders some animal.

The soup on the menu was ginger coconut but the soup that day, John said, was actually a mushroom and squash soup.  Both were vegan and I went for one actually being served that night.  The appetizer was an antipasto, redone by John to eliminate the non vegan options and include something not even on the menu yet, which was enough for 2.  (We're both decent sized guys with pretty good appetites.  It was nice to share but I'm guessing we each could have finished one of these). 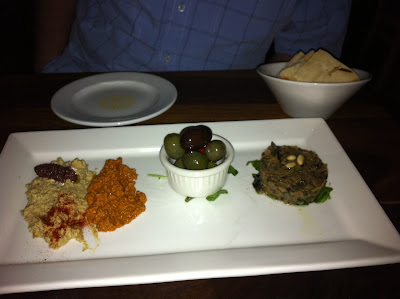 The plate consisted of hummus topped with an olive tapenade, a red pepper, walnut and pomegranate mixture, (the one not on the menu), a small ramekin of olives and babaganoush.  Put that new item on the menu John, it belongs there, no need to have something with Feta cheese if you can offer this tasty vegan option.  I asked for more bread and this is a little peeve of mine but a) wasn't told and b) was charged $1.50 for 1 cut up pita.  My personal opinion is that either you should charge for every single thing in a meal, (Oh, you wanted a spoon with your soup?  There's an additional 25 cent charge for that.  That can get ridiculous ... oh, did you want a bowl with your soup...?), or just add a buck to everything on the menu and eliminate the nickel and dime-ing).

The soup of course came first and that was a very nice combination of earthy mushrooms and creamy squash and had just a hint of heat.

For my entree the chef came up with a mushroom risotto.  John said initially it was made with a vegetable stock as were many of his dishes but by eliminating the cheese the dish might loose much of its creaminess.  (It didn't).  Actually, risotto gets it's creaminess from slowly cooking the starch out of the rice and continually adding stock.  I can't remember the last time I had risotto but this was an all around success.  The rice was cooked to a perfect consistency and the stock combined with the starch from the rice to come together in a perfect "creamy" sauce.  It was combined with some grape tomatoes, (I think grape), roasted red peppers, and wild mushrooms. 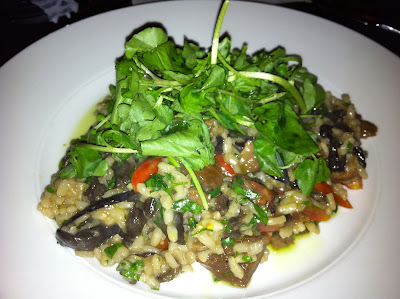 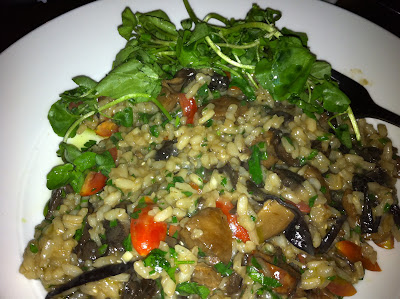 I suggested John actually advertise and focus on a few vegan dishes since there was no real vegan option easily found on the island.  Every place will omit the meat, (wow, again, see my rant about merely eliminating meats from dishes and calling them vegetarian), if you talk to the waitstaff/hostess but you still have to play the 20 questions about hidden ingredients.  We have the potential to actually create a vegan inspired dish or two at a restaurant on Turks and Caicos.

We're breaking through the wall.  My hat is off to John and I'd go back to the Lemon Cafe in a heartbeat.

Just one negative comment.  It's too dark.  Since 9/11 I have never left my house without a pocket flashlight of some sort and I, (and another group of diners my age ... no wait, I think they were younger.   Yeah, that's it, they were kids.  It's not our old eyes at all, is it?), might never have seen the menu without it.  It's also hard to see exactly what you're eating so just a tad more light and a tad less mood would be my only suggestion.
Posted by Marty at 7:18 AM

What a nice surprise for you to have received such a great meal, despite the initial mis-starts!

Turks and Caicos seems to have attracted a bunch of good chefs, 2 of whom stepped up to my vegan request, (challenge?), and I had two really really good dinners. Even my diner dinner, which I haven't posted yet, was more than decent so it really was a nice surprise. Thanks Abby.