First of all, the search for a vegan place came about because my kid and niece wanted, in the worst way, to eat at Max Brenner's Bald Chocolate Man.  I do a search on VegOut, my iPhone go to app and lo and behold, there's a place at the SAME address.  What?

So our waiter says, yeah, great place, he used to work there and when they closed for renovations a few years ago got the job at Max's and never went back.  So I read a review on HappyCow and I discover that someone had a hard time finding it because unless you know it's there YOU HAVE NO IDEA!!

You're in a yoga studio but keep poking around and you'll find this small eclectic place.

I really don't like a sprouts and raw veggies on a pita kind of place but the menu had seitan, which they make themselves ... Rosemary Seitan actually and if I remember a tempeh dish or two.  So I ordered the burrito, I think it was called the Diablo Burrito, because we were walking and I thought it would be convenient.  (But I forgot to ask for it to go.)

The burrito was in a whole wheat wrap, had lettuce, tomato, avocado, black beans and of course, the seitan.  The salad of mixed greens had a mustard dressing.

The burrito had a curryish flavor and wasn't too spicy at all but in all fairness, I did eat it about 2 hours later on a stoop on Rivington Street.  The piece of seitan I ate before they put it in my 'to go ' container was delicious and had a great mouthiness to it.

For $19 it was a pretty pricy burrito but seitan isn't being served on every street corner yet and we still have to pay a premium for specialty prepared vegan dishes.

That being said the real negative, to me, was that when I asked to have the meal 'to go' they charged me $0.75.  As you know, I hate nickel and dime stuff and at $19 for the burrito, plus a buck for a tip, that is just nonsense.

This is definitely a place to eat at if you're in the union square area.  It's peaceful, quiet, and serene.  My 11 year old said, "What a zen place."

Curley's is 4 long blocks away and Zen Palate I heard was reopened on Union Square East so you do have choices.  We'll definitely do this place again.

Now, as far as Max Brenner and the Bald Man Chocolatier, what I got was a basic Dr. Praegars veggie burger, vegan, no bun or dressing and a side of fries.  I later found out that the fries were cooked in the same oil as all the other proteins but live and learn.  What I do want to give a thumbs up to is the way it was presented.  I made me feel, for the first time getting a veggie patty in a restaurant, that some care was put into the plate. Here: 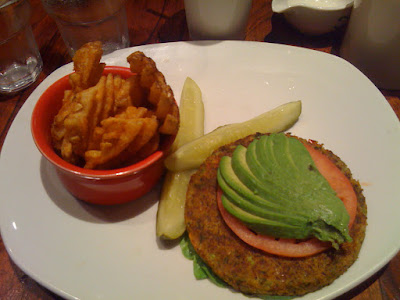 So thank you Max Brenner for at least putting this on the menu for me.  Now if you can up the vegan choice and please please a vegan chocolate for us too!

All that being said, the kids had fun! 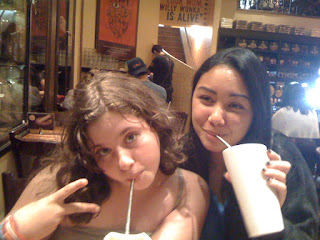