Wandering around the Lower East Side I found nothing that struck my palate until I saw the menu of the Noodle Bar, serendipitously, as I walked by collecting menus and taking a pondering life walking stroll. 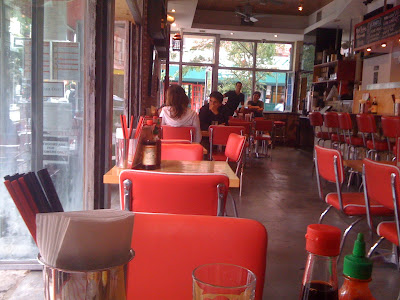 Sau Bien (Pressed Sandwiches)
Wanchai Veggie / crispy tempeh, spicy eggplant, balsamic portobello, sriracha aioli 6.5
Now this looked interesting and different.  I asked if it was vegan and trading the aioli, (a mayo based spread) for just a squirt or two from the Sriracha bottle, (one on every table along with napkins and chop sticks and soy sauce), was the first step.  I wasn't worried about losing the fat and keeping the flavor.
Next was the bread.  I was told it was white bread but didn't think that white bread was necessarily made with eggs or milk.  Well, I don't make it that way.  It turned out to be a ciabatta so I was sort of thinking it was a wheat/yeast bread and I was pretty safe. 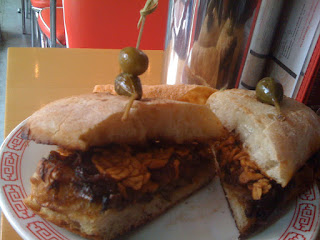 The sandwich was surprisingly delicious.  The caperberries started out with a briny hit but that was just a first bite garnish.  The crispy fresh and toasted, (in oil), bread had a great crunch and the middle of the sandwich had a great savory, spicy, complex flavor.  The orange just below the top layer of bread is the tempeh.  It was very crunchy and I'm guessing very sauteed or fried.  Below that is a combination of eggplant and portobello, both cooked until incredibly soft.  Great combination of flavor and textures.
Hiding behind the sandwich is a cassaba and chili pepper chip.  I had no idea what it was but it was definitely a welcome change from potato chips or fries.
All I have to say is I don't have to look longingly at Katz's deli or Russ and Daughters knowing this is waiting for me just around the corner and down the block.