I had a few hours in Tampa and borrowed a crew car.  Not many choices but Viitals popped up on Happy Cow and I was craving a green smoothie in the worst way.  Needed.  Kale.  Now.
I passed it by the first time as it is located on the backside of the "L" of a strip mall.  You have to make a right into the parking lot, (or street) and it's on your right.  If you're driving you actually have to look over your right shoulder to see it.  It's there, you just have to look.  You can't miss the sign though. 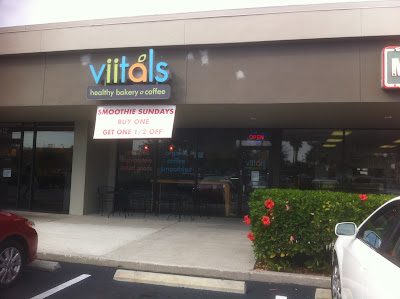 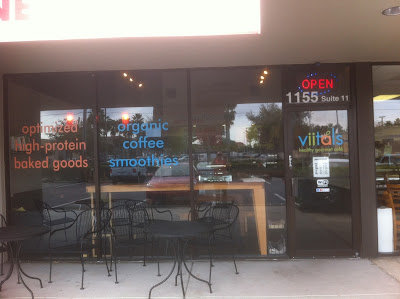 There is a whole menu board of smoothies and green drinks on the wall behind the counter.  I find it somewhat difficult to make a decision about the slight differences between them as you'll see 2 pictures lower but Evan, (spelled Ivan), helped.  First off though the decision to replace kale with spinach was an easy one as he doesn't carry kale.

I did stop short a few times to look at the vegan cake display.  I had a hard time focusing.  Sugar plum fairies were dancing in my head and sugar spike memories were making me swoon.  They looked so good.  But green was also on my mind and my body. 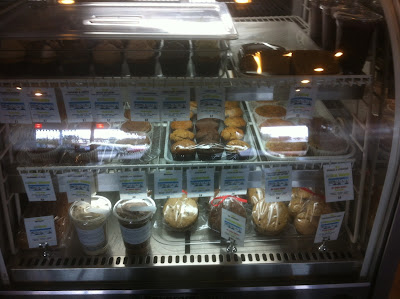 Ivan making the goodness.  Behind me are about 10 tables.  Someone was working on a laptop so I'm assuming there is internet connectivity.  The place is bright and happy although wasn't busy enough.  Ivan said he was in business for about 6 months so come on TAMPA and support this guy! 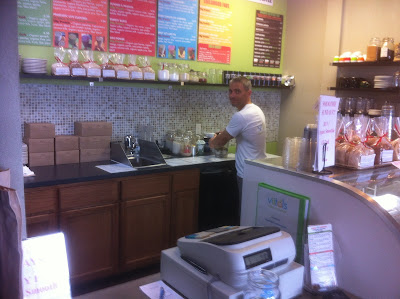 Here you can see the different options available.  I just decide what I want, then add what's not included.  I added my spinach to the Ultragreen.  After I read the menu a few times it all sort of blends together. 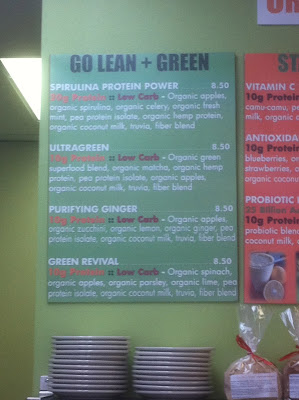 There are a bunch of different muffins and cupcakes.  I applaud the level of labeling.  Everything is labeled vegan/gluten free/soy free/etc., and most of the items, (I didn't read all the labels), seemed to be vegan. 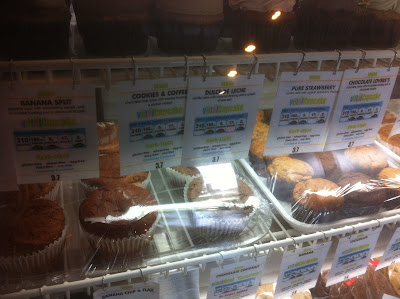 These two items also caught my eye.  they are "Meal 'Complete'" items and according to Ivan, who is a semi-retired competitive body builder, contains the "correct" balance of carbs, protein, and fat.  I was saddened to learn that although he tried a vegan diet it didn't work out for him and he now has added animal protein back into his personal diet.  I would have liked to sit down over a beer with him and talk about Brazier and Cheeke and the other bodybuilders who made it work on a vegan diet, to compare what he ate vs what they ate but time was a bit tight and he was, after all, at work.

That being said, I bought one each of the meals. 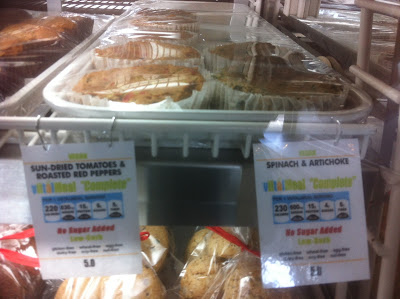 The green smoothie was thick and rich.  It didn't taste "grassy" but had a hint of green garden flavor with the sweetness of the apples balancing it out.  I could have downed three of them. 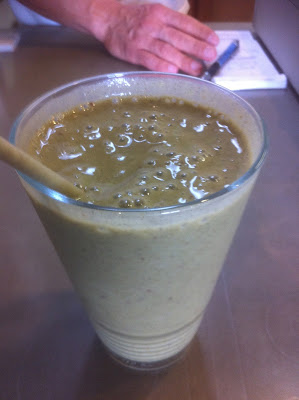 Here's a bit about Viitals on a laminated card that was on one of the tables.  I wasn't able to read it all there but it says they are mostly a Vegetarian/Vegan place.  I don't know if that means that some of their baked goods contain eggs.  I do know that it says all of their baked goods are made in-house from scratch.  Bravo on having total control over your ingredients. 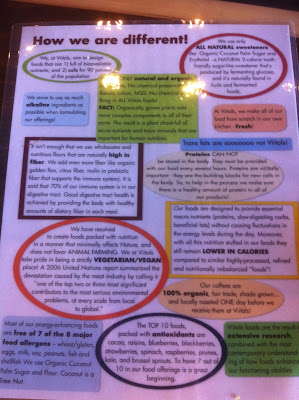 After I bid Viitals adieu, I started thinking about restocking my cooler bag for the next few meals.  I stopped by a Whole Foods and lo and behold, all the rave, Quorn Vegan Burgers.  This of course resulted in the "How come there's cholesterol in vegan burgers?" question and of course Quorn's answer. 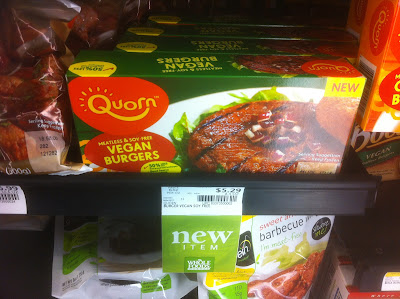 I am also in awe of the number of prepared flavored tofu and tempeh options out there.  Also, the variety of garden/veggie burgers.  Someday, when I retire, and I'm really really hungry, I'll do a taste test. 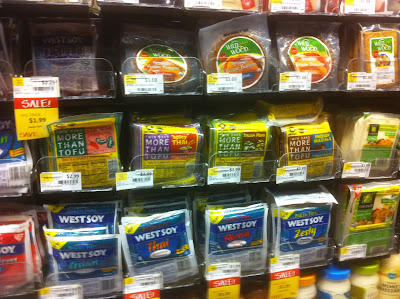 I think Whole Foods, in their existence as a corporation and with their goal of making money firmly centered in their sights, does some really messed up things as far as selling animals is concerned.  I know they are at heart a Supermarket.  I still don't like to see "Humanely" raised meat sold there.  I do applaud them for their expansive selection of foods on the opposite end of the spectrum, namely vegan options.  It's almost guaranteed that if it's vegan, (especially local vegan foods), it's going to be in a Whole Foods somewhere.

I also have to applaud Whole Foods because right next to their "cheese" events which turn my stomach now are ads for RAW foods and the Engine 2 28 day challenge.  So while catering to those who haven't changed their diets for compassion, health or environmental reasons they still help to put the thought into peoples heads that there are options out there.  If the demand for meat decreases, guess what folks, the size of the butcher counters will shrink.  It's a simple supply and demand.  That's why I think it's a waste of time to champion welfare causes like "enhanced battery cages" for chickens or "humanely raised meat" for cows.  Just put your efforts into making more vegans! 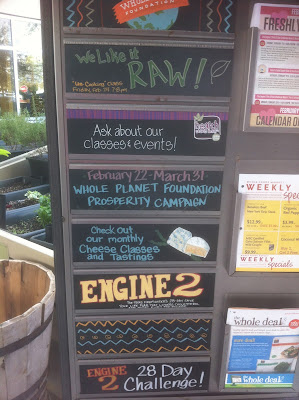 2 days later I finally warmed up the Viitals' Complete Meal.  It reminded me of my grandmother's potato kugel, which is like a knish, rather than a light airy soufflé.  It was dense and had that green spinach-y veggie flavor. I didn't definitely get the artichoke flavor but truth be told I was famished and wolfed it down without savoring the nuances of the food. I wouldn't say it was great but it certainly was good enough, especially after being carried around for 2 days in my cooler bag with an ice pack and finally ending up being tortured in a hotel microwave in West Palm Beach.  I would definitely buy 2 more if my travels bring me through Tampa, or at least give it a try in the store. 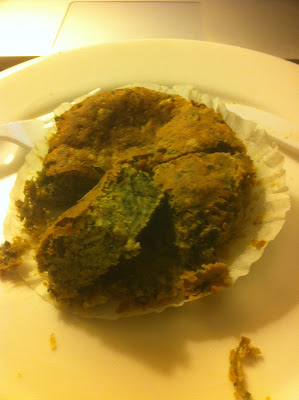 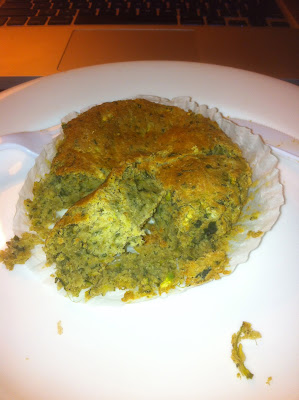 I have no idea why these pics didn't come out well but I enjoyed the taste of this "Complete" meal.  It was still dense but a bit more crumbly than the spinach and artichoke.  I enjoyed the tomato and pepper flavors which were both very present in each bite.  Once again, I think perhaps the experience would have been different had these not been schlepped across the country on an ice pack.  All in all, I'd say go to Viitals for a smoothie, to talk about protein needs, (or how over protein-ized our country is), competitive body building, or just to grab a vegan cupcake without having to ask 20 questions.
Support a vegan business Tampa! 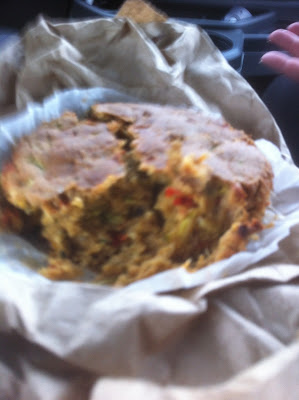 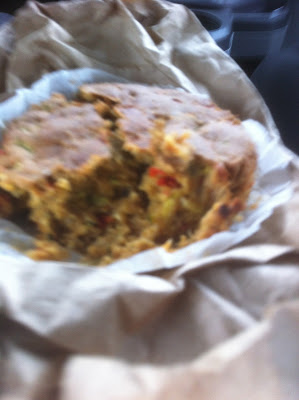 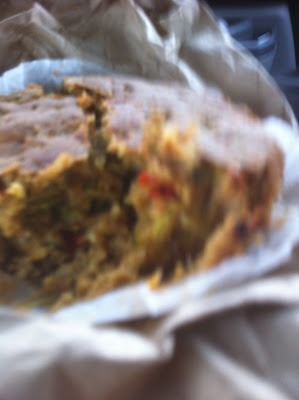