It is rare these days to stay at a major chain hotel property and not have some sort of breakfast spread. They range from minimal to expansive. I don't even check ingredients anymore since there's no likelihood of them coming up with an egg-free waffle mix or dairy free muffin. I cruise right by buffet steam tables where most guests are stuffing themselves on eggs and bacon and biscuits with sausage gravy and my only option is some version of home fries if I want to ask what kind of grease was used in its preparation. My waistline can certainly do without greasy potatoes though.

No, I'm making a beeline to the fruit and oatmeal. Fruit sometime is precut and bagged in a factory somewhere and although isn't fresh it is usually passable. There are also fresh bananas and apples in most places.

I also have come across a place or two that made their oatmeal with milk instead of water so I always ask.

Now if you read any of my posts you know I wouldnt write about breakfast options on the road to merely inform you that you can get mediocre fruit and oatmeal. There's going to be a lesson coming up sooner or later.

I'm in Sarasota, Florida and make it down to breakfast as the second hand sweeps past the closing minute. I figure, "Ahh, what the hell, they'll still have oatmeal."

It is a cafe sort of setting with a Starbucks motif. You know what? They already dumped out the oatmeal. It must have been the first thing. Oh well. The waiter said, "No problem. We can whip some up."
"Awesome," I think, in the most diminutive use of the word.

I go back to the counter several minutes later and the oatmeal tray comes out surrounded by small containers of nuts,(good), dried fruit, (good), brown sugar,(good), and a tiny pitcher of milk, (ohhh, bad).   I give the milk back and mumble something about not drinking milk.

So I'm sitting there eating this freshly made oatmeal, thinking about how this must be a different grain than oats as it has a different consistency.  I ask the waiter and he says, "Nope, just oatmeal."

"Yup, just fried up in a little butter to get it going faster and then just water."

Breakfast is over.  I know and understand what happened and why.  Well, eventually I do.  The cook is an older southern lady who wanted to please the customer, wanted to get me my breakfast and did so in the most expeditious way she knew how.  And this is probably the way she learned to cook from her mom, and in her mind, it adds a bit of homeyness to the dish, a bit more flavor and in her mind it was all good.  Later I talked to the manager of the hotel about how in this day and age, with if nothing else, food allergies are so pervasive that nobody should be changing any recipes for any reason, at least without a customer request or informing them, or asking them.  I also mentioned that many more of us out there are eating differently for ethical reasons and how this was rather ... upsetting.

He, (and the waiter), seemed to understand.  The manager asked if there was anything he could do.  My standard answer is, "Sure, I'd like you to give me the hotel."  That hasn't happened yet but I later asked him if he could email the entire company about why what happened and why and how to prevent it from happening again.  Although email wasn't an option he told me he'd mention it at the managers meeting he was attending in a few weeks.

This got me thinking, even when you think you know, you don't.  Because I do ask if the oatmeal was made with milk.  I just didn't today.  I did get a thousand points added to my loyalty card as a consolation prize though.

Fast forward a few days to a snowy morning in Pittsburg.  No oatmeal at breakfast.  The waitress says they can make me some and I ask, "Is it made with milk or butter?"  She has a puzzled look on her face.

"Are you sure?  No milk or butter right?"

"No, they don't make oatmeal with milk or butter."

A half a minute goes by, she comes back and she says, "Nope, no milk or butter."

The oatmeal comes, I take one taste and ask her to go in the kitchen and ask the chef if he used butter.

She comes out and she's blanched.  (She's also of color so this was a feat in and of itself).  Profusely apologetic.  Yes, there was in fact butter used to fry up the oatmeal.  She just asked about the milk because she couldn't imagine anyone using butter in oatmeal.  Chef comes out and says he's a "Good Ole Southern Boy."  I know that this is probably the way he watched his mother cook.  He also apologizes for not following the hotel's recipe.

Nonetheless, what do I need to do?

I got a free night out of this one.  But really, what do you have to do?  This:

Take a Zen moment and understand this is what is happening.  You tried.  You did as much as you could do to follow your ethics.  You didn't fail.  The system failed.  Realize that this will happen as you go through your vegan life.  You make every attempt.  Most of the time it works.  Just be ok with the fact that we are a long way from vegan perfection, a long way from a vegan option at every turn, a long way from a vegan world.  If you don't make every morsel you're going to eat you will, one day, eat something you don't want to.  Hopefully it won't make you sick even if it sickens you.  Keep fighting the good fight, peacefully, conscientiously, consistently.  That's how we educate the world.  One waiter and chef at a time.

Now the reason is obvious as to why these things happen.  They keep putting animal food in places we would never expect.  We make assumptions.  It's part of the way our minds work.  It's a shortcut to not read the label on lets say: 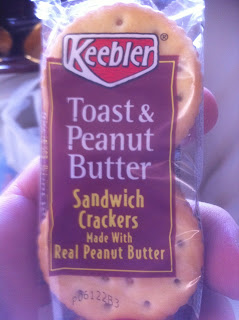 because really, toast and peanut butter, right?  This has been my go to airport vending machine since I became vegan.  But like the old joke goes, "How many vegans does it take to screw in a lightbulb?"  I tuned over the package with my mouth chomping on peanut butter goodness and of course I see: 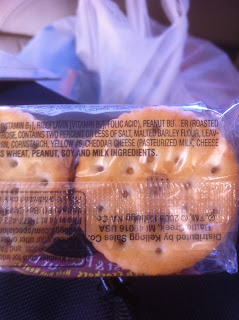 "MILK"
Huh?  Come ONNNNN!  Really?
Relax.  Another go to food bites the dust but I have my stock of Purefit Bars and The Simply Bar.  One step at a time. One day at a time.  Breathe, change, and change the world.
Oh, and the answer is two.  One vegan to turn the lightbulb and another to read the ingredients.
Marty
Posted by Marty at 8:11 AM