The timing worked and my good friend was around to pick me up and join me for dinner.  He's a great guy but so afraid of this kind of food he stopped at Arby's on the way to get me.  Spilled ketchup all over his car in a panic meal but he's come a long way and I'm sure just seeing the stuff made an impression on him.  Favorably or not I'm unsure as he's the kind of guy so set in his ways that when we used to fly together I could order exactly what he wanted from the Cracker Barrel menu.  It never varied.  If I took him to an Indian or Thai he would probably have made the same stop.  Some people change slowly.  His wife will drag him here.  I have hope.
I change when I walk into a vegan restaurant.  I do.  I really do.  I become like a 7 year old at Disneyland when Mickey appears from behind a wall.  I become ... quietly ecstatic.  Joy emanates from the essence of my being knowing I don't have to asks the litany, the dirge.  I can start eating like PacMan through yellow dots immediately.  And a buffet, my friends, well, there goes all traces of self control.  I don't pile my plates very high but I do turn going back into a long distance aerobic event worthy of becoming a tag team Olympic sport.
I mean, look at this spread.  All vegan.  All ... never ending.
Of course, I ran back to the dessert display case where many of the offerings were from Vegan Treats in Allentown.  Is VT making inroads in Pittsburg?  What a lucky town and they don't even know it.


Now I'm going to both cheat a little and make life easier for you.  I'm going to summarize this meal.  There were some hot (spicy) dishes, some fried comfort foods, some classics like Pad Thai and Fried Rice and some with other mock meats in various sauces and veggie combinations.  You all know my take on anything fried needing to be awarded first prize in, oh, anything and there were a few fried thing so heaven in my book just went up a notch.  Vegan heaven.  Fried fake shrimp that tastes like the ocean.  There were also Tofu dishes.  Most had a very nice blend of flavors, the sweet dishes not being overly clawing and the hot dishes just a gentle heat.  Of course I order my Bloody Marys with a shooter of Sirracha so who am I to judge heat.  Oh, there was a bottle of Sirracha too now that I think of it.  Most dishes had a degree of salt whether that was from Soy Sauce or salt so you'll be thirsty later for sure.
All in all I could have spent another hour there and forced them to pay the chef overtime but at some point you just have to say, "Hey!  Put the fork down and slowly move away from the table and no one gets hurt!"  So I did.

The only thing I didn't jump up and down about, (but ate non the less), were the buffet desserts.  They were ok but nothing like a Vegan Treats dessert.  Pay the money, eat the Peanut Butter Bomb, (if you like peanut butter), or anything else they make.  It will knock your impression of vegan desserts on it's cardboard flavorless butt! 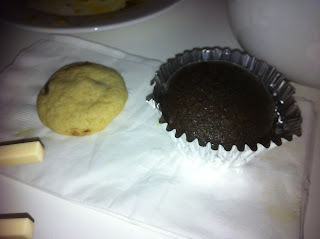