If you recall, the last visit to Spiral Diner ended up with a hurried conversion from leisurely sit down lunch to mad scramble out the door with take out in hand because some passengers decided to leave a few hours earlier than planned.
This time we had been at work since 4 AM to do a trip down to Dallas and upon arrival were "put into rest" for our legally required 10 hours off.  We still had a few hours after crashing in the hotel to enjoy a foray into one of my favorite places in the country.  I love, and don't use that word lightly, but love a place that combines good food and affordability in a casual atmosphere.
Since lunch was eaten in a very non vegan friendly place ... non veggie friendly come to think of it ... Grandpa Tony's Mexican on Mockingbird might be the name of it, my omnivore pilot friend enthusiastically joined me for dinner.  More about lunch in a moment.
I always have a bone chill when I walk into a place that is empty.  One that I like and think of ... hope is ... successful.  It was about 5:30 and the waitress said she didn't understand it because they had a packed lunch.  (whew!).  Not to worry, the place was half filled by the time we left.
I was starving, having had a plate of veggie fajitas for lunch consisting of only oily sauteed onions and peppers.  Yes, even with a Spanish speaker at the table, it must have been incomprehensible to the chef that someone could order just a plate of veggie fajitas so of course the first plate came with beef.

I needed a smoothie and this was with apple juice, almond, berries and bananas.  I asked the waiter to have them throw in a handful of greens, kale or spinach but apparently that couldn't be found.  This was still a cold, rich, fruity, thick refreshing drink. 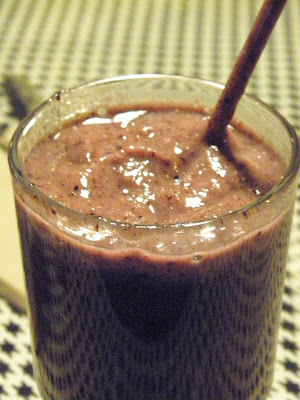 I wanted something fast.  I ordered the quesadilla for us.  We had gone through half before I realized I forgot to take the picture.  This was fantastic.  Crunchy on the outside and cheesy creaminess on the inside with several ingredients to not only add flavor but texture as well.  Corn, tofu, vegan cheesiness. And oh how nice to slather sour cream with guac and jalapenos again.

My buddy surprised me by asking about seitan.  He and I had been here once before and I thought there was a ray of hope shining through.  This burrito was better than his lunch.  His words, not mine.  It had seitan, (seared and crunchy on the outside, moist on the inside), and just loaded with flavor.
In a way I hate coming here because no matter what I order I want 3 other things on the menu as well and always feel deprived in some incomprehensible way.  Today I went with the Jamaican Jerk BBQ Sandwich with a side of apple slices.  This sandwich has a great combination of heat from the jerk and sweet from the pineapple.  The thing just disappeared.  I just hope that the writing in sauce was the name of the food and not the chef telling me what he thought of me!


This was an outstanding meal of comfort food and had my omnivore friend remarking about what a good meal this was.  If that is alone any measure of vegan quality I'd say this place more than makes the grade.  Can't wait to be back.