Ok, we're not talking about fine dining here, just slinging hash and eggs and all sorts of breakfast meats as fast as could be.  I sat watching the pass and the three cooks.  It looked like there were three hundred waitresses they moved so fast, with such efficiency of movement: plate on arm, butter scoop, glass, water, lemon wedge and gone.  Another plate of cholesterol on it's way.
And it was all so so so unhealthy.  Why was I there?  The pilot I was with wanted one of their dishes for breakfast.  I tagged along almost as an experiment to see how IHop would do with a vegan in it's midst.  And they didn't do too badly.
My waitress Melissa was efficient and took everything in stride.  Not once did I get a raised eyebrow or rolled eyes as I was expecting.  Florida isn't the most vegan or even vegetarian of places and I Hop hasn't won any awards for it's healthy fare.  I started out slowly and gently with her.
"Got a fruit plate?"
"Sure."
"Fresh?"
"Sure, fresh out of the jar."
I'm gonna like this one.  "OK, I'll have that."  I then pull out my iPhone and google IHop vegan and a bunch of hits fill the screen.  I see english muffin, hash brown potatoes and veggies.  I ask the waitress for an english muffin with margarine, hash browns with all the veggies they have including spinach.  My buddy, who usually is doing this explaining in Spanish, then tells her I'm a vegan and don't eat any animal products.  It's like I have an agent at the table.
Melissa puts the english muffin down a little bit later and apologizes as there is no margarine.  I think, "hmmm..." (that's the sound of me thinking), and ask about oil.  Olive, vegetable, any at all?  I hear her talking to the cook and I hear the word, "vegan," and think, "hmmmm..." (again), she's really working this for me.  I also hear her repeat my request for the veggies to be cooked until they're soft.
She comes back with a small plastic cup of yellow stuff and tells me the cook assured her it's a butter substitute and although it tasted like butter it was animal free.  I drizzle it on the english and smear it with jelly.  Not a bad couple of bites.  I can't help but think of the mulit-syllablic ingredients in it and how my cells are probably bursting in protest as it makes its way down my throat.
My plate of food comes and I'm impressed.  Not impressed like the real world but I'm impressed that this colorful plate of non animal products was placed before me at IHop.  Spinach, mushrooms, onions, peppers and tomatoes over a huge mound of mixed crispy and creamy potatoes.  I can't say that they weren't all cooked on a grill that just had a few dozen rashers of bacon cooked on it but I feel that I can only do what I can do where I can do it, so with good intentions and a plate of seemingly exactly what I asked for, I chowed down. 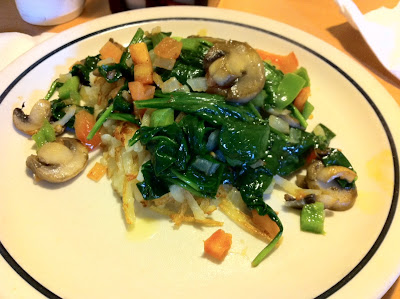 The only critique I had was that the veggies were really a thin layer over the potatoes.  I know starch is cheaper than veggies.  I also know I'm a, "clean your plate," kind of guy.  I probably should have ordered a double order of the veggies and a side of potatoes but I'll file that away in the back of my mind for the next time the other pilot I'm with has a craving for his Spinach Omelette and we're back in Sarasota. 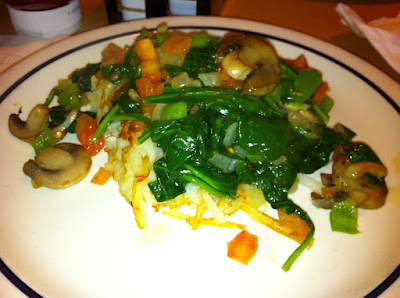 I live in Florida just outside of Jacksonville and when I saw your post I said "Wow this guy is brave". I would have run into a grocery store for some fresh fruit first. That "fake" butter looked really strange. Are you glowing? lol
Curious why you wanted the vegetables cooked real soft. I'd be afraid of anything touching their grill or cutting services. Glad it worked out for you!