Eating Vegan on the Road Day 6 and 7

Day six started in the hotel room with a boca burger, some daiya, some microwaves and a deli thin.  Off to the airport a few hours later where 1/2 of the Native Foods burger was heated along with an Amy's burrito and more daiya.  (I swear if they made injectable Daiya they'd be selling it on street corners and alleyways).

Before the flight we hit a Supermarket in Boston and I picked up some Sabra's Buffalo Hummus, (not impressive, not hot, not terrible but I prefer the Spicy kind), and a bag of organic carrots.  I was so hungry about an hour out of San Francisco that I dug out the carrots and used a few of them to dig into the dip.

Nothing really exciting, (see my review of the Cheeseburger on day 4). This day.  Mostly stuff that I had.

The Doubletree in SFO doesn't have any fridges in the room and when I checked in it was late.  I didn't get the sense that the desk clerk was going to spend a lot of time or effort tracking one down so I just handed over my cooler and shopping bag and called it a night.

The only thing I took was 50% of my mandatory foodal requirements.  And this is how I kept it cool until the morning cup of necessity:

Now I'm off to Que SeRaw SeRaw for a quick bite before heading over to Colorado later today.


What a nice quaint place.  You can see the love and dedication.  No slickness here, just a small but diverse display of raw eats. 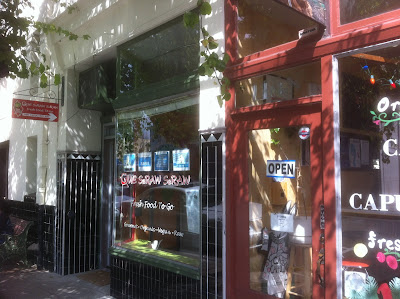 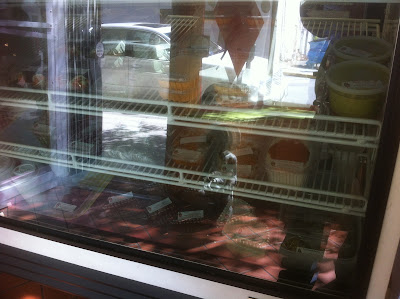 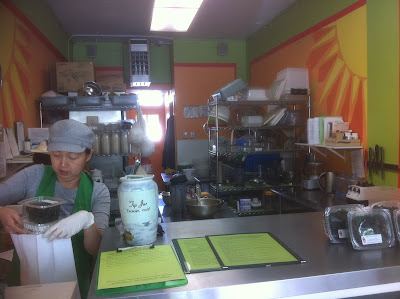 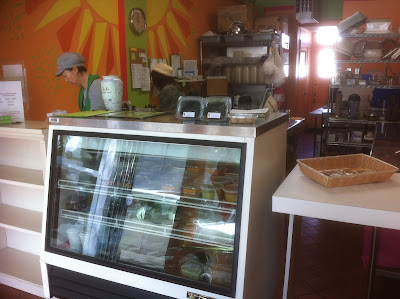 It's not very big and that is the only display case they have.  There must be about 15 or so choices.
The Kale Snacks were different then the ones I get in my local health food store.  It's a small container for $7 but without the nutritional yeast I was used to it fell short of my expectations.  Not bad, just that my palate was expecting something different.  It had a little acidic bite from the lime. 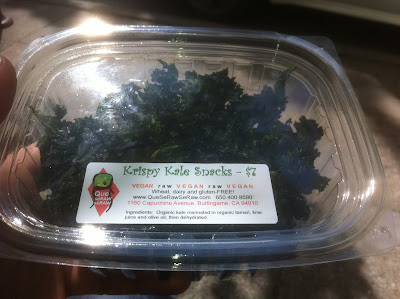 The tuna is a snapback in smell to my youth.  If you didn't know it wasn't tuna salad you wouldn't be able to tell by the smell.  The consistency is a bit different.  A big grainier, less creamy than you remember (maybe), less smooth.  You can also taste the bite of the acid from the lemon.  I could definitely make a sandwich with this and actually I think I did at some point. 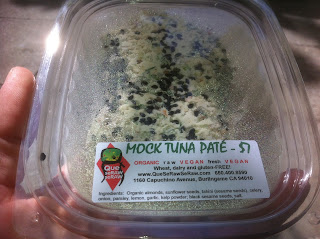 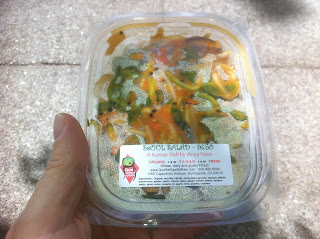 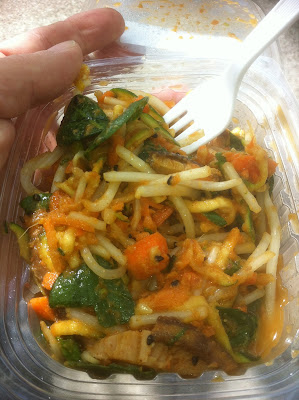 The Seoul salad is a mixture of crisp fresh veggies including mung bean sprouts, zucchini, carrots, sprouts, spinach and mushrooms with some apple.  The flavorings bring out a sharp crispness and the cayenne adds a down the throat heat. 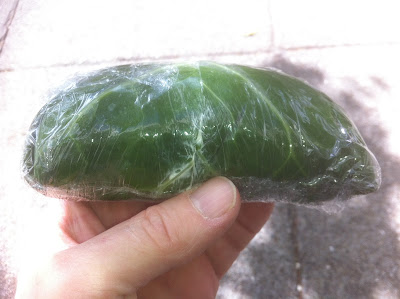 This is the Collard Wrap.  I ate it another day and it was raw veggies wrapped in collard.  Pretty self explanatory.

On the corner is a health food market and I always like browsing to see what other products are being offered around the country by local boutique food companies.  Here are a few wraps on the shelf.  I so wish all products that are vegan, (even if by default), had a sticker as large as these! 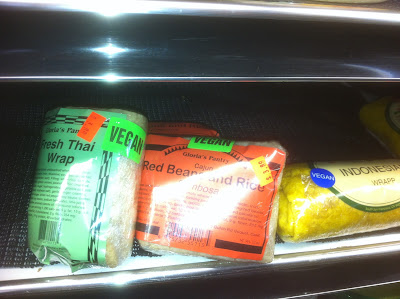 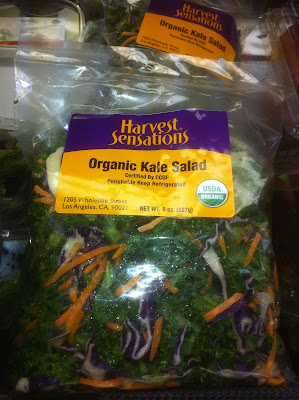 I've seen packaged kale more and more but never a kale "salad" mix.  Nice that it's organic as well! 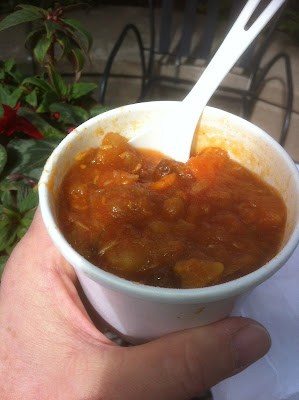 There were also some soups available.  This of course is a veggie soup.  It was thick like a stew and now that it's been a few weeks I'm remembering a curry flavor. 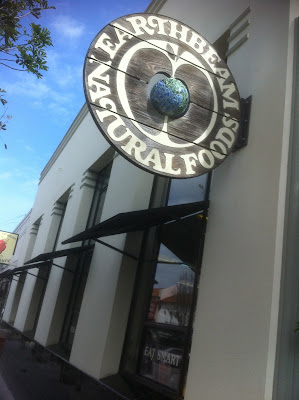 And of course a few shots of Burlingame. 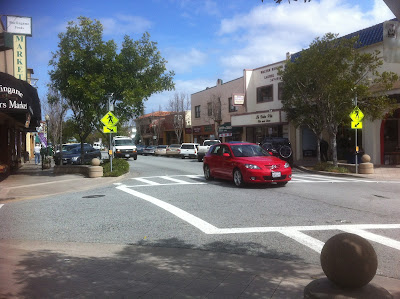 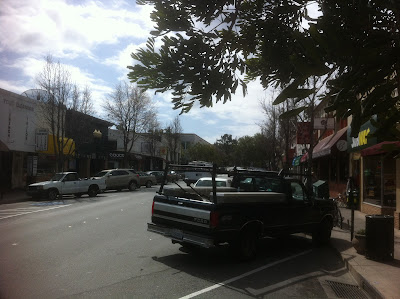 Dinner tonite in Denver.  I was hoping for Watercourse or City o City but it just got too late.  We swung by Whole Foods.  I picked up another Silk, some Amy's breakfast entrees and a new salad dressing.  The Caesar Dressing also had a bit of a bite from the lemon but I wonder if I can take Dr. Fuhrman's Cashew Dressing on the road.  I make it and keep it in a jar in the fridge.  At some point I wonder that my plastic squeeze bottles will leak and make a mess all over everything so I tend to go with the prepackaged foods in the containers they are sold in.

It's funny.  After 7 days on the road I have accumulated this amount of food and I'm now, (this is unusual), traveling with a shopping bag as well.  Tomorrow this will be culled down and I'll be back to just my cooler bag.  This is out of hand.  The passengers often have no catering on board.  Sometimes they have a lot.  This is what the fruit platter looked like, (yogurt spilled over about a third of it so I'll toss that), and I've been lucky so far to have had an abundance of untouched leftovers, mostly fruit. 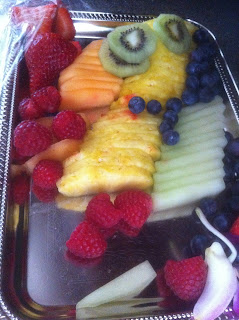 The salads didn't get eaten until tonight so the three beautiful salads got tossed.  Buying enough is a moving target.  I'd rather buy too much and have to toss some then find myself in a place where I don't have any vegan options.  And yes, it's happened.

Tonite for dinner I had about half of the salad I got in Boston with some of the Whole Foods dressing and the pre made Sunneen sandwich.