After the Amy's breakfast I was pretty much full for the day, did an hour on the elliptical, and then had a little hunger pang.  I opened up one of the small hummus containers and finished the carrots.

Now I wanted a bit of something different since I had some time to head out.  We took the T to Mass Ave and ended up at the Veggie Galaxy.  The Galaxy is a sort of vegan ish place.  Everything is vegan except what isn't.  They serve eggs and dairy and cheese but from what I can garner the only entree that isn't vegan is the mac and cheese, which comes both ways.  All that being said, vegan is easy here.  Eggs are cooked on a separate grill.

A few shots through the front window.  This is actually showing behind the register, the cake carousel, and the line behind the counter. 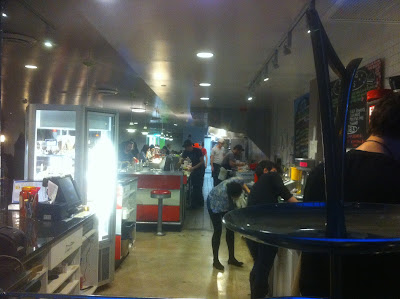 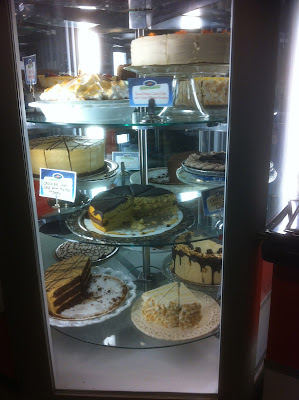 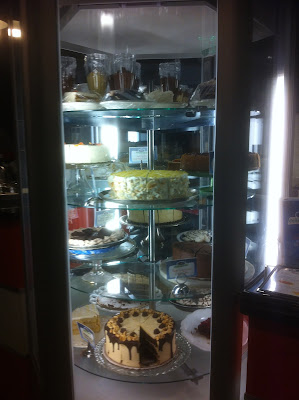 I didn't' taste this but the report from my omnivore friend was that it was excellent.  There was nothing left on the plate, which for an omnivore, in my mind, speaks volumes. 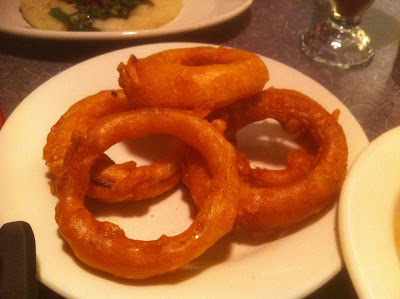 I am an onion ring junkie.  Although these were good and I'd want one on my burger I wouldn't use up the calories on a whole order again.  They were very crispy on the outside but the batter didn't have that flaky texture I enjoy.  The onions were sweet and if you don't take a good bite out of the ring they'll pull out.  That being said there was only a small bit of ketchup on the plate by the time we were done with them.

I'm not a crazy over Mac N Cheese kind of guy although I do enjoy it.  It brings me back to the carefree eating of comfort foods we all seemed to have had in our younger days.  Unless you're younger now, then, uh, never mind ... age is only in your mind.  Ha ha.

This is an excellent dish but the cheese aspect wasn't as gooey and slurpy as I generally prefer.  It was a drier baked macaroni dish and certainly stands up on its own.  It had some interesting flavors and if I recall an undertone of cumin and turmeric among others.  The pasta was perfect, neither too soft or too al dente.  There is no escaping though, that the eggplant needed more time in the oven as it was decidedly a bit undercooked.  I'd order this dish again though.  This is actually a child's order since there is not a "side" of Baked Mac.

Now for my dish which I will say right up front I flipped for.  This is what a diner is supposed to serve and how they're supposed to serve it.  (I just made that up, there being of course, no "Rules for Diners" in the Library of Congress ... just in my own head).

This dish is served on 2 slices of toasted bread, a literal pile of seitan and a rich wine/balsamic reduction worthy of it's own award.  The seitan was a great texture, combining soft and chewy and mimicking meat very closely.  It's served over a slathering of mustard beans, (although I don't recall the flavor of mustard ... memory going and all that), onions and chard.  Wonderful flavor combinations.

Then of course, being from Brooklyn, I laced the top with ketchup just to leave my mark.  This was one of the more delicious and hand made dishes I have had in a vegan eatery.  This was worth every penny and if I get back I will makes sure that one of us at the table gets this.

On to the desserts.  I used to work in a diner and somehow the desserts always looked better than they tasted.  Perhaps this is a good thing but by no means do I mean they were disappointing.  The Chocolate Cream Pie was light and airy and just smooched sweet creamy chocolate in your mouth, over your tongue, under your tongue and slid so wonderfully down your throat.  Satisfying to a T yet I think trying to remember a "real" Boston Cream Pie it missed the mark by just a bit.  I was never a big cream pie aficionado so perhaps some others can chime in here.  Once again it was a very good dessert but with a whole carousel of choices I'll wait for someone else to order it again for my second taste. 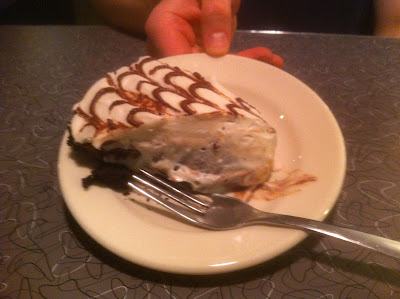 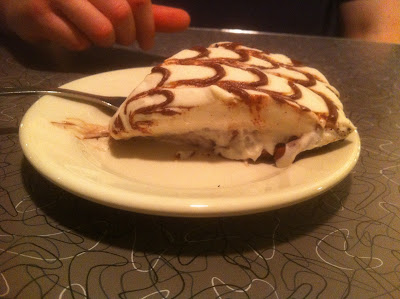 The Taza Chocolate Layer Cake was a new experience for me.  It was a pow, in your mouth, chocolate but not as sweet as you'd think looking at it.  It had a grainier texture than it looks like it has and speaks of chocolate like a fine wine.  Perhaps it isn't sweet so as not to disguise the essence of the cocoa.  A very dense cake I had to pause and order the coffee which this cake needed as a perfect compliment.  My one bone to pick is that the soy for coffee is soy milk and not creamer.  Just my preference as the coffee never seems to get light enough with just alternative milks. 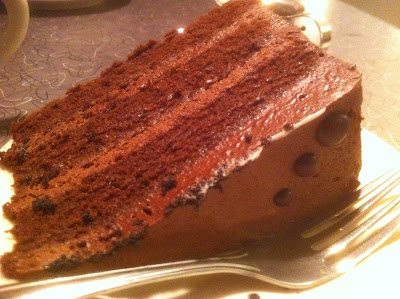 I watched the pass for a while, really just a section of the counter, as I had a good view from my seat and the food coming out was not only piled high for those of you us out there with huge appetites but it was colorful and artistic.  Although the glare on the Beer Batter House Smoked Tofu prevents you from seeing the texture the dish just yells, "crunchy."  To the right is the Vegetable Pot Pie which I truly had to hold myself back from just grabbing a fork for a taste. 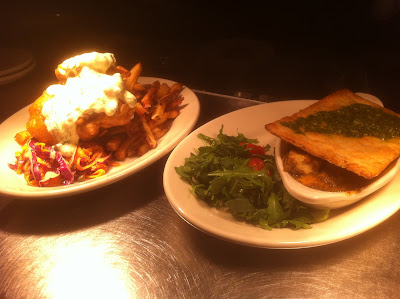