Not bad, Chinese Food in Elkhart, IN

You can only eat so many boca burgers and salad and microwave only so many Amy's in a hotel room before you need a nice cooked meal.  I had nothing to base my decision on since there were not all that many vegan options, i.e., one "vegan friendly" place.  That actually means nothing as any steakhouse can be "vegan friendly" by offering a salad, so any omission foods, (meat dishes without the meat), do not vegan friendly make. 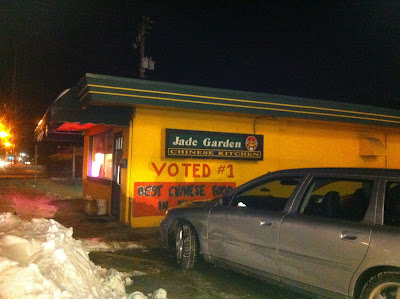 So, Jade Garden.  It's a tiny place with 4 tables and on this frigid January night, a small space heater.  The place was freezing and a couple, (turned out waiting for their take out food), had that little heater pointing right at their table in the corner.   It took a few cups of tea to warm up my fingers.  There's no vestibule so every time someone came in or left, (and there were about 8 people coming and going with their take out orders), the temperature dropped 30 degrees.

I thought the menu had some vegetable soong but apparently there are two restaurants.  The other restaurant, I was told,  had more tables, a sushi bar, and a regular bar in addition to what appears to be the menu found online.  I found out about this after I paid my bill but hopefully among that list of amenities one would have included heat.

I saw one vegetable dish and the waitress couldn't really tell me what was in the sauce but when I asked about chicken stock she said there wasn't any.  She then pointed out a dish with tofu and veggies and suggested that so I ordered it very spicy and I confirmed there was no animal products used in its preparation.  I asked about brown rice and she asked if I wanted fried rice.  I'm not in New York.  (I know that was a snobby thing to say but sometimes I think like a snobby New Yorker.)  I asked for veggie fried rice and she said there was only scallions in it.  It became apparent I wasn't going to get my custom made meal so I just said, "sure," and asked for no egg.  I'm surprised I remembered that.

The fried rice was good although not super flavorful and as promised, just had brown and scallions.  The tofu dish was nicely spicy but although the waitress later said it was only chili oil it had a tomato-ey, at first thought ketchup-y, taste.  Not bad but predicable flavor.  The dish had no bok choy but did have fresh and crunchy cooked broccoli and snow peas with a mix of the standard canned water chestnuts and mushrooms.  It was a very colorful dish as well.  The tofu was deep fried and had a bit of a chewy texture.  Not in a bad way but not just pressed and added to soak up the sauce.  It wasn't a "healthy" meal although it was vegan as far as I could tell and definitely satisfying and warming when the temp outside, (and inside), plummets. 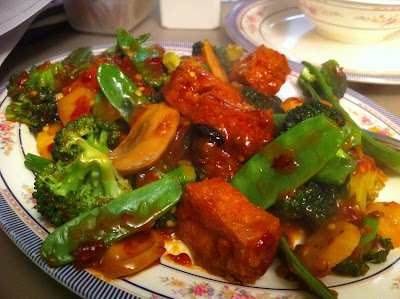 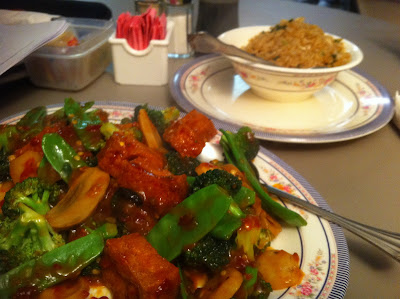 Next time I'm definitely going to give the other Jade Garden a try.  About this one, don't go in the winter if you are going to enjoy a sit down meal.

OK, so of course, at the end of the meal the waitress puts down the requisite fortune cookie and I with typical dopamine infused mindlessness open it up and down it in 2 chomps.  The out of curiosity I look at the wrapper.  Egg.  Egg?  Oh yes, apparently the fortune cookie would have just sucked without that uber special ingredient.  It's a good thing I truly believe that being vegan is not about perfection.  I mentioned it to the waitress in passing and reminded myself that apparently the word "vegan" is from the latin word, "veganeyeballis" which means read the damn labels.  If you want to be 100% sure about ingredients never ever eat out or only choose 100% vegan restaurants.  Uhm, yeah, that's not going to happen.