No vegan pizza near you? No problem!

Vegan pizza with seitan pepperoni, veggie sausage, and cashew ricotta. Because my bf is the best.twitpic.com/81vg48  I can't figure out why the pic isn't appearing but the link <--- works.
I had a craving for some real good vegan pizza.  I live on the Upper East Side of friggin' Manhattan and not ONE pizzeria has Daiya Cheese or vegan toppings.  Unless you want a plain ole veggie pie with just sauce.  What's that?  Someone called it a Bruschetta!  (www.cadryskitchen.com) Perhaps it was in one of her black and white vignettes.
So I ordered a whole wheat pie with veggies.  I think I asked for mushrooms, peppers and onions but they also threw on a ton of broccoli and tomatoes.  That's ok but if you load up a pizza it starts to steam the stuff on top instead of cooking it with dry heat, especially if it's wet stuff like tomato. 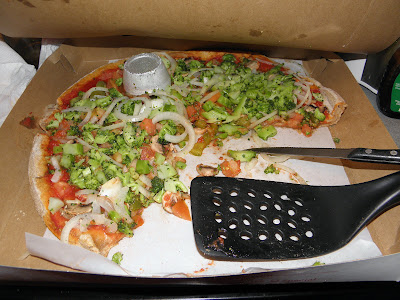 Next it was time to raid the fridge.  I had some cheese from Scotland that I wanted to finish up.  I got it from Vegan-essentials.com.  I wasn't thrilled with it, at almost $6 a pop but wanted to give it a try.  It's easier to just walk down to the 3 places within 5 blocks that have Daiya cheese. (OK, so there just MIGHT be an advantage or two to living in Manhattan).  I had two kinds of Daiya, the Bute Island Foods Mozzarella and some Smart Deli Pepperoni.  I was, so to speak, culinarily armed to the hilt.
I have a stone in the oven and I crank up the broiler and let it run for about 15 minutes.  Since this was going to be gloppy and drippy with melted cheese I put it on aluminum foil and tossed that on the stone, hoping to crisp up the bottom.  It didn't work.  And the Scot cheese didn't melt as well as the Daiya.  All that being said, it's not the worst way to get a vegan pizza on New Years Day Eve. 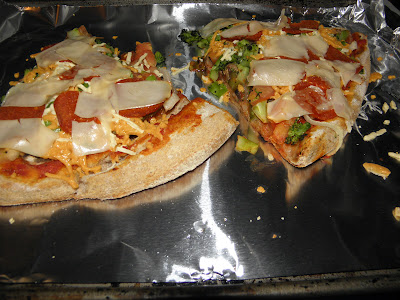 I still am not sure that Kayla's doesn't look better.
Posted by Marty at 8:19 PM