Life is serendipitous.  Look in just the right place at just the right time and you spend the rest of your life with your soulmate.  Sliding Doors and all that.
So I was bored and just looking at my iPhone Tweetdeck and I see the menu of the day scroll by.  Serendipitous, right?  I ask half heartedly where this feast is being served thinking there are a million places I'm NOT going to be this beautiful fall day, ready to file it away for a visit to some distant city, but the answer actually is the one place I AM going to be.  (Or could easily take a little detour to).  283 West 118th Street.  I'm game.  You never know, in New York City, about a neighborhood.  Or a particular block.  You can find either a diamond in the rough or a blemish in a diamond.  As you can see in the picture below this area of New York City has new Co-ops going up and still has blocks of what the quintessential NY is architecturally known for; brownstones.  This isn't really Harlem but Morningside Heights.  I just liked the Hiding in Harlem title.  What goes with Morningside Heights?  MMMmmm...?
This "restaurant" is a little subspace inside of a little space called Lee Lee's Bakery.  Lee's has it's own, (non vegan) history and a tradition of baking Jewish traditional sweets like rugaluch, and it was a tad disappointing, although I'm trying to limit my sweets to between none and non existent, to not be able to sample Mr. Lee's delicious looking treats.
You have to force your eyes away from the sweets and 90 degrees to your right is a hot counter manned by Aaron, the chef/owner's son.  About 10 items await your selection and there is a standup menu board at the ready to confound and befuddle you.  I wanted it all.


Different days have different themes and this was Soul Saturday.  Others are Fish Friday and Italian Night.  All vegan.  I got the XXLarge plate for 15 bucks plus an extra side for 4.  XXL.  It sort of sounds like I'm just a fat man buying a shirt.  I'd work on those names a bit.

I had a taste of the Lemon Crispy Nugget and although I could see chowing down on 6 or 20 of them with a side of fries I opted for the more sauced items.  I just like to sample the work of the chef and a fried nugget turns my brain into a caveman in a bite and a chew but breading something and frying it can't come close to showing off the chef's mastery of flavor profiles.


I had work to do at home so got everything to go which seems to be the way everyone who stopped by chose to consume their food.  There are also only 2 tables in a corner of the small bakery so finding a park bench or kitchen table to eat on might be a good plan.  You always lose a point or two when something goes into a "to go" container but this meal lost none of it's flavor.  Soul Saturday was a tin filled with most amazing southern comfort foods.

The corn muffin had a delicious sweet corn taste but the sides were a bit chewy.  The collards were well cooked.  I don't know how you can have a hot table with some items and have them not continually cook but the greens were no worse for the wear were definitely well cooked.  I found the predominant flavor to be salty and slightly bitter.

On to the ribs.  The protein itself has a sort of nutty-ish texture to it, almost as if you ground up tempeh and put it back together and less like the meat it was meant to replicate.  But ...  it was slathered in a sweet and smokey BBQ sauce.  Less tomatoey and more molasses-y and sweet and thick.  I was so hoping to have a BBQ just like this as I was getting a lot of tomato based BBQ sauces of late.  It reminded me of back in the day. All it was missing was a bone and I don't like bones in my food anymore so it lacked nothing.  But ... there was only 1 and I think that's less than a portion.  Aaron and I were talking about this and that and the other things in life so perhaps he just forgot a piece or two.  There were 3 chicken "thigh" sort of pieces and they did have a bone in them.  Well, a stick anyway.  Although Aaron said it wasn't from May Wah I've seen this kind of protein around.  It's a meaty protein with a touch of sweet and was simmered in a delicious savory stew.  You just pick up the piece by the stick and bite into the soft meat.  It gently pulls away from the stick.

The Mac and "Cheese" gets its own paragraph.  I can describe this side dish in one word. ILLEGAL.  This is so creamy and cheesy if it's not it should be because I think this stuff has to be damn near addicting.  Mac in a mac should, IMHO, be soft and very far from al dente.  It should be bathed in a cheese sauce with a tinge of sharpness and a supporting tone of sweet and this was all that.  If living without cheese is keeping you from being a vegan then you should come here and eat this so I don't have to listen to that stupid excuse anymore.  Balls!

The Baked Yams with Raisins and Coconut were my number two choice.  The texture of the yams were perfect and I, once again, don't know how you do this on a steam table but they were cooked with just a bit of tooth left in them  yet soft enough to mush with your tongue.  The sweet flavor was either maple or brown sugar, (I kept going back and forth), and combined with the coconut and raisins reminded me of a dish I used to have as a kid called candied sweet potatoes.

I mostly eat salads and fruits these days in my Dr. Fuhrman Nutritarian vegan diet of unprocessed foods but this is definitely a place where, for $15 you can compassionately cheat feast like a vegan king. 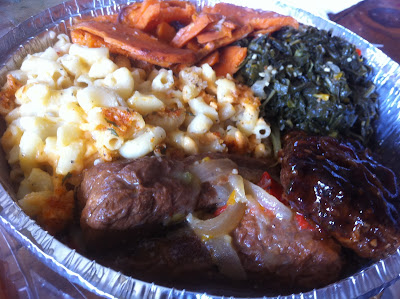 If you're in the neighborhood, (or not), you should find a way to stop by Lee Lee's and pick up a meal from Seasoned Vegan.  I only had one day of menu items and look forward to dropping in for their other themes.

Hi Marty
met you last night at Vegucated.
I love that you've reviewed this little place...it looks so sumptuous. If I wasn't eating strictly macro-biotic for the next few months I'd go there tomorrow!
Thanks.
Joy

Hi Joy,
Thanks for checking out the blog. Good luck with the macro diet and give me a holler when you're done and maybe we can meet up for lunch one day.