This is a long one folks.  There are 3 places in this post:  Counter Culture, Conscious Cravings, and the Vegan Yacht.
I have looked forward to a night in Austin ever since the Food Network did that special on Vegans.  Or was it vegetarians.  And I looked up vegan Austin and saw choice after choice after choice.  My facebook buddies at Engine 2 diet and Molly at Lonestarplate helped pick out a few places.
We started at Counter Culture for dinner.  I was traveling with a new crewmember whose dietary inclinations I hadn't been able to nail down but I got the "If it's good I'll eat it," vibe. I was actually surprised, coming from NYC and basically having either hot dog cart sized food vendors or mega Taco Trucks, (Yeah, like on the Great American Food Truck Race), when I almost drove by this small sky blue trailer.  (You will always be in my heart Seabirds).
I do love the name.  Aren't all of us vegans a bit counter?

There were only 5 sandwiches on the menu and in the spirit of taking one for the team I got both of the ones that caught my eye.  Molly met us there and although she had already eaten, joined us in conversation at the darkening table when the food was ready.

There were things I liked and didn't like about each sandwich.  First, I love a sandwich.  I thought this bread was a tad on the dry side and as such sort of pushed the insides out with each bite.  I loved the seitan.  It had a nice rich flavor and texturally was something to sink your teeth into.  I have to say though, that for a Philly Cheese Steak, it missed the mark.  Seitan in that sandwich should be sliced thin, almost shaved, and this was thick slabs.  It was good but not a Philly  Cheese steak kind of consistency.  Also, the cashew cream "cheese".  It was tasty unto itself but didn't mimic the stringy cheesy-ness of the original sandwich.  The peppers and onions were sauteed to the perfect melt in your mouth texture.  Put this on a baguette style bread and swap over to Follow Your Heart or Daiya and I think the sandwich would rock. 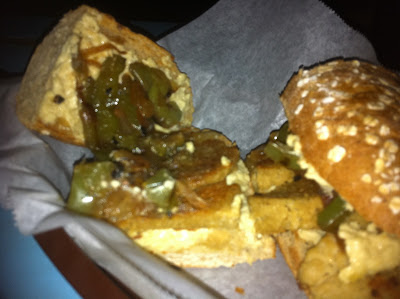 Now the Jackfruit.  Ah Jackfruit.  I've never had jackfruit before so when I heard it was a close imitation of pulled pork I was all in.  Once again, the bread was perhaps really fresh earlier in the day and this was closing time, but I thought it was a little drier than I'd have liked.  As for the main ingredient, I wasn't impressed.  The jackfruit was canned and perhaps it needed a bit more washing but it had that "canny" or briny taste that canned water chestnuts or canned bamboo pick up.  The BBQ sauce had a piquant tone to it and with the pickles shifted away a bit from the classic pulled pork taste but was good.  It didn't cover up the tinny-ness of the fruit though.  Texturally it was interesting.  There was plenty of stringy-ness but also had small pieces of a more fruit texture.

I went out and bought 4 cans and jars of jackfruit just to see what it's like in it's initial form. Stay tuned.


What we ordered that I don't unfortunately have a picture of was the raw Chocolate Mint Cheesecake.  This rocked. If Molly wasn't there, and if I was the one who ordered it, I would have scarfed the whole thing down, uncontrollably.  The mint was a soft undertone for the chocolate and the consistency was exactly like cheesecake except it had little cocoa nibs which made it more like a chunky cheesecake. I'm not sure about the nibishy thing but all in all this one is a keeper.


Right next door to Counter Culture is the Monkey Wrench Bookstore.  I am reading "Green is the New Red" and Molly said the bookstore was mentioned as a place where activism and organizing had taken place in the past.  I would have liked to have gone in but it was, of course, closed early that night.

The next day we had an afternoon departure.  I really wanted to hit the Vegan Yacht.  I pulled out Happy Cow and looked up the Yacht but the hours listed said they opened at 3PM.  I thought about how nice it would be to sleep late every day and go to bed at the crack of dawn but set our course for Conscious Cravings, also highly recommended.

Conscious Cravings isn't vegan but everything can be made vegan.  There is always a little worry in the back of my mind at places like this but as far as I could tell everything came out as I had ordered.

Just to get going I ordered the Mango smoothie.  Not much to say about a smoothie except it had a nice balance of fruit and sweet, nothing overpowering.

Since we both were ready to chow down, the fries were our appetizer.  I thought they were ok, nothing special.  There was a hint of rosemary but it didn't seem to become evident until the bottom of the bag where there was a much higher ratio of rosemary leaves to fries.

The menu is mostly hot wraps and we chose 3 to split.  I'm going to say that if these were all hero/hoagie/submarine sandwiches, (depending on where you are in the country), they would have been a notch higher in my culinary book but all three were excellent.
The young lady working the window took our wraps back and put them in individual containers after cutting them in half after she heard we were going to share them.  I like when people are attuned to the needs of their customers.
The first wrap was the Spicy Chickpea Wrap.  (All of these had the whole wheat tortilla and all of the wraps were $5.00.  How can you go wrong?  You can also substitute the wrap for a bed of quinoa).   This was a nice fusion of Indian food in a wrap.  It was spicy but the heat level was a comfortable warm, nothing killer, and blended so well with all the ingredients.  A bit messy to eat, stop whining, just grab a knife and fork or a few napkins.

The second wrap was highly recommended (and I highly recommend it as well!), and although didn't have near the spice as the first wrap had a nice flavor.  The description said refreshing and I concur.  Without better words to describe the sauce, it was green, clean and crisp and ... refreshing. 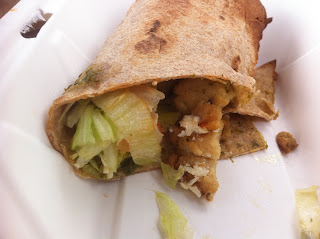 The last wrap was the BBQ and it was a thicker sauce than was found the previous night. The seitan in both sandwiches was breaded and fried and cooked to a melt in your mouth chewiness.  The BBQ sauce also had a bit of heat and I thought it was just the right blend of tomato, spice and heat.

I got a side order of the quinoa rice pilaf, (no picture), and in all probability we should have gotten at least one of the meals on this instead of the wrap.  It was light, fluffy, and although didn't pack a powerhouse of taste, it's the canvas to the rest of the dish.

Now although Happy Cow said it was closed, I just wanted to see where the Vegan Yacht was.  We drove by and lo and behold, it was open.  I mentioned that their website said they weren't open until 3PM and boy did I get some rearing back on some haunches.  "It's not OUR website!!" was the sort of reply I got.  Now guys, (and girl), I'm just saying here.  "We told Happy Cow a million times that that was wrong!!"  I get it but why are you making me feel like you're giving me the cold shoulder here?  I want to give you my money.  Pretend to be nice, ok?  Then again it started to rain almost as soon as we got there so maybe the whole world was in a pissy mood.

Still I was glad to have made it here.  Like one of those places I have on an unconscious mecca list.  Even though I didn't get the warm fuzzies from the staff?  owners?  whatever?
I did want to sample their food and figured it would be a decent meal after a few hours at 37,000 feet.

(I even struck up a conversation with about 6 patrons of the other food vendors in this circle of food carts in this unique small trailer park and opened up my sandwiches to sell them on the "vegan food looks great" concept.  I hope they were greeted with a tad more of a welcome than I was should they venture into the vegan waters the yacht sails on).

Both of these sandwiches were outstanding.  The ciabatta was soft on the inside and toothy on the crust.  The lettuce, although it looks like it dominates the sandwich, added just the right amount of green crunch.  The field roast has a delicious savory flavor and with the veganaise adding a creamy touch of fat, the olives in the bread a touch of salt, the tomato a touch of cool, and the cranberry a touch of sweet it was a perfect storm of flavor (notice the nautical weather reference here), and texture. 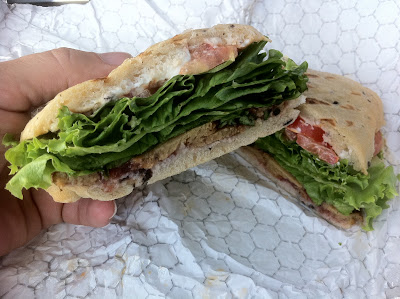 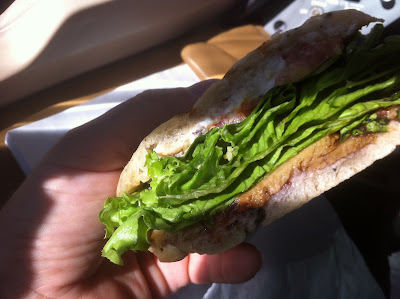 The Mock Chick'n sandwich had a bit more of the "healthy" sprouty flavor.  I would suggest, (without getting my head torn off), that the carrots got a little in the way of eating the sandwich and also was fighting for attention with the chick'n salad.  Cut them down to a mere few as an afterthought and this sandwich, for a cold sandwich, inches towards the top of the charts. 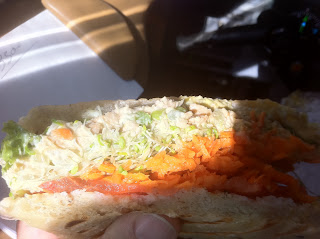 Austin has an absolutely amazing selection of inexpensive vegan offerings.  One of the 6 patrons eating in the rain, although admitted he wasn't vegan, suggested Beets as a more upscale place.
These places are all great for a quick bite or pickup for a trip but I look forward to sampling much more of what Vegan Austin has to offer.
Posted by Marty at 12:00 PM

I have every confidence that Conscious Cravings takes vegan food seriously, and wouldn't mess up an order. Cheese is the only non-vegan item they carry, and Daiya and dairy cheese look very different.

Next time you come to town, I won't eat dinner beforehand!

I'm glad you gave me some suggestions and thanks for meeting us!