Saturday was a whirlwind.  First a lecture by Melanie Joy, author of "Why We Love Dogs, Eat Pigs, and Wear Cows."

It was held at the Universalist Unitarian Congregation in Long Island.  The Long Island Vegan Meet up group was also, (entirely?) involved in it's organization.  I finally met Jennifer Green who heads up that group.  Coincidentally, a friend of mine sent me a Newsday article about her.  It mentioned that she works for HSUS.  I wish I had known about that before as I'd love to talk to her about some of the things they do.  Today however, she and all of the volunteers did a fantastic job of putting on this event.

For a 10 AM lecture it generated about 70 people which was outstanding.  I read Melanie's book a while back and it makes a lot of sense to explain why meat eating is so pervasive in our culture.  Just like sexism, speciesism, and racism, we look upon our meat eating as a belief system.  We don't even give it a second thought and that keeps the belief system alive.  She's named it "Carnism." 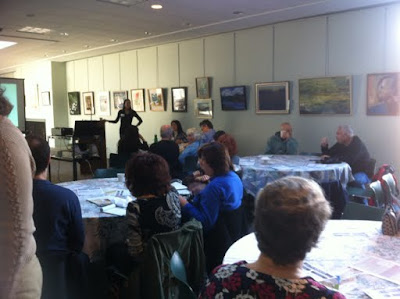 Melanie takes us flowingly from the innocence of childhood and Old MacDonald through the meat indoctrinated society of factory farming we live in today.  How we came from, "Be kind to animals," to "I'd like my steak medium rare."

The presentation was a multimedia one, with short clips of animal cruelty and animal farming, all to help bridge the gap between the "meat" and the "person" it once was. 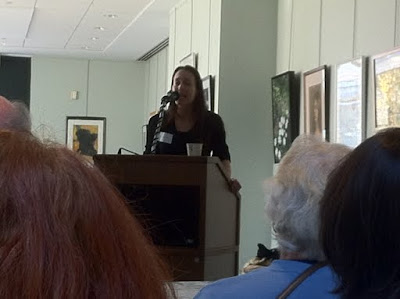 Melanie explains that on some level we don't want animals to suffer yet have created a belief system that puts it out of our minds.  We don't see different things, we see the same things differently and this is how people can stop thinking about death and animal "personhood" whilst chomping down on a double bacon cheeseburger.
She takes us through the 3 justification myths of meat eating:
Its natural
Its normal
Its necessary
and how the agricultural industrial complex and their millions of marketing dollars have turned them from myths to "facts."
Her lecture then turned towards what we can do and integrating our beliefs into our daily actions.  If we believe animals have a life that matters to THEM then we can consciously stop eating them, create other solutions to be the change we want to live.
One quote I've used a few times already came from a question about perfection.  "Perfection is the enemy of good." We can walk through life with intent and not worry about the few percent that we can't change.  I told someone the other night to stop eating the cow.  That takes care of 90%.  If you make a 90% change that is pretty good and not to worry about how and where animal products end up in foods and products that you don't know about.  If you try and avoid and something slips through your net, don't get all tripped up about it.  You're not eating the cow.
Afterward there was food put out.  Vegan food.  How nice not to have to ask.  (That of course was after someone pointed out to the event coordinators that when the coffee was put out with cow's milk that might not go over so well with many of the guests.  Kudos to whoever ran out and picked up a few containers of Soy Delicious!) 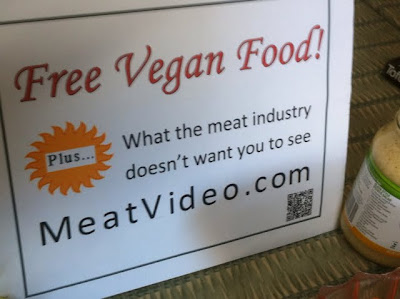 I had agreed to meet up with a parent of my daughter's classmate to partake in the Queens, NY part of the National Protest Against Kill Pounds.  Now I'm all against kill pounds.  I can talk to you for an hour about single issue campaigns and putting time into protecting one species and not another or one abuse and not another but I had the time and made the commitment and besides again, I had picked up a ton of Vegan Starter pamphlets at the UU Center.  If nothing else I thought I'd like to know, speaking about the gap in connecting that we just spoke about, how many of the anti dog and cat protesters aligned with veganism.
I didn't take any pics of the protest.  Don't know why I didn't think of it but amazingly, many of the people I talked to were vegans.  Everyone I talked to about it was receptive to the discussion and I handed out pamphlets to everyone I talked to.  (Passersby too!).
So who knows?  Maybe I made a vegan or two.
Then onto the presentation by Jenny Brown of Woodstock Farm Animal Sanctuary at the Jivamuktea Cafe, a part of the Jivamukti Yoga Center on Broadway and 14th Street.  First a bit of dinner though.  Caesar salad, romaine with croutons.  A delicious creamy dressing.  It didn't quit get the anchovy taste in there but was a well dressed salad with neither too much or too little dressing.  The smoothie was a tart/sour with a tinge of sweet.  Well played.
Jenny is one of the most impassioned people I ever heard talk about animals.  She went from A to Z and although she talked for almost two hours it was engrossing.  From Descartes, "Animals are mere machines", through "Live your values if you truly are opposed to animal cruelty," she took us through a history of attitudes towards animals.
Jenny spoke about environmental issues, health issues and compassion.  She spoke of the animals, how they live in prisons we create, their abilities and intelligences and conditions and how they literally are driven mad.  She spoke of many animals, from fish to goats to elephants and cows, giving a synopsis of their miserable lives.
If you can catch her at a speaking engagement, do.  She will relight the fire within if you ever feel it waning.
Afterwards I asked her a question that had been on my mind for a long time.  "If we have limited resources, why spend them to keep a few hundred animals alive as opposed to spending every dime on vegan outreach?"  Her answer surprised me.  She spoke of the transition in the minds of people when they see an animal up close and personal for the first time.  She talked of the realization that this is a someone, not a something and he or she has a personality, loves to play and relax and clearly shows they have their own reasons for living.  Jenny said the sanctuary is a vegan-maker.  Ahhh. Grasshopper understands now.
The other thing that impressed me is that Jenny is an abolitionist like myself.  She is less interested in making conditions in concentration camp like prisons better for the short miserable lives of the animals than she is in making vegans who won't eat them in the first place.  To her I say, "Rock on!"
Posted by Marty at 1:18 PM