Two Boots kicks it through the wickets and SCORES!!

After a NYC Vegetarian Meetup at The Vault at Pfaffs on Broadway, (history steeped wonderful venue but not exactly what I'd call a vegan friendly menu), I was walking to the train on Bleeker and spotted Two Boots Pizzeria.  I heard they were going all Daiya and poked my head in to see.  Eureka my friends.  Here's what I saw standing up in all it's glory on the glass countertop above the pizzas.
By popular demand.  Popular demand.  Know we know it worked at least once, where we popular people demanded and the powers that be, listened and acted.
I found out later that a slice could be made specifically on request that just had Daiya vegan cheese on it.  I'm going to assume that any combination you desire could be made with vegan cheese.  I personally think it's a boon for people who are lactose intolerant also and why the Pizza Makers Association of the World hasn't picked up on this and they all don't have big signs saying "We Now Serve Vegan and Lactose Free Cheese" in their windows just baffles me.  I've been to a few local places trying to do some outreach and lemme tell you, they're not following in the footsteps of trendsetters like John's of 12th Street, Viva Pizza, Three Brothers and now Two Boots.
The slice came with artichokes, shitake mushrooms, red onion and a criss cross of basil and red pepper pestos. 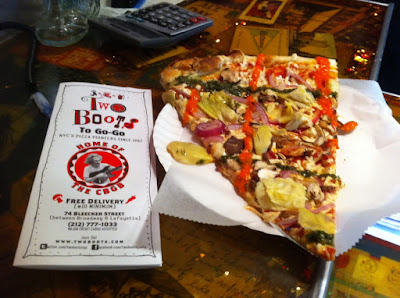 I enjoyed the slice but I'm not sure how much the artichokes really added to the flavor profile.  The mushrooms look and taste like they were sauteed inhouse but the artichokes were more like the canned or jarred variety.  The other thing with any pizza slice is that when you load it up it doesn't get that crispy crust but becomes more steamed and soggy-ish (soggier).  Next time I'm going to try a slice with less on top.
Daiya is daiya and it's not like there are nuances and different flavors as with the tons of different animal cheeses so that is a baseline wherever you go.  I'm so glad a new place picked up on it.  I love pizza and the more places with vegan options the better.  Thanks Two Boots.
Now lets get some home made seitan in the mix!