I've been stuck in Palm Beach, (how's that for incongruous), with a grounded airplane.  It's pretty amazing how one broken switch can render a whole plane useless but it's the switch to turn on the EFIS tubes, the Electronic Flight Information System.  That's all of the TV screens on one side of the cockpit.  And we can't go with half the instruments turned off.


Of course, as schedule often has it, we got in too late on Sunday to make it over to Darbster and they're closed on Monday and Tuesday.  I've been living out of the hotel room with a fridge full of salad, veggies, Daiya, Tofurky and Amy's. 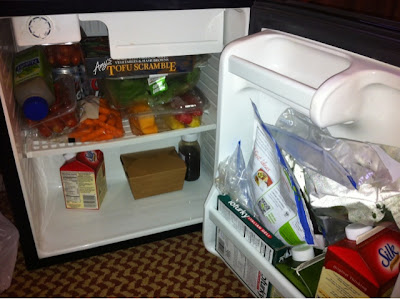 I'm in a full service Hilton and luckily I was also able to get a microwave.  This situation was ideal since my copilot had friends he hadn't seen in a long time and spend the few days with them leaving me to my in room culinary skills.  (Reheating).  Aside from a can of Sirracha Peas, (think Wasabi Peas), I've been pretty good about the calories and quality of foods so Darbster indeed was a treat.

I've usually ordered off the menu since the specials are raw or on the pricy side but tonight I made an exception.  The other reason is I can't make up my mind.  I want the soup, I want the wings, I want this that and the other thing.  I want a tempeh rueben and a cheeseburger.  My waiter was Drew and we had quite the conversation about vegan foods around the country.  I've definitely put Evolution Food in DC on my list.  It's not only nice to eat at a 100% vegan place where I don't have to ask any of the incessant 500 questions about chicken stock or egg in the ingredients but nice to relate to another vegan.  Comparing vegan mac n' cheese dishes across the country just doesn't happen every day.  I don't think you necessarily have to be a vegan to work in a vegan restaurant but there is that warm fuzzy when you ask and the answer is yes.  There's also live music and the gentle tones of acoustic guitar and a wonderful rich voice set a nice backdrop for a mood of relaxation.


I thought about my family back in NYC dealing with Sandy's wake but since we live on high ground in Manhattan survived relatively, no not relatively, we survived unscathed.  Sometimes you're just lucky and as someone very wise once said, "I'll take luck over skill any day."  Guilt assuaged.

Tonight I went for broke and ordered two of the 4 specials.  I passed up on the Tempeh Tacos (cooked) and went with the raw Stuffed Peppers and onion rings.  The onion rings intrigued me as they were also raw.  They looked cooked though, don't they?


The onions were dehydrated and then coated with a seasoned flax mixture.  They had a little bit less crunch than traditional onion rings (and about a gazillion less fat calories), and were much more chewy as the onion didn't break down but was just dried out.  I found the whole mouth concept very pleasing despite the overpowering onion kick that, well, raw onions have.  I got an onion taste in my mouth and an onion kick in my sinuses.  This was definitely a good substitute for fried rings and Afrin.

The raw sweet peppers were enough of an appetizer for one.  I'd have hated to share it as there were only three, (sliced in half for 6),  small peppers stuffed with the pate. The pate was supposed to have a bit of jalapeño but I think I was still breathing onion vapors and didn't get the jalapeño flavor from the filling.  Yet there was a bit of heat in my mouth.  The filling itself was cool, creamy and had a fine nut graininess from the almond cashew mix  and left a slight sweet taste on my tongue.  It was an interesting dish, I'm glad I tried it.  I enjoyed it but I'm a comfort food, substantial, stick to the ribs food kind of person and I think I'm going back to the wings next time.

The other special I ordered, (at $17 was about twice as much as some of the other options), was the Chicken Roulade.  I passed on the Collard Green roll as I'm not the biggest fan of wraps in collards.

It was an interesting treatment of the Gardein, (much of the protein at Darbster is Gardein), chicken cutlet, pounded flat and rolled around sautéed onions, green and red and peppers.  The peppers and onions, while bringing color and variety of texture to the dish, didn't add much in the way of flavor.  It was served over a bed of delicious black beans and light fluffy jasmine rice covered with a Guajillo chili sauce with a touch of cilantro.  The dish was beautifully presented and the flavors all worked well together.  The Guajillo sauce had a nice earthy tone and a trace of heat but had a bit less depth of flavor than I would have liked to really put the final wow/zing on the whole thing.  It was a good enough dish and if I had a table of four I'd order it because it would nicely compliment other dishes with its interesting and different taste.  It was a ton of food, (I took half back to the room), certainly a shareable portion and with the rest of the menu beckoning, although glad I ordered it, I'd look to the rest of the menu on my next visit. 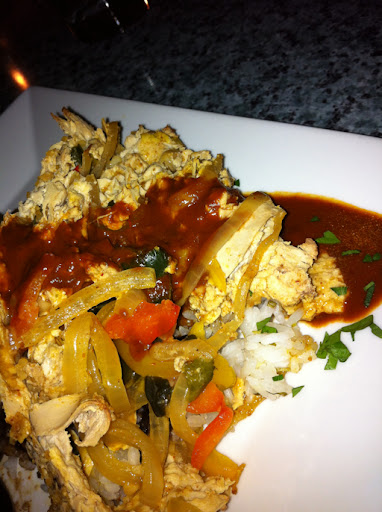 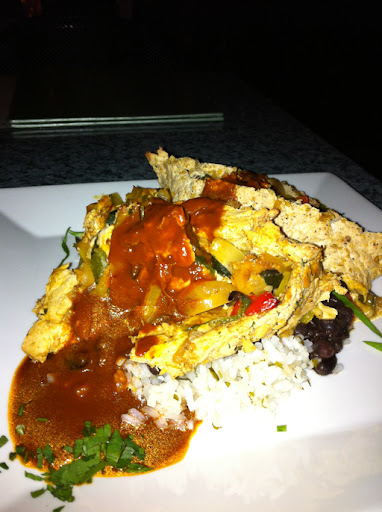 As I said I've been rather under control eating out of a fridge and microwave and thought this a perfectly rational reason to dump 2000 more calories on top of the meal with dessert.  And really, isn't this the perfect dessert picture?  Yes, it is.  The decaf, the brownie, the ice cream.  Awesome end to the meal.  The ice cream was of the coconut variety and the brownie was airy and moist and richly decadently chocolaty.  It was a perfect treat and a perfect ending to the meal. 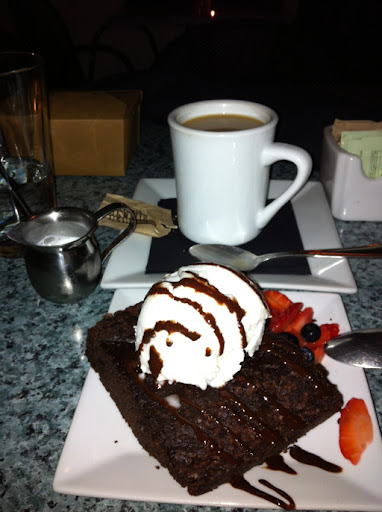 This wasn't so surprising since I splurged on everything.  You can do Darbster for less, (or more with a few drinks), as you'll see with lunch the next day, (below). 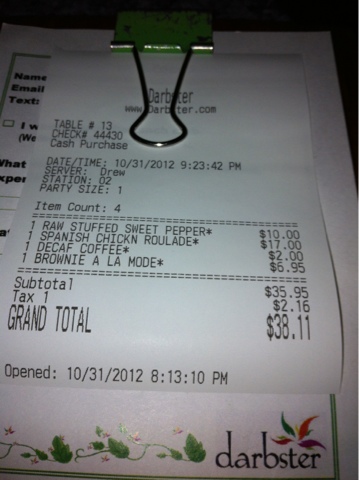 On each rotation I buy my copilot a vegan meal.  I do it for a few reasons but I want to show as many people as I can, (and for the price of an app and a sandwich how can you go wrong?), that vegan food can be tasty and as far from the image of tofu, leaves and twigs as is possible.  Plus, if they like one meal they're more than likely to agree to dine with me at other vegan establishments.

Darbster is a good place to do this.

We started with the Mac N Cheese.  This is a coconut milk and Daiya based sauce with Daiya shreds melted on top and a bread crumb topping.  It has a nice creamy texture, the pasta cook just right, and the bread crumbs adding a nice crunch.  It's a mixture of mozzarella and cheddar so if you like these products, (I mainline Daiya and will buy it in a schoolyard if I have to), you'll love this dish. 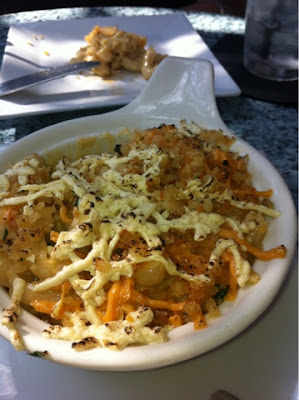 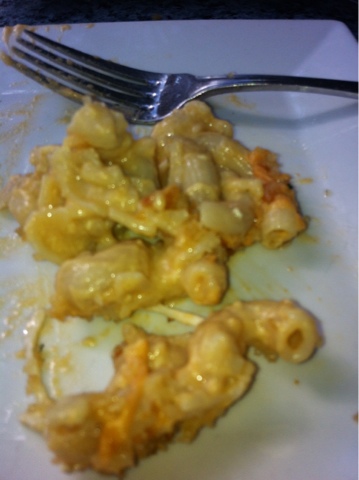 Next we had the Tree wings.  I'm not sure where the name comes from but the dish is a Gardein product and is the quintessential fried vegan wing.  It's got a crunch on the outside and moist chicken-y stuff on the inside, served with a house ranch and buffalo hot sauce.  I like them both, alternating between the mild heat of the Buffalo and the creamy basil of the ranch. 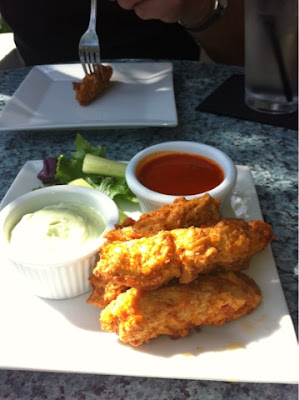 We split 2 sandwiches for lunch.  Unfortunately Darbster ran out of our first choice (and Ciabatta bread) but the special was a chicken pesto salsa Daiya and ended up on Rye.  It was our favorite.  The mix of cool salsa with warm chicken and cheese worked well as did the textures of the fresh and cooked.  The only thing was that this sandwich, on the bread that it was served on, became a bit of a mushy mess as the salsa soaked through the bottom slice.

I enjoyed the Reuben more than my friend as the taste is not quite like a Reuben.  It's still a hearty sandwich with kraut and Thousand Island dressing and it worked for me as I was looking more for a good sandwich than to see how close it could emulate something I didn't eat any more.

The fries were outstanding.  Salted just enough and fried to the point of crispness, (which in my view is the way fries are supposed to be, not an excuse to act like a sponge for oil), it was the perfect delivery system for ketchup. 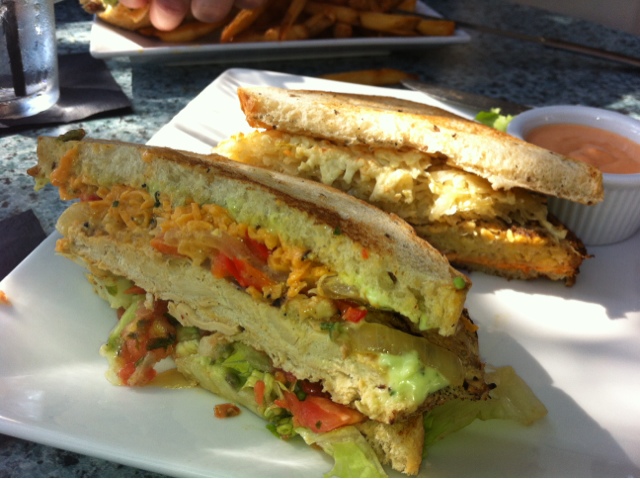 As you can see from the bill it was less for two of us to eat lunch than it was for me to eat dinner the night before. As with any restaurant, some things here are outstanding, some hit the mark squarely and some are just ok.  I'm going to stick to my favorites and walk away with a smile.  Just check the hours before you take a trek down here, (or up here), as they are closed Monday and Tuesday and also close between lunch and dinner, (I think between 3 and 5). 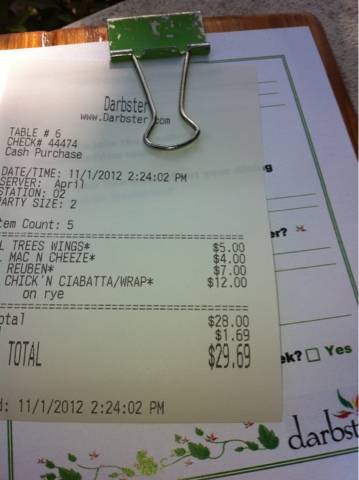