Finding ourselves all alone, this happening more often now that we are the parent's of a teenager, we wandered the Upper West Side of Manhattan with the deer in the headlights look of parents suddenly cut loose on an unexpected date night.  One of my favorite places, Blossom, beckoned.

Wow, what a great meal. Home runs all, except for the Sweet Potato Autumn roll which was a single at best.

The roll wasn't as good as it might have been if the carrots were sweeter or the other veggies came through. But they were't and it wasn't more than an ok dish. The the almond ginger was also not remarkable.  I was just waiting for a flavor punch commensurate with the colors and anticipation build up.  The workmanship might be worth the $11 but the taste profile wasn't.  Our waitress did say that it is sometimes better than others.

I basically ordered this appetizer because I was giving myself a few days of gluten free food.  Aside from the bites of seitan which my wife ordered idolizes everything else, (I ordered), was gluten free.

Seitan skewers were chared and richly deep bbq with a hint of sweet in the smoky flavor.  The slaw was bright and crisp and worked nicely to counter the bbq sauce.  The seitan was moist and almost "fatty" in a luscious sort of way.  How do they DO that?


The seitan marsala was a convert dish. Any meat eater would swear that vegan food was every bit as good as any with a dead animal ever was. On a bed of creamy mashed with just cooked until tender kale. Home run. 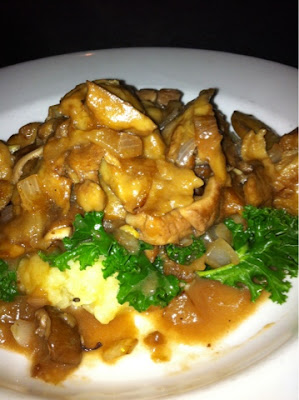 Lasagna was also percect except for the citrus vinegarette which was more like lemon sqeezed with some oil. The poblano dressing which our waitress brought was a delucious almost honey mustard which I'd recommend hands down instead. The layers had a creamy tofu ricotta cheese in addition to melted, stringy soy mozzarella.  The layers of eggplant and zucchini with quinoa for a toothiness was perfect especially so when slathered in the tomato sauce which was also deliciously robust and hearty. 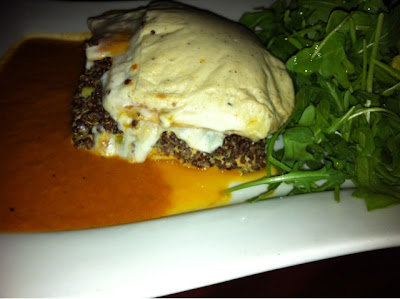 Dessert was insane. If the others were home runs this was a Grand Slam.  A thick chocolate mousse redefining rich with a chocolate cookie crust. Decadent. Glad we split one.

Pet peeve. A delicious cup of coffee is the perfect end to a meal. Please charge me extra if you must but soy creamer, not soy milk, is what is calling, nay screaming, to make it perfect.

This is not an inexpensive place to eat.  Aside from the first app I mentioned it was worth every penny though. 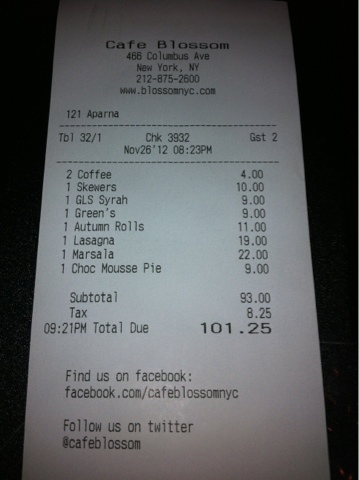 One of the best veg meals t in the city for sure! UWS location is somehow much better than the one in chelsea...
That seitan dish is crave-able-
Ttrockwood@yahoo.com