I drove right by it and didn't notice the sign.  We were on the way to the hotel and I'm always looking around for anything interesting in a new town but drove right by it.  And it's a big sign.  As big as any BK or McDeath sign.  So when I WAS looking for it, using my Vegout app on the iPhone, there it was bigger than life.  It's definitely a fast food place, no mistaking that. 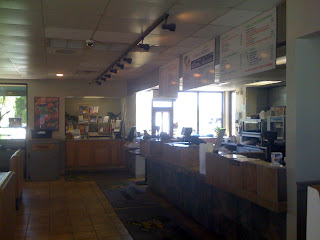 The counter and a great book display including restaurant copies for tableside reading.
I asked the kids at the front, (sorry, I'm getting to be that age), my standard question:  If I never came back here what should I make sure not to miss?
Turns out the concept here is pretty fantastic.  Take regularly available ingredients and make them fast foods.  The burgers are Gardenburgers and the Hot Dogs are Smart Dogs.  I wasn't impressed enough by all the various vegan toppings to ... bottom line ... order a burger that at best is neutral in my opinion.
I asked if anything was made there.  Chef Vinny came to the front and I found out he makes his own chicken, which is really Seitan.  Now I'm hooked.  I ordered the Southwest burger but with the chicken instead. 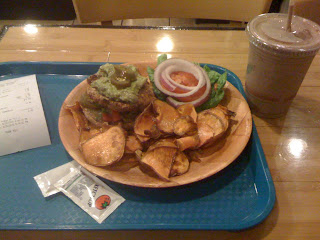 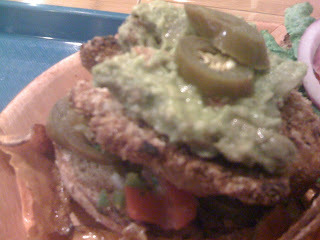 Nice plate of food.
A little blurry because I was starting to shake at the prospect of eating this!
Now the sweet potato fries, (yams actually), were a different story.  All greasy and very unappetizing.  Taking one for the team I sampled one.  The flavor was great.  I found out later that the fryolator was acting up and probably wasn't up to temp.  Vinny, my friend, next time the chips come out like that just 86 them would be my suggestion. 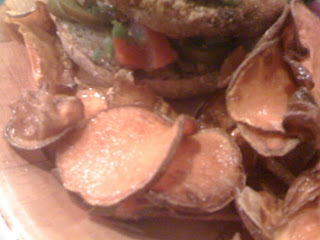 If you notice that chocolate drink on the tray it was soooooo chocolaty.  My young friend went so far as to put chocolate chips in the blender but alas, operationally, the straw was too small for the job and the chips kept clogging it up.  So I ditched the lid and downed half.  Unfortunately though, here is an example where vegan doesn't mean low calorie.  If you ask they will show you the nutritional breakdown.  Don't ask.  The shakes were between 500 and 700 calories.   Worth it as a treat for sure but not as part of your regularly scheduled happy meal.
Next morning on the way to the airport we stopped for breakfast, (and in my case lunch).  I had called ahead so my food was waiting but my associate, who before declined my invitation to order something, saw the Avocado sandwich and succumbed.  Although he said the bread was stale told me the sandwich was excellent.
I ordered a burrito called the Einstein which contained tofu scramble, soy cheese, mixed greens, tomatoes, avocado and beans.  I added the vegan sausage.  Unfortunately I couldn't eat it for several hours but it was great. 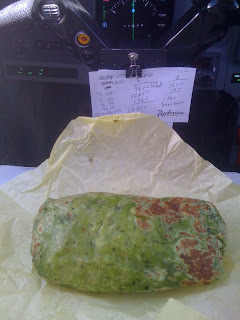 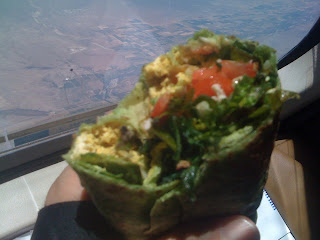 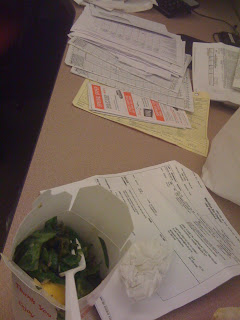 I had two other pictures which didn't come out but the mixed greens were something I wished every restaurant served, to eat in or take out.  I spilled the container out on a plate and it was a nice massive heaping bunch of Kale and Collards, a touch of agave, garlic and olive oil and 2 lemon wedges.  It was so crisp and refreshing even after all those hours sitting against the cold sidewall of the cockpit.
The Burrito Supreme had the seitan along with potatoes, chili, salsa, guacamole, and greens.  Man I do wish there were 10,000 of these places all over the country.
Posted by Marty at 4:05 PM