Candle 79 is one of my few meccas where just as with any other vegan restaurant, I start to relax as soon as I walk in ... except with an "up spin" of elegance.

We arrived exactly at 5 for our reservation and the staff was completing the setup so we enjoyed a Merlot an d and a Strawberry lemonade. We were led to my favorite table in the corner with an unobstructed view of the world going by on East 79th Street and Lexington Avenue. 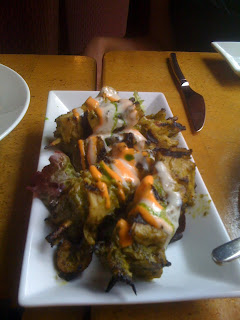 Appetizers were Angel's Nachos, Grilled Seitan Chimichuri, and Seaweed Salad.  The Chimi is pictured on the left and the Salad below.  We tore into the Nachos before I could get the camera out. 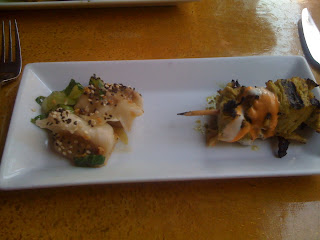 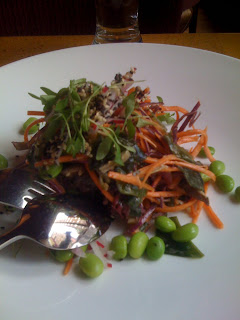 The Nachos had a great flavor and texture combination. I enjoy my food on the spicy side and was hoping for more of a kick from the chili grilled seitan. Still the dish was one of my favorites.

The Chimichuri had a great lime and grilled flavor and the chunks of seitan were incredibly satisfying. It would have been the perfect app but for the hair. John the manager did offer a replacement to both the Chimichuri and another appetizer on the house so we reset the experience and added the steamed dumplings.

The Salad looked beautiful and colorful and as we started to work on it we were were less than enthused. My daughter loves seaweed, (she's 10), and the seaweed was just a minor player in the salad and none of us cared for the taste and flavors.  We'll stick to the local Japanese place for our seaweed salad.  John saw we had half left on the platter and didn't charge us for it or either of the Chimichuri dishes or the Dumplings.

On another personal note, I don't think it makes a lot of sense to go to a place that has specialty dishes and order something you can get just about anywhere. I wasn't about to argue with my daughter over food choices so we ordered it but folks I highly suggest, at any place that has a specialty they are known for, to order that. Getting for instance, a salad, at a place like this is, imho, a wasted opportunity to taste something new and different. It might be the best salad in the world but it's still a salad.

The other order of Chimi arrived along with the dumplings. The aroma from the broth and greens the dumplings were sitting in was amazing. The Chimi was better than the first, (being sans hair and all). The dumplings were enjoyed by my wife and daughter but left me a little disappointed. I was expecting a bit more flavor in the filling. The broth however was a different story with a soy sauce, leek, and bok choy combination. When John returned to check up on us I suggested they just serve the broth and greens as a soup ... so look for that in the future. 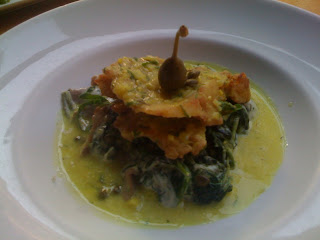 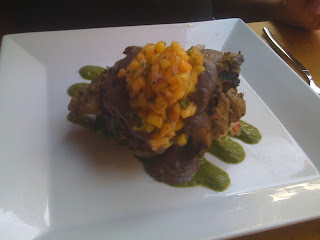 We got the special Cashew Encrusted Seitan, The Caribbean Jerk Seitan and the Seitan Piccata.

The Piccata was a wonderful dish, described by my daughter as THE most delicious, crunchy, right amount of tartness from the lemon, and the spinach was creamy and the mushrooms melted in your mouth. (per my daughter and I concur)

The Jerk Seitan was a Caribbean mixture of flavors and delicious but I missed the kick I expect from a Jerk.  My wife guarded her plate cautiously and devoured most of it loving every bite. 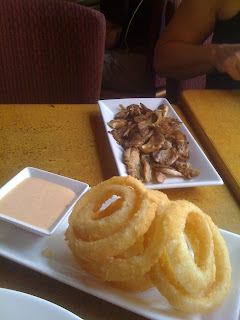 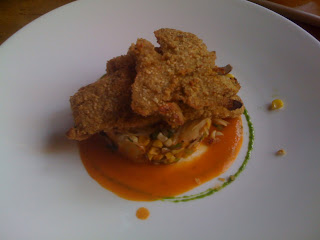 My Cashew Encrusted Seitan was the definition of comfort food. It came atop a ring of veggies, (although I thought the fingerling potatoes added a texture I wasn't quite sure belonged), with a subtle mixture of flavors and textures ringed with a red and green sauce.

Never ones to shy away from over ordering, for sides we ordered onion rings with a Chipotle Mayo dipping sauce and Polenta Fries with ketchup, and, (yes I said "and"), sauteed mushrooms. Wow. The light crusting on the onion rings was a delicate tempura crisp coating over perfectly cooked onion rings. The Chipotle was a nice addition but again, for my palate you could have dumped in the capsaicin.

The mushrooms melted in your mouth, seasoned perfectly.

And the Polenta Fries. Amazing. Crunchy and crispy on the outside and soft and creamy in the middle. 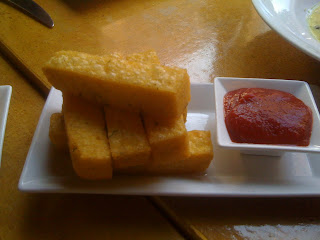 We dipped the two sauces interchangeably.

So you think we were too full for dessert? Not a chance.

One of the things that I think can either make a meal or break it is a cup of coffee at the end. My cup of decaf, (have to be up at 0400 to head off to work), was the perfect cup of coffee. Smooth and flavorful with a touch of sweet and soy creamer to round it off. 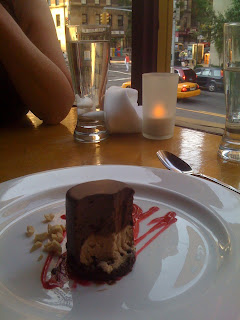 And of course we had to try the Peanut Butter and Chocolate. I was looking up the exact name and description but the dessert link on the website wasn't working. Not that one dessert would be enough of course we had to add a scoop of vanilla ice cream. The hard chocolate coating covered two layers of mousse; one of peanut and the other of chocolate. What an amazing combination of creamy intensity combined with the crunch of the hard chocolate coating.   The word luscious comes to mind.  I loved the ice cream but the omnivore at the table said it tasted like soy. I think it tasted phenomenally good but like all soy ice cream, (to me), had a slight tongue coating aftertaste. I thought it was great.

So, Candle 79 is a special occasion sort of place for us and aside from a glitch or two, (which were handled properly and graciously by John and our waitress Kimberly), it did not disappoint. It is now my daughters, "favorite vegan place on the planet."
Posted by Marty at 6:42 PM

i've yet to try Candle 79 out because it's a bit out of the price range for me. But I like Souen and Middle Eastern restaurants for a vegetarian meal. :)

I agree, Candle 79 for me is a special occasion place. Have you tried The Candle Cafe?

What kind of place are you looking for and in what neighborhood?