I was ecstatic when I found out my airline flight back east was put off until afternoon. Now I had my sights on a place I'd been to back in March and couldn't wait to get back to. It has "breakfast" written all over it. And for once, when I got up, I was HUNGRY. The airport Hilton is nice enough but I had to order up a fridge for the room, (as with most full service properties), and there was no guest microwave so my dinner last night was a huge salad somewhere over Nebraska at 38000 feet.

Getting up early in the west means sleeping in back east but then again, I didn't finish work until midnight so sleeping in until 730 wasn't really catching up on sleep

Green dragon and red lizard hot sauce. I tasted them but this breakfast had so much flavor it didn't really need hot sauce. For the record, green is Jalapeno based and red is Cayenne.

Side of in house nooch cheese sauce on top of the Gravy Train breakfast. Yes I double sauced it. Home fries, tofu scramble, sausage, peppers and onions. Ohhhhh, this defines breakfast. Salty and peppery potatoes cooked just enough to put a little crunch on the outside defines perfection in a cooked potato. The gravy is a tad heavy on the salt but 2 things: one I don't cook with much salt anymore and I may be hypersenstive and 2 gravy should be on the salty side. Just be prepared to grab a bottle of water later in the day. The nooch was just, well, noochy goodness and there was nooch in the scramble as well.

The tofu was VERY well mashed and didn't replicate the curds normally found in eggs but that's ok, it was more like a creamy eggy replica. It was also seasoned with more than just your basic salt and pepper and the mix is for sale at Cali's Natural Foods market in Salt Lake. I have to find out if they ship because it's a nice easy no brainer for those of you who are just flummoxed by the concept of a tofu scramble. (www.calisnaturalfoods.com)

I first thought the sausage was a slice of Lightlife but it's not, it's home made and took me by surprise. A delicious mix of brown rice based and seasonings, (sweet with fennel!), just a tad over center on the mush scale but it really didn't detract and we in veganland haven't perfected the consistency competition), and with an amazing mix of spices in the tofu scramble, well, if I lived here I might just give up cooking my own breakfast.

I ordered a Philly Cheese Steak for the airline flight back to Atlanta and my mouth is watering.  I got my notch sauce on the side and they did an amazing job wrapping the plates into this leakproof cocoon.  I was so psyched.  Then in Denver I open my lunch and ... 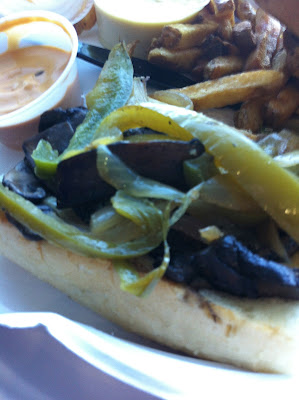 No seitan.  Arrrgh.  Well, the bread was nice and garlicy and the mushrooms, onions and peppers were nice and I smooshed everything in the two containers of sauce but it was sooooo disappointing.  Ah well, next time.

I took a look at the check and it appears that mushrooms are an OPTION as is the seitan steak.  I had one great waiter who actually brought this wrapped sandwich out to me in my car after I got a call to rush to the airport and left it on the table.  He was excellent.  The other guy who took my order, I don't know, but I'd have asked me a lot more questions before I put in an order for a vegetable sandwich.  Just saying. 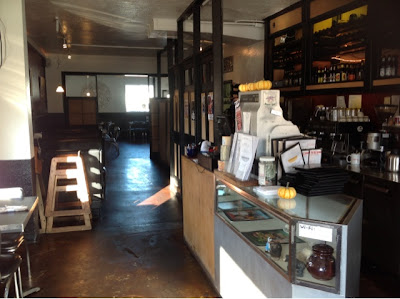 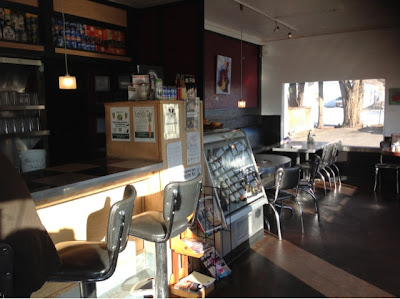