I had the opportunity several years ago to meet up with Lindsay at the Uptown Juice Bar in Harlem, NY and we got to spend a few hours talking and hanging out with some friends for a few hours.  It was a pleasure getting to know her on a personal level and I had always hoped to meet up with her on one of my charter flights to Ste. Maarten where she was living.  She currently lives in the states but for a charter pilot on the road, making plans is always a moving target, so perhaps it will be another time and another place.


I follow Lindsay's HappyHerbivore.com fat free/low fat vegan food blog and I had the opportunity to interview Lindsay, (via email), as part of the 31 Day promotion

for her new cookbook, Happy Herbivore Abroad.  Of course I asked Lindsay about a topic near and dear to me, namely, being on the road as a vegan.  I was also invited to do a giveaway of the new cookbook.  You can start entering as of today, 12/30/2012 and the drawing will be on 1/15/12.  (So before I forget, Happy New Year!!) 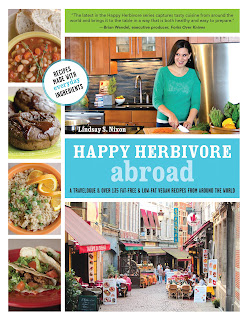 I enjoyed Lindsay's other cookbook, "The Happy Herbivore," in all aspects except that my old eyes had trouble with the small type.  That problem is unequivocally and thankfully solved in "Abroad"!  I also downloaded the ebook version and although I hate to have electronics in the kitchen, it did solve the problem.

I have so far made 2 recipes from the "Abroad" cookbook and both turned out very well.  Although I live in Manhattan and can easily hop on a train to Little India where I can find some of the most expansive spice stores in the world, and live, literally equidistant between two Whole Food Markets, there is nothing that you can't find in your local supermarket's spice or produce section in this books ingredient list.

The recipes are basic, simple, require no advanced technique or equipment other than a blender or food processor.

The Aloo Gobi used ketchup which I think came out a bit more in the finished flavor profile than I would have liked but I'll play around with tomato puree and sauce to change that up a bit.  (I'm a ketchup addict and pretty much see food as ketchup delivery systems, just so you know).  The recipe turned out a dish that was also a bit wetter than my previous attempts yet was no worse for it.  It did have a nice gentle Indian flavor profile.


The Lentil Loaf was also a straight forward and easy recipe and the results were a perfectly textured and hearty flavored loaf.  (I cheated and topped it with some pre made vegan mushroom gravy ... I know, I know, I almost just wanted to try the gravy more than I just didn't want to cook up some mushroom gravy.  It was a Shitake Mushroom Gravy from Road's End Organics and was totally acceptable as pre made gravies go.  Just add water.) 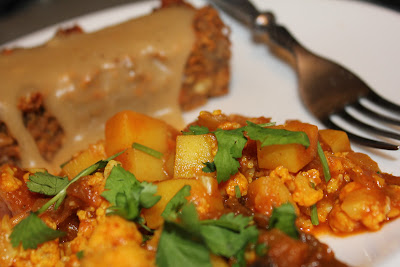 I love the fact that "Abroad" is an easy cookbook.  Sometimes you want to put together a recipe with 20 ingredients and sometimes you just want good tasty food, easily made, for your every day meal.  It's also a very nice smattering of recipes from all over the globe, so if you're looking for a particular culinary style, you'll in all likelihood find it here.

Although I did, (in the interest of full disclosure), get my copy as a review copy I can recommend this cookbook wholeheartedly.

Here is the interview and the contest information is at the end of the post.  Enjoy and good luck!!

1)  What was the best vegan meal you "stumbled" into?

I can't think of a favorite -- there have been so many wonderful meals, but I recently stumbled into a cafe in Ireland. It was a small village -- hours from the bigger cities. I didn't know if I'd find anything to eat but the chef was more than happy to create a special vegan meal just for me (and my husband). It was exceptional.

2)  Do you maintain your dietary "restrictions" regarding ingredients when you eat out?  How?

Always. I've never had trouble finding plant-based (vegan) fare traveling. It's not always the most convenient, but what's a little effort for great health?

3)  I've had this issue even in the US when servers' first language isn't English:  How do you handle a situation when you aren't sure what you're asking for isn't being understood completely?  (I've found the Veggie Passport app indispensable).

I speak a few languages, which helps, but I always have a phrase book with me with terms for food and ingredients, plus how to explain my dietary needs in their native language. I've never really had a problem. Even telling people "no oil" hasn't been much of an issue.

4)  If you're leaving on an extended trip, (I go out on the road for 15 days at a time), what few things are definitely in your cooler bag?  I am a coffee junkie, (well, for my first cup in the AM anyway), and my daily treat(s) is to have some vegan coffee creamer.  I usually take a container with me, (as a crewmember I can bring slightly more than the 2 point whatever ounces of liquid through security), along with some vegan protein bars in case I end up working a 14 hour day with no chance to go and find a meal.

I don't have a cooler bag. LOL. I take McDougall soups and oatmeals with me -- just add hot water. I like to have them in case I don't have time to stop and look for a meal. Eating in restaurants also gets tiring on me. so it's nice to have those options. I can't eat those vegan meal replacement bars -- they upset my stomach.

5)  What is the worst travel experience you've had regarding meals on the road?

Someone told me that the bean burrito at taco bell was vegan, if you leave off the cheese. My husband and I were in a very rural area, but they had a taco bell, so we decided to try it. WORST CHOICE EVER. I was so sick -- terrible stomach pains. Even if it was vegan, it's not real food. My poor stomach didn't know what to do with it. A reminder to stay off fast food!

Thanks Lindsay, and good luck with the book tour!

Great interview! I find that my healthier eating causes me to crave healthy food. It's like if I don't clog my senses with crap body asks for what it needs.

I would love to win

I am looking forward to the challenge of eating vegan in Greece in March!