My travels; is it "hard" to eat a vegan diet on the road? Day One

I do have a couple of posts to catch up on and a testimonial to write but the last 10 days off have been a whirlwind culminating in 2 days of the NYC Vegetarian Food Festival.  I was an Emcee for 2 stages on day one and 1 stage for day 2 and got to meet some of my icons in the vegan world.  The bummer was I didn't get to see any of the cooking demonstrations from the Natural Gourmet School.  Please forgive any inaccuracies as I'm trying to dash this entry off and don't have time to look up spellings.  (I hate to do this but this is going to be food blogging on the fly ... so to speak).

Terry Hope Romero, Laura Theodore, Ellen Jaffe Jones, Marisa Miller Wolfson, Brendan Brazier, Dr. Michael Gregor, Rebecca Gilbert, Gena Hamshaw and Matthew Frazier, and Jenny Brown to name more than a handful.  Also running around and meeting all the vendors and in a pinch filling in and conducting a Q & A when a scheduling snafu left an empty stage.

I just started my 15 day rotation and in discussing food, (one of a pilot's MAJOR concerns ... I know, you thought it was the safety of flight

This is in response to that statement.  I'm going to chronicle my food over the next 15 days.  What I ate, how and where I got it.  Just to show you that it can be done.

First day was crazy and had a The Simply Bar and a Purefit bar to stave off the hunger as a calm day turned into a scramble to plan a possible recovery flight, (to dash off and save the day when an airplane has a mechanical problem), then go back to plan A, then have a test flight for an airplane that just came out of maintenance thrown into the works, then go back to plan A again and head off to Michigan.

I packed a bag when I left the house.  It had an Amy's Breakfast and a Non-Dairy bean burrito, container of Silk coffee creamer, (my lifeblood), 2 half opened packages of Daiya cheese, half a bottle of Maple Farms Fat Free salad dressing, some Primal Strips, vegan jerky, Purefit and The Simply bars, a few small hummus containers and a half pack of Pepperidge Farms Deli Flats, and a bottle of hot sauce.  I think.  My room didn't have a microwave or fridge and my cooler bag is in the kitchen of the hotel right now.

So last night when I did arrive I heated up one the bean burrito with Daiya in the microwave, had some primal strips, a deli flat with one of the containers of hummus.  No eating out.

Today the free breakfast had packets of oatmeal that I wasn't in the mood for, (hoping for some cooked oatmeal), and no fresh fruit.  It truly is amazing how crappy we eat.  The only thing that wasn't processed or dead was a banana.  I had my breakfast burrito with daiya and hot sauce with a few cups of Silk lightened coffee.

There's a Meijer Supermarket across the street so I'm off to see what I can find there.  I am scheduled to be back in Teterboro tonight at about 3 in the morning so I'll have access to my car and a Stop and Shop nearby that has a few pretty good options.  (No Daiya yet but I asked the dairy manager to see about ordering some.  We'll see if that happened).

I went over to the Meijer and it truly is amazing how many vegan options are there.  I even found vegan ramen noodles.  Here's the pic of my Meijer adventure.  Now, how can I fit it all into my cooler bag?  One of the tricks I've come across it to ditch the packaging.  If something isn't in a soft plastic bag, repackage it. 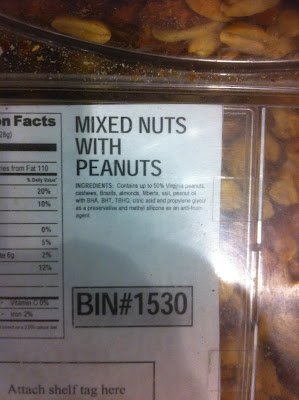 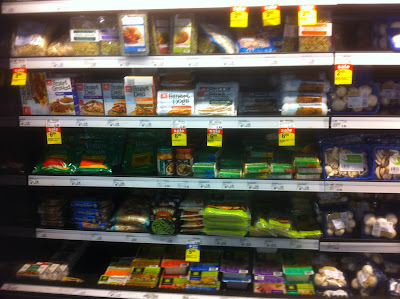 While in Teterboro later in the day, I topped one of the Boca Burgers with Daiya and popped it into the microwave.  It was a bit soggy but the Daiya was mmmmm ... Daiya.  I realized that the 100 calorie claim on the outside of the package of Arnold pocket thins was deceptive at best.  1/2 of the pocket is 100 calories so I should have stuck with my Pepperidge Farms Deli Thins.  Anyway I wolfed this down with a handful of the salad and some of my dressing.  I chomped a few carrots and a broc and that was it until we got back from out next trip (at 3am) when I wolfed down an untouched plate of delicious honeydew, a few paltry berries, some cant elope that tasted like potato and sweet and delicious pineapple.  That's it for today on the food front.

Day 3 (I think).
We got into the hotel around 4 AM, (now you know why I'm not sure what day this is), and have to be back at the airport at 230pm.  I woke up, had 2 cups of coffee with silk, the burrito with Daiya, some hot sauce, (neeeed hotter), and all of the fruit.  Total cost for breakfast.  Zero.

We're going to make a quick stop at the supermarket as our overnight tonight, (always in theory), is Minneapolis and we may be getting in a bit late to have many restaurant dinner choices.
Posted by Marty at 9:06 PM

Excellent article! Thanks for taking the time to post this.