As I chronicle my second day off and foray into culinary adventure you may ask what this picture of guacamole is doing here.  Well, my daughter made it from scratch and without a recipe and it was amazingly balanced.  Just the right amount of garlic and jalapeno, smashed just the right amount to give it a creamy yet chunky mouthfeel.  Oh, and I promised I'd put it on my blog.  Thanks for the indulgence.    Any hey you, thanks for the guac!
For years I went to Stuyvesant High School and took the L train from Canarsie to First Ave.  I got off on Broadway Junction for a while when I had a girlfriend in Queens but never got off any other stops on that line.  So this day I got off for the second day in a row ... this time on Graham Avenue.  I followed my Google maps down some not very busy residential streets and lo and behold, Boneshakers.
One of the delights of being off is that I can have a beer with lunch.  And beer and burgers has always been a favorite.  Beer and lunch is a favorite.  OK, beer is a favorite.

I've been asking a lot of questions lately about what is made in house and what is brought in.  I was told that the chicken I so loved at Foodswings has it's origins at May Wah in NYC where I get much of my veggie meats for my personal cooking.  "So what!" I say.  I don't have a deep fryer in my kitchen.  I'm just saying, you get an extra gold star if you make it yourself.  Nobody makes tempeh except the tempeh makers and of course the Ann Arbor Coop.  Boneshaker's seitan, apparently, is pre-made also.  That was one of the reasons I went with the in-house burger. 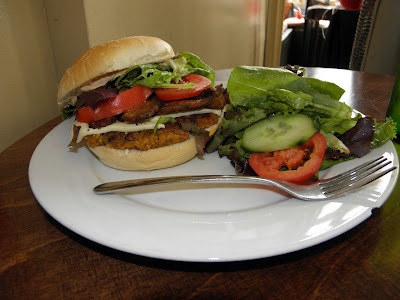 A zucchini, tempeh and wheat gluten mix gave the burger a nice mouthfeel although a smidge to the left of center on the smushiness meter.  There was a sear on the burger but it didn't translate into a crunch in the bite.  Nice taste though and with vegan cheese and Lightlife tempeh bacon along with a mild heat and chili flavor from the chipotle aioli made a really nice and very satisfying lunch.  Especially with a slug of beer in between bites.

One disappointment of omission is that they didn't have any hot wings and that seems to be percolating to the surface as my latest quest.  Hot wings.  Not things not on the menu. 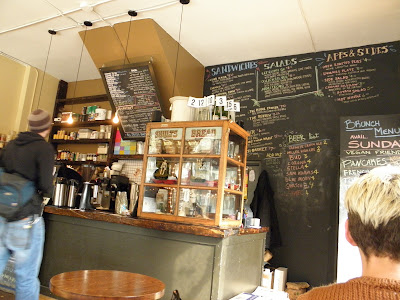 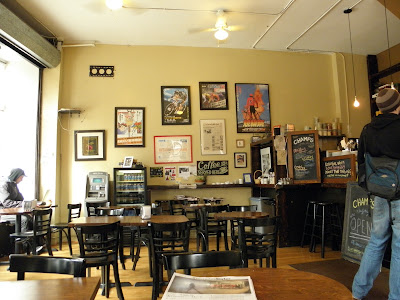 Bone crushers is a cross between a hipster coffee house and a vegan burger joint.  Plenty of wall reading material especially if you really peruse the menu blackboard.  Plenty of coffee options and a few beers.  Nice to choose if you want to go up or down when you look at the beverage section. 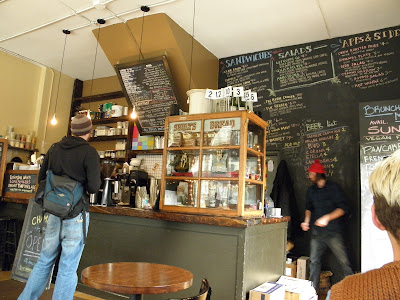 Did you notice the Cubano?  I'm definitely going back here for that.  I have such fond memories of early morning in Key West about a hundred years ago, chowing down on amazing flavors and textures with a Cuban coffee.  If the sandwich and coffee come half as close it will be a nice trip down memory lane.

I just wish this place wasn't so far out of the way for me.  45 minutes to commute for lunch.

Love Boneshakers! If I lived in Brooklyn, they wouldn't be able to keep me out.

Hi Marty,
Liked your review of the Good Egg Cafe/Pepper Club (my fav restaurant) in the Happy Cow. I put a link on my recent blog post: http://www.becomingwhole2.com/2010/11/the-good-eggpepper-club.html
Great blog!Like your Yelp map, too.

Boneshakers is definitely next on my list to try when I have time to go to Brooklyn again... it's pretty out of the way for me too, at least in the winter when it's too cold to just bike over.