I love these "who would have thunk?" places and Pawtucket definitely falls into that category.

I "Happy Cowed", well, actually I use Vegout on my iPhone, but this place came up and their website has a picture of some amazing looking soups so it was either that or trying some veggies at a sub shop.

It's great when we are at a place for a few hours and the place where we park has a crew car for us.  Landmark at North Central did and the service was great.  Unfortunately sometimes we can't buy gas or order any services to support that business but they do get a ramp fee and I'm happy to spend the company's money that way.  Off we went through the backroads of Northern Providence.

I drove by the place at first.  Then the other way I saw the address on a sign in a strip mall and turned in. 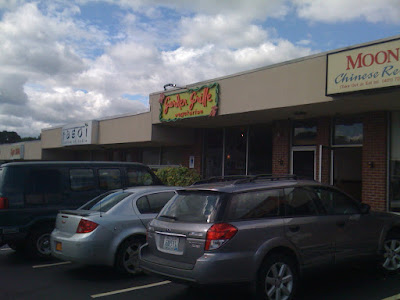 A beautiful place yet functional, bar and booths and tables.  And the amazing thing?  All filled.  All busy.
Folks, this place is in a strip mall sandwiched in between a Pizza joint and a chinese restaurant,  (and another eatery) and this was the place, according to Natalie our waitress, usually has a line out of the door. 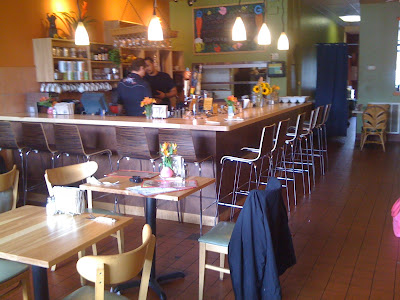 I love apps and I really enjoy sharing food which sometimes, on the road, depending on who your with, isn't viable.  We're sitting at the table (in our uniforms), and Natalie suggested we share some entrees and although we did end up doing that my answer to her, with a smile of course was, "Uhm, we're not married you know."    Some guys are funny that way.  I couldn't care less.  The more tastes of different stuff the better.

Anyway, back to the apps.  If you don't want to eat this picture there's something seriously wrong with you. 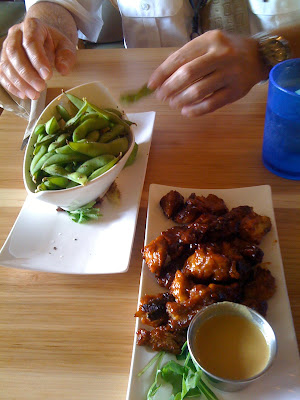 That is a salted bowl of Edamame and I got the Chipotle Glazed Seitan with the Wasabi Dipping sauce.
This reminded me more of an Asian dish than Mexican spiced but it was like eating fried sweet and sour chinese food from my PV days.  (Note to self, tell people about new abbreviations before you use them.  PV= Pre veg).  I found it more sweet and honey-ish than spicy but the wasabi cleared my sinuses with no problem.  We had edamame to take with us but if I had a piece of bread to sop up the plate it wouldn't have needed to even be washed.

Our two lunch entrees were the Soy Chicken wrap with mango salsa and the Seitan Mushroom burger.  There were many things I wanted to try but I'm trying to take one meal at a time so didn't order anything to go.  I wanted to try the mac n cheese but they only sold main dishes and at $12 it would have been an ok price for an entree but too steep for me to order just to taste. 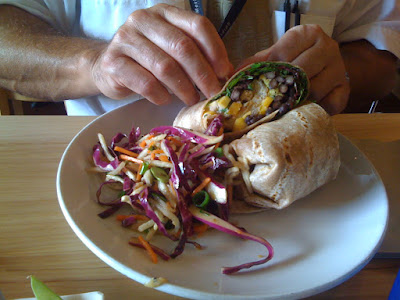 It's a burrito but with such a solid comfort food bite.  I really didn't taste any of the "chickeniness" of the soy chicken but it was there, breaded and added to the overall mouthfeel of the burrito.  I appreciated the "something more" than just rice and beans in a burrito and the chicken gave it that.  It was a delicious wrap and the sweet mango salsa I thought really shone through. 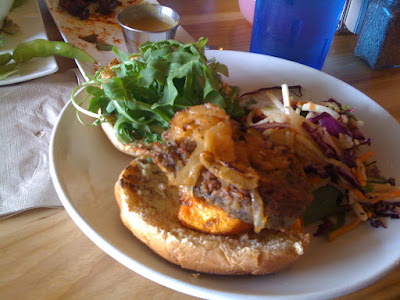 Natalie sold me on this dish saying, "The yams are in season you know." 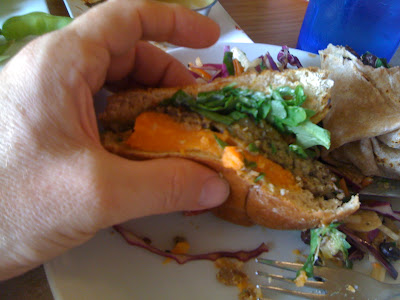 The greens, the onions, the burger, the yams and the sweetness of the bun all played so nicely together.
My big complaint about veggie burgers is the mushiness.  this burger was seared and although still had that bit of mush the crunch was very evident.
Nice earthy flavors made for a good tasting burger.  I'm still looking for something that reminds me of what my mom used to take off the grill on the back porch all those years ago but this made for a nice sandwich.
We were too full from the meal to order any desserts but my buddy later admitted that he had his eye on the Ginger Dark Chocolate cookie.
A look at the clock and we were out the door back to the airplane for our departure.
A very satisfying meal at an oasis in, well, who'd a thunk it, Pawtucket, Rhode Island.

Glad you enjoyed the review. Tell Natalie the pilot said hi and if you don't mind let them know where you found out about them.

I'm trying to spread the word about the blog.